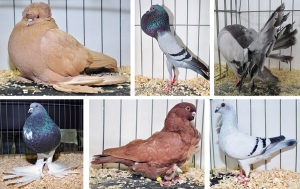 Domestic pigeons are almost as diverse as dogs breeds, but most appear to have been derived from the wild rock dove. (Clockwise from upper left: English trumpeter, Brunner pouter, fantail, Italian owl, Chinese owl, Pomeranian pouter.)

Humans have shaped the domestic pigeon into hundreds of breeds of various shapes, colours and attributes — a diversity that captivated Charles Darwin, who even conducted breeding experiments on his own pigeons. Now, a number of domestic and feral pigeon genomes have been sequenced for the first time, giving scientists a resource for studying the genetics of how these traits evolved.

The study, published online today in Science1, gives insight into the genetics of both 'fancy' domestic breeds and plain street pigeons and supports their common origin from the wild rock dove (Columba livia). "We go from having virtually no genetic or genomic resources available for the pigeon to being able to map regions associated with particular traits,” says team member Michael Shapiro, a biologist at the University of Utah in Salt Lake City.

The Utah team, along with Jun Wang and colleagues at BGI-Shenzhen in China and scientists at the University of Copenhagen in Denmark, sequenced a complete 'reference' genome from a breed called the Danish tumbler. The researchers also sequenced the genomes of 36 different fancy breeds and of two feral birds from different regions of the US.

The study fills in knowledge about the relationships between breeds, many of which are centuries old with origins in the Middle East. Darwin argued that all domestic pigeon breeds descended from the wild rock dove. Shapiro says this study puts data behind that argument, as all the breeds sequenced are more similar genetically to one another than to another, closely related, species of pigeon, C. rupestris. It also found that street pigeons are genetically similar to racing homing pigeons, which frequently escape into the wild.

One question is whether similar traits in different breeds, such as flouncy leg feathers or short beaks, are caused by the same genetic mutations. The researchers analysed head crests, feathers growing in the reverse direction to normal that vary from short tufts to outrageous manes that envelop the head. Breeding studies by pigeon fanciers suggested that head crests were caused by a simple recessive mutation. Using software developed for finding genes that underlie human diseases, the researchers analysed crested and uncrested breeds, and discovered a mutation in a gene that matched the crests in all cases. The results suggest that the mutation evolved just once in the species.

Head crests, Shapiro said, are “one of many traits that we see in domestic pigeons that have a correlate in lots of natural species of birds,” where they are used in courtship and displays of aggression. Further research will be able to discover whether the same gene is involved in creating crests in other species. In similar fashion, Shapiro says, scientists can use pigeon genetics to study the emergence of more complex traits.

Leif Andersson, who studies domestic animal genetics at Uppsala University in Sweden, says that the work addresses a gap in our knowledge about pigeons, which has lagged behind that of chickens, pigs and dogs. Domesticated species are important tools for comparative genomics, with traits honed by humans over thousands of years. “The different domestic animals complement each other,” he says, “because they've been selected for different purposes.”