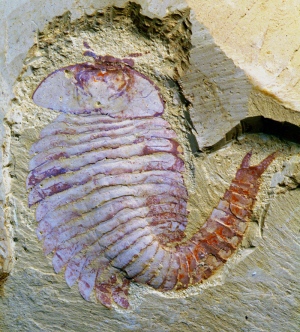 An ancient arthropod shows signs of having an advanced brain.

The Cambrian period, around 540 million years ago, was the heyday of evolutionary weirdos. The seas were home to an array of invertebrates that sported armoured body segments and compound eyes, together with many legs in amazing arrangements. But within all this diversity were the biological glimmerings that would connect Cambrian creatures to animals alive today.

Among the Cambrian menagerie was a small invertebrate called Fuxianhuia. Part of China’s beautifully preserved, 520-million-year-old fauna from the Chengjiang fossil site in Yunnan province, this 11-centimetre invertebrate was one of the earliest arthropods. And as palaeontologist Gregory Edgecombe of the Natural History Museum in London and his colleagues report today in Nature1, one specimen may contain traces of early neural anatomy.

Like other Chengjiang fossils, specimens of Fuxianhuia were quickly buried in low-oxygen environments that saved them from bacterial destruction. This high-resolution preservation sometimes included details of internal organs. In the case of one of the Fuxianhuia specimens analysed by Edgecombe and his colleagues, the animal’s delicate neural anatomy is preserved as a concentration of brown, iron-rich pigment staining the fossil. “We recognize it as a brain because its size, outline and position are comparable to those of a small brain in a crustacean such as a glass shrimp,” Edgecombe says.

The arthropod’s brain was composed of three segments, all fused in front of the mouth, and there are traces of neural tissue in the eye stalks. Edgecombe says that the striking similarity of the fossil's neural anatomy to that of modern insects and some crustaceans indicates that the "fairly sophisticated brain" of Fuxianhuia evolved to process high-resolution visual information. This discovery underscores the idea that the evolution of vision fuelled a Cambrian arms race between predator and prey. Given the presumed visual abilities of Fuxianhuia, and pieces of other arthropods called trilobites found in the gut of a related species, Edgecombe hypothesizes that the Cambrian arthropod might have been a visually acute predator.

A complex brain at so early a date “certainly throws up questions we weren’t anticipating”, Edgecombe says, such as whether the invertebrate’s neural anatomy is an early arthropod trait or evolved in a similar way to modern arthropods thanks to the advantages of keen vision. “The great thing,” Edgecombe points out, “is that we can address these questions with some new data from a source that we really haven’t had much to work with before — fossil brains.”

Palaeobiologist Graham Budd of Uppsala University in Sweden would like to see additional fossils for comparison. But he says that “all the details fit” for the traces to be remnants of a Fuxianhuia brain. Budd is not surprised by the brain’s intricate structure. “Any time a complex visual system started to evolve, there’d clearly be a strong selection pressure to optimize the neural systems that supported it,” he notes. Most importantly, he adds, the fossil presents researchers with “real data” about early arthropod brains that “throws the cat amongst the pigeons” in terms of previous hypotheses about how brains evolved. “That’s pretty exciting,” he says.

The Nature podcast team talks to Gregory Edgecombe about the complex brains of ancient arthropods.

But not everyone agrees that the structures preserved in the Fuxianhuia fossil can be interpreted unambiguously. According to Georg Mayer, who specializes in arthropod neuroanatomy at Leipzig University in Germany, “the preservation of the material is excellent, but the dark stain most likely represents a mixture of remnants of the nervous, muscular and digestive systems.”

Nevertheless, Mayer says, “Cambrian arthropods have complex body plans, so why shouldn't they have had complex brains?”. Whether or not the peculiar fossil does harbour a brain, palaeontologists think that Fuxianhuia and its Cambrian cohorts already had nervous systems capable of navigating through their complex and dangerous surroundings. In time, with more specimens, researchers will be better able to investigate whether the creatures' evolving brains reflected the Cambrian visual arms race.