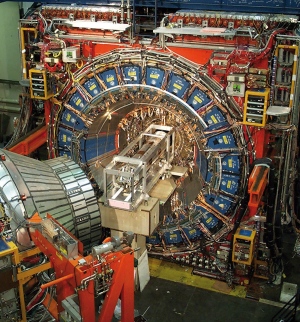 The CDF, one of the Tevatron's two detectors, is slowly surrendering its parts to other experiments.

It is a 4,000-tonne edifice that stands three stories high, chock full of particle detectors, power supplies, electronics and photomultiplier tubes, all layered like a giant onion around a cylindrical magnet. During 26 years of operation at the Fermi National Accelerator Laboratory in Batavia, Illinois, this behemoth, the Collider Detector at Fermilab (CDF), helped to find the top quark and chased the Higgs boson. But since the lab's flagship particle collider, the Tevatron, was switched off in September 2011, the detector has been surplus stock — and it is now slowly being cannibalized for parts.

When the Tevatron closed, Fermilab announced that the CDF would become an educational display. Along with its companion experiment, D0, the detector was supposed to form the centrepiece of a tour through simulated control rooms and decommissioned accelerator tunnels. But tight budgets for experimental particle physicists — combined with their tendency to tinker and recycle — are pushing the outcome in a different direction, at least for the CDF.

“Some parts are worth pennies, but in this budgetary climate, even pennies are worth saving,” says Rob Roser, who until recently was co-spokesman for the CDF and has now himself been recycled into a new position as head of scientific computing at Fermilab.

“Recycling equipment is as old as science itself,” says Jonathan Lewis, the Fermilab scientist in charge of decommissioning the CDF. And thrift is in fashion. With most of the action in particle physics taking place at the Large Hadron Collider near Geneva in Switzerland, US researchers were preparing for hard times even before US President Barack Obama released his 2013 budget request on 13 February (see Nature 482, 283–285; 2012). Although the Office of Science at the Department of Energy (DOE) got a 2.4% funding boost, the budget cut Fermilab's allotment by 5% and DOE funding for high-energy physics by 1.8%.

Looking for savings, Bogdan Wojtsekhowski, who leads three experiments to probe nuclear structure with an electron beam at the DOE's Jefferson Lab in Newport News, Virginia, convinced Fermilab to send him 600 photomultiplier tubes, which capture the light emitted as particles streak through detector materials. Buying them new would have cost $600,000.

The recycling reflects not only parsimony, but also a programmatic shift in US particle physics. With the shutdown of the Tevatron, researchers moved from the energy frontier, where physics is tested with particle collisions at the highest energies, to the intensity frontier, where the highest numbers of particles are collided. The fate of the CDF's parts mirrors this switch. 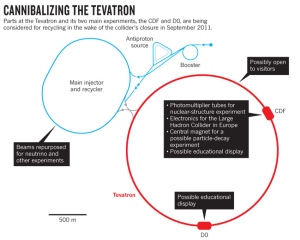 Some power supplies are going to Mu2e, an intensity-frontier experiment at Fermilab to look for the rare conversion of muons to electrons. Amplifier chips are going to g-2, another intensity-frontier experiment at Fermilab to measure a key magnetic parameter of the muon. Some scintillation materials, which emit light along the path of charged particles passing through them, are destined for the Long-Baseline Neutrino Experiment, which plans to send neutrinos 1,300 kilometres from Fermilab to the Homestake Mine in Lead, South Dakota.

Although most of the donations involve small items that would not stop the CDF from going on display, the most ambitious recycling request so far would see it gutted. A proposed experiment called ORKA, which would search for a predicted, but as yet unobserved, rare decay of kaon particles, needs a massive solenoid magnet like the one at the CDF's heart. ORKA has yet to be funded by the DOE, but the Physics Advisory Committee at Fermilab approved its scientific goals in December 2011.

Robert Tschirhart, co-spokesman for ORKA, says that adapting the magnet from the CDF by replacing some of its present detectors with a kaon detector may cost several million dollars. That would still be about half the cost of buying a new magnet.

Lab management will make a decision about whether ORKA can eviscerate the CDF in about 6 months' time.