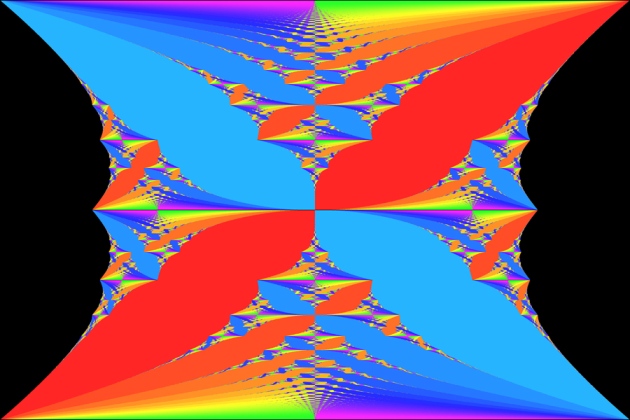 After a nearly 40-year chase, physicists have found experimental proof for one of the first fractal patterns known to quantum physics: the Hofstadter butterfly. Named after Douglas Hofstadter, the Pulitzer prizewinning author of the 1979 book Gödel, Escher, Bach, the pattern describes the behaviour of electrons in extreme magnetic fields.

To catch the butterfly, scientists have had to fashion innovative nets. Since May, several groups have published experiments that sought the pattern using hexagonal lattices of atoms; last month, others reported seeking it with atomic laser traps. Some physicists say that studying the pattern could help in the development of materials with exotic electric properties. But the main point of the chase was to check whether the butterfly looks as predicted.

“Hofstadter’s concept was initially disturbing to a lot of people,” says Cory Dean, an experimental physicist at the City College of New York. “Now we can say his proposal wasn’t so crazy after all.”

Hofstadter, now a cognitive scientist at Indiana University Bloomington, sketched out the pattern in the 1970s while a graduate student in physics. It was known at the time that electrons under the influence of a magnetic field would race around in circles. But Hofstadter found that in theory, if the electrons were confined inside a crystalline atomic lattice, their motion would become complicated. As the magnetic field was cranked up, the energy levels that define the motion of electrons would split again and again. When represented on a graph, those energy levels revealed a pattern that looked like a butterfly — and continued to do so, even when zoomed in to infinitely small scales.

Mathematician Benoit Mandelbrot had yet to popularize the term ‘fractal’ for such recursive patterns, and Hofstadter’s adviser was unimpressed. “He scornfully called the nesting pattern that this upstart youngster claimed to see, ‘mere numerology’,” says Hofstadter. “He even told me that I would be unable to get a PhD for this kind of work.” Hofstadter published1 his description of the butterfly in 1976, after finishing his PhD.

The idea was difficult to test. The strength of the required magnetic field depends on the spacing between the atoms in the lattice. In conventional materials, in which atoms are separated by less than one-billionth of a metre, the pattern can emerge only in fields on the order of tens of thousands of tesla. The best available magnets can reach only about 100 tesla, and for just a fraction of a second.

But smaller fields are sufficient in lattices with larger spacings, which can be created by layering materials in stacks. In May, researchers reported2 that they had stacked a single sheet of graphene, in which carbon atoms are arranged like a honeycomb, on top of a sheet of honeycombed boron nitride. The layers create a repeating pattern that provides a larger target for magnetic fields than the hexagons in each material — effectively magnifying the field.

After applying a field, the researchers measured discrete changes in the conductivity of the composite material — stepwise jumps that result from splits in the energy levels of its electrons. These were not a direct detection of the expected electron behaviour, but were a proxy for it. Hofstadter’s butterfly had not quite flown into the net, but it had revealed its existence. “We found a cocoon,” says Pablo Jarillo-Herrero, an experimental physicist at the Massachusetts Institute of Technology (MIT) in Cambridge. “No one doubts that there’s a butterfly inside.”

Nobel laureate Wolfgang Ketterle, another physicist at MIT, is going after the butterfly in a different way: by making atoms act like electrons. To do this, he chills rubidium atoms to a few billionths of a degree above absolute zero, and uses lasers to trap them in a lattice with egg-carton-like pockets.

When zapped by an extra pair of criss-crossed lasers, the atoms tunnel from one pocket to another. Tilting the grid allows gravity to guide the atoms into paths that mimic the circular motions of an electron in a magnetic field — although no actual magnetic fields are involved. The system can easily track the motion of individual atoms, and should be able to mimic a magnetic field strong enough to produce a Hofstadter’s butter­fly. “Cold atoms will give us an enormous freedom,” says Ketterle, whose team posted its study on the preprint server arXiv last month3. But the set-up has a liability: the lasers tend to heat the cold atoms, limiting the ability to control the energies of the particles and reveal the fractal pattern.

Still, if the heat can be handled and the butterfly simulated, this system could be a starting point for exploring quantum behaviours in solids, such as materials that can conduct electricity on the surface but are insulators at the core. Dieter Jaksch, a physicist at the University of Oxford, UK, says, “I expect that a wealth of new phenomena and insights will be found when exploring the butterfly.”