The swirling lines on Luciano Pietronero’s graphs look like the movements of wind or water mapped on a navigator’s chart. At bottom left, the trails look turbulent and unpredictable — gusts in a storm, perhaps, or white-water rapids. Further to the right, streams flow smoothly. But Pietronero, a physicist at the Sapienza University of Rome, is not plotting trade winds or ocean currents. The chart represents the trajectories of national economies, and it is, he claims, the best tool physicists have devised to forecast nations’ economic growth.

In a paper published on 11 February in PLOS ONE1, Pietronero and his colleagues say that the charts illustrate how the behaviour of some economies can be predicted accurately, yet others remain chaotic. “We are changing economic forecasting from subjective opinion to a matter of objective data that can be tested,” he says.

The results are the latest effort to create algorithms that predict whether nations will grow rich or stay poor. Economists are accustomed to thinking of a country’s growth prospects as shaped by a myriad of factors — not just the goods and services it produces, but also its degree of corruption and social disorder, the quality of its infrastructure and the education level and cultural preferences of its citizens. This way of thinking fuels plenty of arguments about future economic growth, but has not always led to reliable predictions.

In 2009 two researchers at Harvard University in Cambridge, Massachusetts, economist Ricardo Hausmann and physicist Cesar Hidalgo, unveiled the economic-complexity index (ECI), a single measure that they said could predict future economic growth better than any conventional indicator2. This measure is based on the diversity and sophistication of the products a country exports, from commodities such as coffee or cotton to more technologically complex products such as mobile phones and cars.

The essential insight of the duo was that the products a country makes are “a proxy measure for the capabilities of its firms and citizens,” explains Hidalgo, who is now at the Massachusetts Institute of Technology in Cambridge. He periodically publishes visualizations of trade exports online and has published growth predictions in a book, The Atlas of Economic Complexity.

Essential to the notion of economic complexity are analyses of the interconnected patterns — the ‘product space’ — of countries’ trade exports. Hausmann, a former minister of planning for Venezuela, today advises nations such as Colombia and Albania on how to develop a more sophisticated network of products.

In a series of papers published since 2012, Pietronero and his group have introduced two twists on Hidalgo and Hausmann’s concept. The researchers modify the algorithm to create an alternative index, which they call ‘fitness’, that places more emphasis on the diversity of a country’s products. And they take a different approach to predicting future growth. Whereas Hidalgo and Hausmann plotted income against economic complexity and created a single equation to predict future change for any country, Pietronero and his team follow each country’s individual trajectory on the chart, and measure whether past movements accurately predict future behaviour.

By doing so, the physicists found that in some regions of the plot, countries’ fortunes are chaotic and hard to predict. The reason could be that they rely heavily on raw materials — as Nigeria does on oil — or that they are buffeted around by external factors such as civil war, says Matthieu Cristelli, a physicist at the Sapienza University of Rome and a co-author of the study with Pietronero. 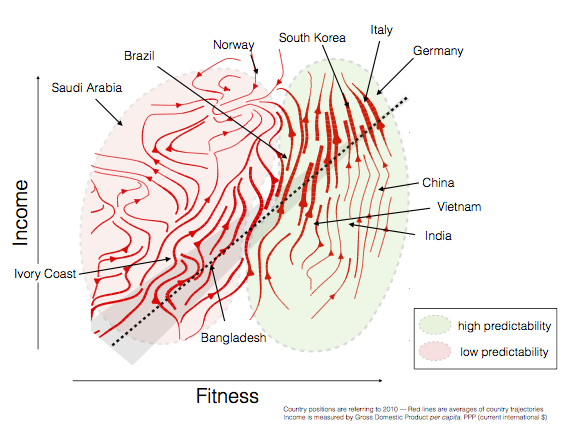 Some countries’ economies move predictably across a landscape of national income and ‘fitness’; others’ progress is more turbulent.

But in other areas of the chart, countries evolve in paths that are more predictable, much as layers of fluid move in parallel in a smooth river, says Pietronero (see video and picture above). That phenomenon is known in fluid mechanics as ‘laminar flow’. Cristelli says that a country with higher fitness is more resilient to external shocks that would make its progression chaotic. Political turmoil could still upset future forecasts, he warns. But in general, says Pietronero, the method results in a richer understanding of what makes a country’s economic performance predictable or not.

Unlike Hausmann and Hidalgo, Pietronero and his colleagues are not making the details of their future forecasts public because, Cristelli says, the researchers think the findings have commercial value. This makes it hard to make head-to-head comparisons of the two methods, says an economist contacted by Nature who did not want to be named.

But Pietronero and his colleagues say that their model makes a wider range of forecasts, though with varying degrees of confidence. For instance, Hidalgo and Hausmann predict that over 2009–2020, countries will lie on a bell curve of future growth centred at around 2% a year, with China on the extreme edge, growing at just more than 4% per year on average.

But in the Italians' plot, China is in the laminar-flow region, so it should continue growing at upwards of 8% per year until the end of the decade, Pietronero says. There are limits to his confidence: Greece is also in the laminar region, but its economy is not growing smoothly. For other countries, such as Nigeria, the team warns that the reliability of predictions is lower.

Pietronero says that his approach to modelling the dynamics of economies is gaining traction among financiers and economic policy-makers. Azimut Holding, an Italian firm that manages investment assets, is interested in the possibility of creating a fund that uses the forecasts, Pietronero says, and the UK Institute for Public Policy Research used his analysis in a December 2014 report on how to improve the country’s performance.

Asset managers use Hidalgo and Hausmann’s predictions as well, and the approach has been incorporated into the development strategies of countries including Peru, the Netherlands and the Dominican Republic, Hidalgo says.

“This is what scientists should be doing,” says Doyne Farmer, a mathematician at the Institute for New Economic Thinking at the University of Oxford, UK, who knows both groups’ work. He adds that many academic economists do not yet fully appreciate what physicists are bringing to their subject. “They are making powerful and important predictions — and economists ignore this at their peril,” he says.