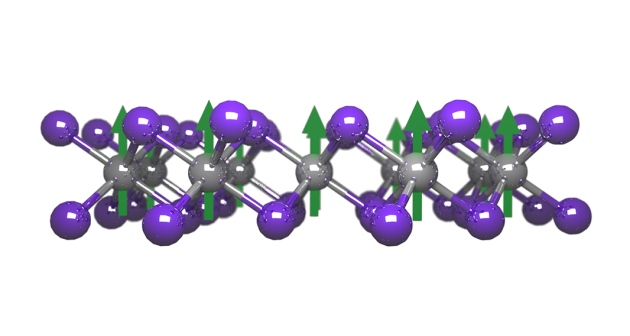 The latest addition to the 2D materials family is a magnetic form of chromium triiodide.

The number of 2D materials has exploded since the discovery of graphene in 2004. However, this menagerie of single-atom-thick semiconductors, insulators and superconductors has been missing a member — magnets. In fact, physicists weren’t even sure that 2D magnets were possible, until now.

Researchers report the first truly 2D magnet, made of a compound called chromium triiodide, in a paper published on 7 June in Nature1. The discovery could eventually lead to new data-storage devices and designs for quantum computers. For now, the 2D magnets will enable physicists to perform previously impossible experiments and test fundamental theories of magnetism.

Pablo Jarillo-Herrero, a condensed-matter physicist at the Massachusetts Institute of Technology in Cambridge, and Xiaodong Xu, an optoelectronics researcher at the University of Washington in Seattle, were searching for a 2D magnet separately before meeting in 2016. They decided to combine forces to investigate. “It’s a matter of principle — there is a big thing missing,” says Jarillo-Herrero.

Xu and Jarillo-Herrero worked with chromium triiodide because it’s a crystal comprising stacked sheets that can be separated using the 'Scotch tape method': a way of making 2D materials by using adhesive tape to peel off ever thinner layers. The scientists were also attracted to the compound because of its magnetic properties.

Like refrigerator magnets, chromium triiodide is a ferromagnet, a material that generates a permanent magnetic field owing to the aligned spins of its electrons. Chromium triiodide is also anisotropic, meaning that its electrons have a preferred spin direction — in this case, perpendicular to the plane of the crystal. These fundamental properties made Xu and Jarillo-Herrero suspect that chromium triiodide would retain its magnetic characteristics when stripped down to a single layer of atoms. That’s something other 2D materials can’t do.

The team found that not only was a single atomic layer of chromium triiodide magnetic, but also that this property emerged at what is considered a relatively warm temperature: about –228 °C. They also discovered that a two-layered sheet of this material isn’t magnetic, but when a third is added the substance becomes a ferromagnet again. The material remains magnetic if a fourth layer is added, but gains other properties the researchers say they’re still investigating.

Method in the magnets

Jarillo-Herrero and Xu aren’t the only ones studying 2D magnets. In late April, another group of researchers published their observations of magnetism in an ultrathin crystal made of chromium, germanium and tellurium2. A true 2D magnet would retain its magnetism at the single-atom layer, but this ultrathin crystal was only magnetic at multiple layers.

Both results are significant, however, says Nitin Samarth, a condensed-matter physicist at Pennsylvania State University in University Park, who was not involved with the work. Samarth wrote a commentary accompanying the recent studies. Before these discoveries, “we never had a generic method for creating truly 2D magnetic materials,” he says. Researchers have been trying to make and study ultrathin magnets since the 1970s, but all the resulting materials contained holes and bumps, and weren’t truly 2D.

Physicists would like to find a 2D magnet that works at room temperature and that doesn’t have to be protected from oxygen, so that it might eventually be used in consumer electronics. For now, Jarillo-Herrero and Xu are looking for other 2D magnets in chromium triiodide’s chemical family, and further exploring the one they’ve created.

It’s too early to tell whether there’s something fundamentally new here in terms of the physics, says Samarth. But now that physicists can experiment with 2D magnets, they’re excited to try to find out.

This story originally stated that electron spins are arranged in opposite pairs in a semiconductor. It should be in a superconductor. The piece has been corrected to reflect this.