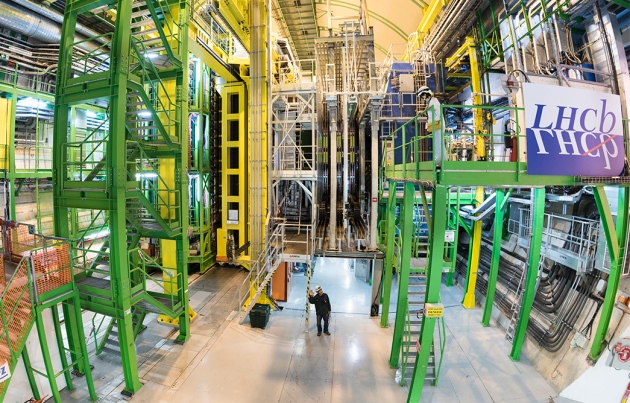 Physicists are debating whether data from the LHCb, shown here, hint at a new particle or are just statistical artefacts.

The latest in a series of anomalies spotted in five-year-old data from the Large Hadron Collider (LHC) could point the way to an entirely new elementary particle, physicists hope.

The most recent finding, reported at an 18 April seminar at CERN, Europe's particle-physics lab near Geneva, may turn out to be a statistical fluctuation that fades as new data are analysed. But it is intriguing because it seems to chime with previously-reported oddities. And it matches the predictions of new physics that some theorists had already made based on those earlier reports.

Particular short-lived particles called B-mesons, created when the LHC smashes protons together, seem to be decaying in unexpected ways, Simone Bifani at the University of Birmingham, UK, told physicists at the CERN seminar.

The standard model of particle physics predicts that pairs of matter-antimatter particles should be among the B-mesons’ decay products: and specifically that electron-positron pairs and muon-anti-muon pairs should be found in roughly equal numbers. (The muon is a heavy cousin of the electron). But researchers see more of the electron-positron pairs, Bifani said, based on data collected at the collider’s LHCb experiment.

This could just be a statistical fluke, says Guy Wilkinson, a physicist at the University of Oxford, UK, and the spokesperson for LHCb. In the latest study, researchers looked at two separate groups of data from LHCb on B-meson decays, and in each case found an anomaly with a statistical significance below 2.5 sigma (a measure of statistical confidence). That falls far short of the 5 sigma threshold usually needed to claim a ‘discovery’.

But the LHCb has already spotted a number of similar anomalies to do with meson decay, Wilkinson notes, and in particular with various types of B-mesons. None are yet statistically significant, but they point in the same direction. “There have been strange things happening over the last five years,” he says.

Some LHC physicists are not so sure that the announcement was worth the buzz it has received among researchers. CERN physicist André David, for example, tweeted that “piling up a sigma here and a sigma there" does not make for a discovery.

Still, theorists had already been positing new physics based on the earlier findings. And excitingly, the latest B-meson decay results are consistent with these ideas, says theorist David Straub at the Technical University of Munich, Germany. Straub posted a paper to the arXiv website yesterday analyzing the latest meson-decay results; five other theory papers have also been posted, and more are likely to follow. “The community was watching these results with quite some interest,” says Juan Rojo, a theorist at the Free University of Amsterdam.

The most obvious way to explain the results — if they are not a statistical fluke — is that as B-mesons decay, novel particles not predicted in physics’ standard model make a fleeting appearance that affect the decay products, the six papers agree. One possibility is that there could be a heavier cousin of a particle known as the Z boson, called Z'. Another explanation is the existence of a ‘leptoquark’, a boson that would share some properties with both leptons and quarks.

Neither of these particles occurs in theorists' favourite schemes for extending the standard model, but researchers say that if they exist, the LHC's bigger experiments — ATLAS and CMS — should be able to create them directly, rather than looking at their effects on the decays of other particles.

The LHCb's latest analysis is entirely based on data from the LHC’s first run, which ended in early 2013 when the collider shut down for an upgrade. Since the collider reopened in 2015 for its second run, LHCb and the other experiments have bagged considerably more data. Several more studies of B-meson decay are now under way. So, before the end of the year, the mystery might be solved.

"We have enough data on tape to validate or disprove these effects. The truth will out," says Wilkinson.