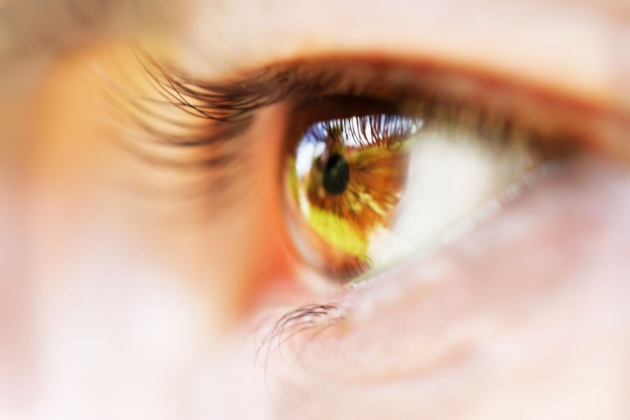 The human eye: a sensitive photo-detector.

People can detect flashes of light as feeble as a single photon, an experiment has demonstrated — a finding that seems to conclude a 70-year quest to test the limits of human vision.

The study, published in Nature Communications on 19 July1, “finally answers a long-standing question about whether humans can see single photons — they can!” says Paul Kwiat, a quantum optics researcher at the University of Illinois at Urbana–Champaign. The techniques used in the study also open up ways of testing how quantum properties — such as the ability of photons to be in two places at the same time — affect biology, he adds.

“The most amazing thing is that it’s not like seeing light. It’s almost a feeling, at the threshold of imagination,” says Alipasha Vaziri, a physicist at the Rockefeller University in New York City, who led the work and tried out the experience himself.

Experiments on cells from frogs have shown that sensitive light-detecting cells in vertebrate eyes, called rod cells, do fire in response to single photons2. But, in part because the retina processes its information to reduce ‘noise’ from false alarms, researchers hadn’t been able to confirm whether the firing of one rod cell would trigger a signal that would be transmitted all the way to the brain. Nor was it clear whether people would be able to consciously sense such a signal if it did reach the brain. Experiments to test the limits of human vision have also had to wait for the arrival of quantum-optics technologies that can reliably produce one photon of light at a time.

In June 2015, physicist Rebecca Holmes, who works with Kwiat, reported evidence that humans can sense light flashes containing as few as three photons. (Those results are still unpublished, Kwiat says.) But that team had not yet tested the ultimate threshold of perception — the response to single photons.

In Vaziri’s experiment, three volunteers sat in total darkness for around 40 minutes, and then stared into an optical system. When they pushed a button they heard two sounds, separated by one second. Sometimes, one of the sounds was accompanied by the emission of a photon. The participants had to say on which occasion they thought they saw a photon, and how confident they were (on a scale of 1 to 3) about their sighting.

In many cases, they got it wrong; this is to be expected, given that more than 90% of photons that enter the front of the eye never even reach a rod cell, because they are absorbed or reflected by other parts of the eye. Still, participants were able to answer correctly more frequently than would be expected if they had guessed at random — and their confidence level was higher when they were right.

The three volunteers sat through a total of more than 2,400 trials in which a single photon was emitted (and many more in which it was not). That high volume of testing, the researchers say, gives them strong statistical evidence of single-photon detection.

But not all researchers think the paper is conclusive. “The only thing that I am sceptical about is that only three individuals have been tested,” says Leonid Krivitskiy, a physicist at the Agency for Science Technology and Research in Singapore. All of them were male, he adds, and the visual physiologies of women and men are known to be subtly different, he points out. But Krivitskiy is convinced that the authors’ method is capable of settling the question once and for all, if the experiment is tested on more volunteers.

Vaziri plans to test how the visual system responds to photons in various quantum states — in particular those that are in a ‘superposition’ of two simultaneous states. Some physicists have suggested that such experiments could test whether a superposition of two states could survive in a person's sensory system, and perhaps be perceived in the brain.