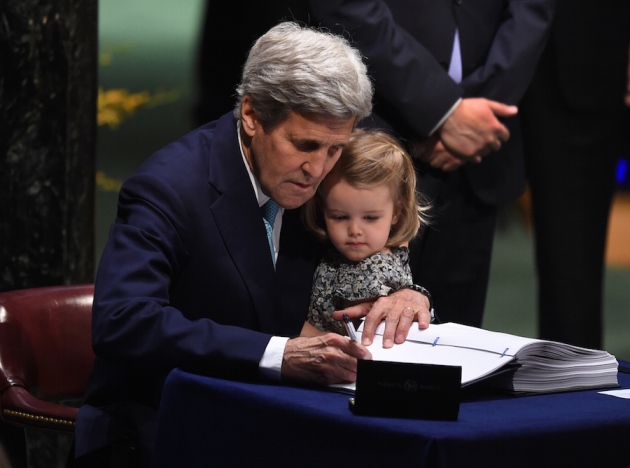 US Secretary of State John Kerry signs the Paris climate treaty while his granddaughter watches.

Representatives from more than 175 nations signed the Paris climate accord at the United Nations in New York City on 22 April. Global leaders celebrated the event — timed to coincide with Earth Day — with considerable fanfare, but countries must still take more action to implement the December 2015 agreement, which seeks to limit global warming to between 1.5 °C and 2 °C.

Nature examines what must happen for the accord to take legal effect — and, ultimately, to achieve its goal.

What is the significance of this week’s signing event?

Most importantly, the event was an opportunity for countries to demonstrate their commitment to the UN process. The Paris accord is the first legally binding climate agreement since 1997, when developed countries agreed to curb emissions under the Kyoto Protocol. The Paris accord would create a system that requires all countries to take action, but its adoption by 196 nations on 12 December was just the first step.

Signing the agreement represents a formal pledge to fulfil promises to reduce emissions. French President François Hollande and 54 other heads of state attended the event today in New York City. And UN officials say that the agreement is poised to attract a record number of signatures on its first day, compared to other UN treaties. But the climate pact will not take effect until 55 countries, which together account for 55% of global greenhouse-gas emissions, have submitted formal ratification or acceptance documents.

The signing “creates political momentum, but it doesn’t guarantee the substance and ambition that we need to see”, says Alden Meyer, director of strategy and policy for the Union of Concerned Scientists in Washington DC.

When will the agreement come into force?

It’s not clear. Fifteen countries — mostly small island states, which have been among the most vociferous advocates for aggressive action — completed the acceptance process on 22 April. China, the United States and the European Union have all pledged to move forward as quickly as possible, and there is broad support among many developing nations. But the process is different in each country.

In the United States, for instance, President Barack Obama will simply use his executive authority to submit formal acceptance documents. In China, the National People’s Congress must ratify the agreement, and there is little doubt that this will happen. But the process could take longer in the EU, where the governments of 29 countries must first take action individually before the bloc can act.

Environmentalists are pushing governments to move quickly so that the agreement can take effect before the next UN climate meeting, in Morocco in November, but this deadline is ambitious. As it stands, more than 30 countries accounting for some 49% of global emissions have either completed the process or committed to doing so as early as this year, according to the World Resources Institute, an advocacy group based in Washington DC. Regardless, few expect the process to take as long as it did with the Kyoto Protocol, which took more than seven years to enter into force.

The United States pulled out of Kyoto. Could it do the same with the Paris accord?

Technically, yes. The top Republican presidential candidates, businessman Donald Trump and Texas Senator Ted Cruz, have criticized the agreement and expressed scepticism about the underlying science. But it wouldn't be easy for the United States to pull out, says Elliot Diringer, executive vice-president of the Center for Climate and Energy Solutions in Arlington, Virginia.

The main objection to the Kyoto Protocol, voiced by the US Senate in a 95–0 vote in 1997, was that major developing countries were not required to act. But that is not the case with the Paris accord. Furthermore, polls show public support for a treaty that requires collective international action, Diringer says, and the United States would face an international backlash if it suddenly reversed course.

“Walking away from the agreement would instantly turn the US from a leader into a defector,” Diringer says.

Negotiators have yet to pin down a variety of details. Notably, the Paris agreement does not specify what kind of information countries must report on greenhouse-gas emissions, even though this will be crucial when it comes to verifying whether governments are following through on their commitments. Questions also remain regarding the amount and type of financial support that developed countries will provide for developing countries. Negotiations on those points will face their first major test  at the November meeting in Marrakesh.

Countries’ current climate pledges to the UN will not hold temperatures to below 2 °C, so the biggest question is whether the Paris agreement will spur nations to strengthen their commitments. They are expected to review progress in 2018 and update their commitments in 2020.