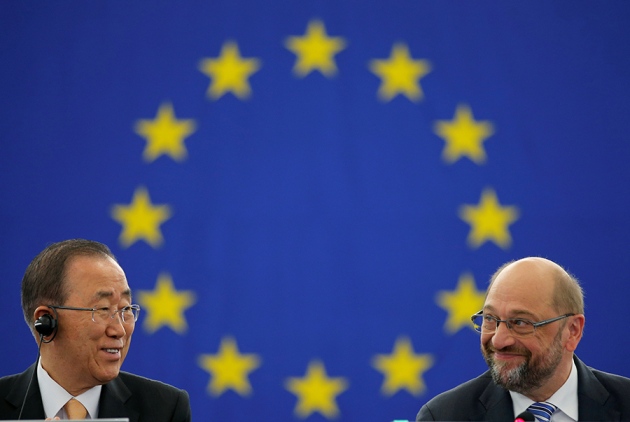 The Paris climate pact is set to enter into force as soon as next month, after the European Parliament voted on 4 October for the European Union to ratify the agreement.

The 2015 accord, which seeks to hold warming "well below" 2 °C above pre-industrial temperatures, must be ratified or otherwise formally joined by 55 countries accounting for 55% of global emissions to take effect. More than 60 countries, including China and the United States, have already joined the accord, and ratification by the EU, the world’s third-largest greenhouse-gas emitter, would push the pact past its other legal threshold.

The EU has previously agreed to cut its emissions by 40% by 2030, relative to 1990 levels. But each of the nation’s member states must ratify the Paris agreement separately, and observers feared that lack of consent among the bloc’s member states over their respective share to the EU-wide reduction target might delay the Paris pact until at least 2017. They had also worried that the United Kingdom’s decision to leave the EU might cause further delay.

In a surprise move, EU heads of states agreed last week that the bloc, which has long been pushing for international agreement on climate action, should move on a faster track. “It would have been very embarrassing for the EU, of all countries, to further delay the start of the Paris agreement,” says Oliver Geden, head of the EU Research Division at the German Institute for International and Security Affairs in Berlin.

As a result of Parliament’s vote, the EU is expected before the end of this week to formally submit its ratification documents to the United Nations in New York City. Given that not every EU member state is taking similarly rapid action to ratify the Paris pact, it is not clear whether the bloc’s entire share of global emissions can yet be counted as part of the accord. But seven member states that have already completed their ratification procedures — France, Hungary, Austria, Germany, Slovakia, Portugal and Malta — will submit their formal documents to the United Nations along with the EU, says European Commission spokesperson Anna-Kaisa Itkonen. That will be sufficient to push the Paris accord into force.

The deal will take effect on the 30th day after the United Nations receives formal ratifications that meet the 55% threshold — now likely to occur before the launch on 7 November of the next United Nations climate meeting in Marrakesh, Morocco.

“Despite its internal conflicts, the EU has shown that it is still capable of action,” says Geden. “That’s a diplomatic success and really quite a surprise.”