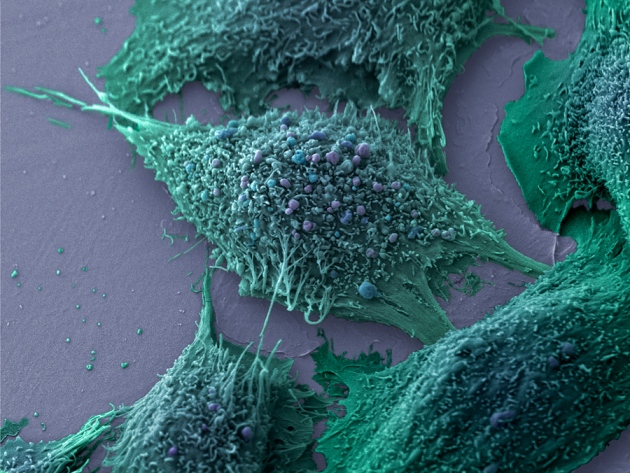 Researchers are seeking commonalities among different types of tumours, including lung cancer.

A ‘pan-cancer’ analysis of more than 3,000 genomes across 12 different kinds of tumours has looked for the commonalities that cross tissue boundaries. The earliest results, published in Nature Genetics1, 2, reveal more than 100 regions of the genome that may contain previously undiscovered drug targets, and that could provide the foundation for a new classification of tumours that better matches individual patients to the treatment most likely to drive their cancer into remission.

Lumping together cancers of different organs can provide insight into common pathways that give rise to the disease. It also allows researchers to boost the number of samples in their data set. More samples often means greater statistical power to find genomic changes associated with cancer.

“It’s the next wave of cancer genome analysis,” says Tom Hudson, director of the Ontario Institute for Cancer Research in Toronto, who was not involved with the work. “This gives us a lot more power to detect commonalities that could have been missed analysing a single tumour type at a time.”

The approach also adds fuel to the growing movement to stratify tumours on the basis not only of their organ of origin, but also of molecular characteristics — an approach that is gaining importance as pharmaceutical companies roll out a new generation of cancer therapies targeted to treat tumours that have specific genetic mutations.

The pan-cancer studies harness data from the Cancer Genome Atlas, a project funded by the US National Institutes of Health to collect genomic information, including the sequences of all genes that encode proteins, from more than 20 cancers represented by up to 500 tumours each. This programme and others like it, including an international effort co-founded by Hudson, have been pumping out a steady stream of data and findings, such as genes newly associated with cancer that could serve as the basis for novel therapies.

But those analyses have generally stuck to a single tumour type. After a while, says systems biologist Josh Stuart at the University of California, Santa Cruz, researchers on the project began to get a sense of déjà vu. While working on a breast-cancer data set, for example, they would see patterns in the data that they had previously seen in an ovarian-cancer data set.

In October 2012, Stuart and others decided to systematically analyse the data across tumour types. While they were organizing a collaboration to do so, Stuart says, they planned ahead, estimating that the project might generate about five papers.

One year later, there are 18 papers slated for publication in the coming weeks, with another 60 at various stages of drafting, says Stuart. In one of the papers appearing today, cancer researcher Rameen Beroukhim of the Broad Institute in Cambridge, Massachusetts, and his colleagues analysed data from 11 tumour types in search of regions of the genome that had been duplicated or deleted in cancerous cells more often than would be expected by chance. Their analysis revealed 140 such regions, each of which could harbor extra copies of genes that fuel the disease, or deletions of genes that suppress tumours1.

Of those 140 regions, only 35 contained genes previously known to be associated with cancer — a testament, says Beroukhim, to the increased power of analysing a larger data set. “Despite all the data that have been pouring in lately, there’s still much to be discovered about the cancer genome,” he says.

In the other study published today, computational biologist Chris Sander and his colleagues at the Memorial Sloan-Kettering Cancer Center in New York used genomic data to reclassify tumours based on their genomic anomalies they carry, rather than the organs in which they were initially found. The resulting categories sometimes yielded clues to which therapies might work best against those tumours.

The work is a promising first step, but such classifications will need to be tested in clinical trials before they can be used to guide treatment, says Hudson. In the meantime, he adds, he expects to see many such analyses in the coming months.

“I think there’ll be a lot of competition for ideas to find the optimal way of classifying tumours,” says Hudson. “And it’ll have to be updated every six months as we get more data.”

There should be no shortage of data to analyse: Stuart says that there is already talk of expanding the analyses to include full-genome sequences of up to 2,000 tumours. Such a project would allow researchers to explore changes in regions of the genome that do not code for proteins, and to reconstruct all of the genomic rearrangements that can give rise to cancer, he says.