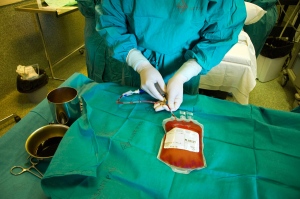 Bone marrow such as this being prepared for a transplant might be easier to extract with the help of aspirin-like drugs.

Aspirin-like drugs could improve the success of stem-cell transplants for patients with blood or bone-marrow disorders, a study suggests. The compounds coax stem cells from bone marrow into the bloodstream where they can be harvested for use in transplantation — and they do so with fewer side effects than drugs now in use.

For patients with blood disorders such as leukaemia, multiple myeloma or non-Hodgkin’s lymphoma, transplantation of haematopoietic stem cells — precursor cells that reside in the bone marrow and give rise to all types of blood cell — can be an effective treatment.

Previous work has shown that prostaglandin E2, or PGE2, a lipid known to regulate multiple bodily reactions including pain, fever and inflammation, also has a role in keeping stem cells in the bone marrow1, 2. In the latest study, researchers show that in mice, humans and baboons, inhibition of PGE2 with non-steroidal anti-inflammatory drugs (NSAIDs) causes stem cells to leave the bone marrow.

The team gave baboons and humans an NSAID called meloxicam. They saw a subsequent increase in the numbers of haematopoietic stem cells in the bloodstream.

The researchers think that the departure of stem cells is caused by the disturbance of a group of bone-forming cells called osteoblasts. These cells secrete a protein called osteopontin that hooks the stem cells to the bone marrow. Inhibiting PGE2 would disrupt the production of osteopontin.

At present, doctors use a drug called filgrastim to mobilize haematopoietic stem cells in donors or in patients undergoing autotransplantation (in which they receive their own stem cells). In patients with multiple myeloma or non-Hodgkin’s lymphoma, however, and in some donors, stem cells don’t mobilize well with filgrastim and other drugs in its class. Using NSAIDs such as meloxicam could enhance filgrastim’s efficacy, says lead author Louis Pelus of the Indiana University School of Medicine in Indianapolis. The study appears in Nature3.

Meloxicam also has comparatively few side effects, says Pelus. He and his colleagues found that other NSAIDs, including aspirin and ibuprofen, can also mobilize haematopoietic stem cells, but these drugs can cause gastrointestinal upset in patients. “PGE2 controls the secretion of hydrochloric acid in the stomach, and when you block that you’ve reduced your ability to control acid secretion. Meloxicam doesn’t do that as badly as many of the other [drugs] do,” he says.

For Charles Craddock, director of the blood and marrow transplant unit at the Queen Elizabeth Hospital in Birmingham, UK, the results might also hold clues about how to mediate the tricky process of getting cells back to the bone marrow once transplanted. “If you’re beginning to understand what mediates cells moving out, you might be able to understand what mediates cells moving in. If you can make bone marrow more ‘sticky’, when you put cells back, you might be able to keep them in.”

The researchers are now planning to test filgrastim and meloxicam in combination in a clinical trial at Indiana University. Because both drugs are already approved by the US Food and Drug Administration, “it’s just a matter of running the trial”, Pelus says.