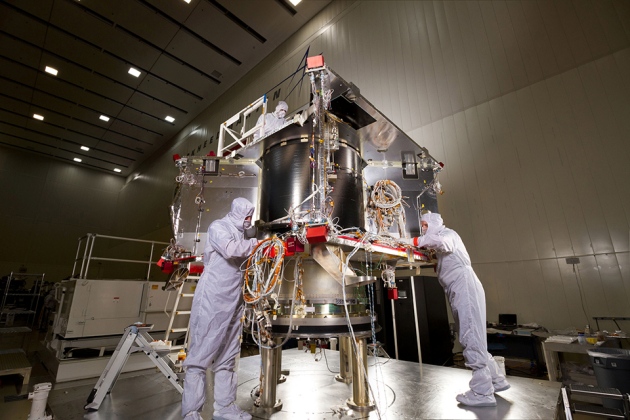 The OSIRIS-REx spacecraft has a special arm to collect rocks and dust from the asteroid Bennu.

On 8 September, a NASA spacecraft is set to launch on a seven-year mission to retrieve rocks and dust from a near-Earth asteroid called Bennu. Those samples could help scientists to better understand the origins of the Solar System’s planets — and, perhaps, of life itself.

Called OSIRIS-REx, the mission comes as a handful of companies pursue controversial plans to mine asteroids, in search of rare minerals or even fuel for extended space missions. If the NASA effort succeeds, it will serve as a proof of concept for more ambitious attempts to exploit asteroids for scientific or commercial gain.

“We’re cheering for them for a successful launch and mission,” says Chris Lewicki, president and chief executive of Planetary Resources in Redmond, Washington, a company that is developing technology to mine asteroids. Extracting resources from space rocks, he says, will “unleash the economic potential of exploring the Solar System”.

OSIRIS-REx’s target, Bennu, formed about 4.5 billion years ago at the same time as Earth and the other planets in the Solar System. It is just 500 metres wide and travels at more than 100,000 kilometres per hour. NASA scientists chose Bennu because its nearly circular path brings it within 300,000 kilometres of Earth every six years, making it relatively accessible. And unlike many smaller space rocks, it does not rotate so quickly that it flings off debris that could harm a spacecraft.

But grabbing a sample will not be easy. After OSIRIS-REx enters orbit around Bennu, it will descend close to the surface and deploy a 3.35-metre-long arm equipped with a suction-cup-like device. When the arm makes contact, it will release a jet of nitrogen gas to loosen surface rocks and dust, and push at least 60 grams of material into a storage chamber. A NASA engineer developed the idea using an air compressor and a plastic cup, says Rich Kuhns, the mission’s programme manager.

If all goes well, OSIRIS-REx will return to Earth in 2023 with the largest haul of space rocks since NASA’s Apollo programme ended in the 1970s. (Japan’s Hayabusa-2 spacecraft is on its way to sample the asteroid Ryugu, but mission scientists plan to collect less than a gram of material.) NASA scientists will analyse the OSIRIS-REx sample to determine Bennu’s chemical composition. They hope to find water ice and organic molecules such as amino acids — both precursors to life.

Rocks from Bennu could help scientists to understand how the Solar System's planets formed.

“OSIRIS-REx is really a trailblazer,” says Dante Lauretta, the mission’s principal investigator and a planetary scientist at the University of Arizona in Tucson. “Any team that’s planning on intimately interacting with an asteroid, whether they’re mining it or for future exploration, they’re going to take advantage of all the pioneering techniques we’re developing.”

Lauretta should know: he is a science adviser to Planetary Resources, which has identified several near-Earth asteroids that could be rich in water or precious metals. Another company, Deep Space Industries in Mountain View, California, said on 9 August that it is planning a commercial asteroid-mining mission called Prospector-1.

Such companies might eventually extract scarce, valuable platinum-group metals and bring them back to Earth to produce electronic devices and catalytic converters. Asteroids' minerals could also be turned into fuel for deep-space missions, and their metals could be used to print 3D structures in space. Water from asteroids could be used in shields to protect spacecraft from cosmic rays and solar radiation.

Ultimately, the commercial goals of private firms are likely to diverge from the scientific ones of space agencies. “Our agenda is really very different,” says John Lewis, chief scientist for Deep Space Industries. “Our purpose is to find economically attractive resources on asteroids and to devise means to extract them, process them and market them.”

Yet commercial asteroid missions could face legal challenges that do not affect scientific exploration. A 1967 United Nations treaty declares outer space, “including the moon and other celestial bodies”, to be off-limits to sovereign claims. In practical terms, that means that “no country can own property on the Moon” or on asteroids, says lawyer Michael Listner, founder of Space Law and Policy Solutions, a think-tank in East Rochester, New Hampshire.

Others disagree. Last autumn, the United States — a signatory to the UN treaty — enacted a law that permits commercial exploration and recovery of space resources by US citizens. “The US is saying to companies, ‘We’re going to give you permission to go harvest these resources,’” Listner says.

Luxembourg is considering new regulations to permit asteroid mining, and has partnered with companies such as Deep Space Industries and Planetary Resources; other countries could soon follow. There is no international legal framework to address differing interpretations of the UN treaty nor territorial disputes in space, should any develop.

Despite this uncertainty, space agencies and space-mining companies continue to develop plans for the next generation of asteroid exploration. Deep Space Industries' Prospector-1 mission could launch as soon as 2019, while NASA plans to send a robotic spacecraft to an asteroid in the 2020s to retrieve a boulder and drag it into orbit around the Moon.