Organic farming is sometimes touted as a way to feed the world's burgeoning population without destroying the environment. But the evidence for that has been hotly debated.

Now, a comprehensive analysis of the existing science, published in Nature1, suggests that farming without the use of chemical fertilizers and pesticides could supply needs in some circumstances. But yields are lower than in conventional farming, so producing the bulk of the globe’s diet will require agricultural techniques including the use of fertilizers, the study concludes. 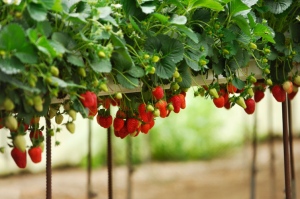 Strawberries are among the few crops that grow almost as well on organic farms as in conventional agriculture.

“I think organic farming does have a role to play because under some conditions it does perform pretty well,” says Verena Seufert, an Earth system scientist at McGill University in Montreal, Canada, and the study’s lead author. But “overall, organic yields are significantly lower than conventional yields”, she says.

Seufert's meta-analysis reviewed 66 studies comparing the yields of 34 different crop species in organic and conventional farming systems. The researchers included only studies that assessed the total land area used, allowing them to compare crop yields per unit area. Many previous studies that have showed large yields for organic farming ignore the size of the area planted — which is often bigger than in conventional farming.

Crop yields from organic farming are as much as 34% lower than those from comparable conventional farming practices, the analysis finds. Organic agriculture performs particularly poorly for vegetables and some cereal crops such as wheat, which make up the lion’s share of the food consumed around the world.

Cereals and vegetables need lots of nitrogen to grow, suggesting that the yield differences are in large part attributable to nitrogen deficiencies in organic systems, says Seufert.

In conventional agricultural systems, farmers apply chemical fertilizers to fields while the crops are growing, delivering key nutrients such as nitrogen when the crops need it most. Organic approaches, such as laying crop residue on the soil surface, build up nutrients over a longer period of time. “There is not the synchrony between supply of nutrients and crop demand,” says Andrew MacDonald, a soil scientist at Rothamsted Research, an agricultural-science institute in Harpenden, UK.

Organic approaches fare better when producing fruits such as strawberries — which have yields only 3% lower than in conventional farming — and oilseed crops such as soybean, which have 11% lower yields. Organic farmers can boost yields of less-productive crops through land-management practices, such as planting them in rotation with leguminous crops that fix nitrogen into the soil, says Seufert.

“There is still a big yield difference but the study does suggest organic systems have the potential to produce comparable yields, but in a very limited number of crops,” says Sonja Vermeulen, director of research for the climate change and agricultural Copenhagen-based programme led by the Consultative Group on International Agricultural Research .

The present study considered only yield differences; Seufert's next project is to analyse existing research on the environmental impacts of organic and conventional agriculture. She is also planning original field research to assess how the two systems compare in developing countries, where reliable data is lacking.

“This is where yield increases are most needed,” says Seufert.