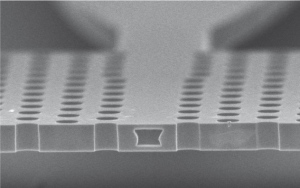 Bits of data travelling the Internet have a tough commute — they bounce back and forth between optical signal lines for efficient transmission and electrical signal lines for processing. All-optical routers would be more energy efficient, but their development has been hindered by a lack of optical memory devices. Now, researchers have developed just such a device, paving the way towards a faster, more energy-efficient Internet.

The devices, described today in the journal Nature Photonics1, are based on optical cavities that can be switched between light-transmitting and light-blocking states to construct digital signals. The researchers at NTT, a telecommunications company based in Kanagawa, Japan, and others have been working on such devices for several years, but previous versions used too much power and could not retain data long enough. The new memory cells use just 30 nanowatts of power, 300 times less than previous designs, and can retain data for more than 10 seconds, much longer than the previous record of about 250 nanoseconds. That’s long enough to support processing, says lead author Masaya Notomi, director of the Photonic Nanostructure Research Group at NTT.

“Our first target is memory in network routers or servers,” says Notomi. At high data rates, optical signals are much more efficient than electrical ones, and the need to convert them back and forth wastes energy. “Later we hope to replace random-access memory in high-speed computers,” he adds.

To make the optical memory, the researchers begin with a thin slab of indium phosphide. In the centre, they bury a strip of another optical material, indium gallium arsenide phosphide. This strip, about four micrometers long and 300 nanometres wide, serves as the memory cell. The  indium phosphide is etched with nanoscale holes, creating a structure that transmits only certain wavelengths of light. A path through the middle of the cell is left unetched, to guide light in and out.

Information is read from or written to the optical memory devices using a laser. When a particular wavelength of light shines on the cell, the material’s refractive index changes so that it either will or will not transmit a pulse of light, to create either a “1” or “0” bit. Another light pulse can reverse it. A second laser provides constant background light, called bias, which helps the memory cell maintain its state.

The NTT researchers went on to integrate four of the memory cells on the same chip. Notomi believes that it will be feasible to combine one million such cells to create a device with a power consumption of 30 milliwatts. By comparison, flash memory uses on average 150 milliwatts. He and his group are now working on adding the lasers and light detectors needed to read and write optical memory to the same chip.

Victor Zhirnov, director of special projects at the Semiconductor Research Corporation, a non-profit research consortium in Durham, North Carolina, doubts whether the optical random-access memory devices will be used in future computer processors. Electronic memory cells are much more compact than optical ones may ever be, and existing technologies such as flash have decades-long data-retention times, he says.

Connie Chang-Hasnain, director of the Center for Optoelectric Nanostructured Semiconductor Technologies at the University of California, Berkeley, says that she is excited about the NTT devices’ relatively long memory-retention time and the demonstration that they can be integrated. Whether caused by cat videos travelling from cell phones to a Facebook data centre or banking information moving from computers to servers, “Internet data congestion is escalating”, she says. “Using optical memory to do some of this data routing will become necessary.”

This article originally stated that the maximum memory time of the optical chip was one microsecond. In fact, it was longer than 10 seconds. The text has been changed to reflect this.