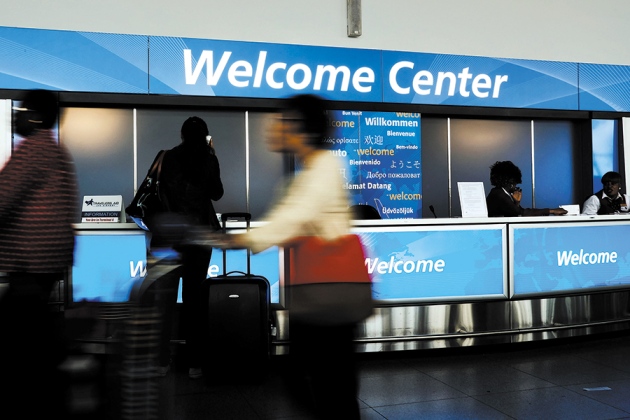 International projects account for at least 20% of national government spending on scientific research. Some countries spend as much as 50% of these funds on international collaborations1, 2. The number of internationally co-authored papers is growing rapidly2. For countries at the forefront of research, the fraction of papers that are entirely 'home grown' is falling3.

Is there a connection? We analysed publication and citation data for 36 nations, along with government expenditures on science. We found that although government spending on research and development (R&D) does correlate with the number of publications produced, it does not correlate with scientific impact — at least as assessed by citations, one of the few practical metrics available. What does correlate with impact is a country's openness, which we approximated by combining metrics of international co-authorship and the mobility of each nation's research workforce.

In 2016, we partnered with Jeroen Baas, head data scientist at Elsevier, the publication house that also runs the citation database Scopus, to examine nearly 2.5 million publications that were published in 2013 across all scholarly fields and that had three years' worth of citation data available. Publications and a field-weighted citation index were apportioned to countries according to authors' locations. (So if two-thirds of the authors on a publication were in the United Kingdom and one-third in Singapore, those fractions were applied to determine the publication count and citations assigned to those countries for that paper.)

We looked for factors that could explain this. In addition to international collaboration, scientific mobility was expected to contribute to impact4. So we also considered new researchers coming in, returnees and emigrating researchers, all of which are tracked by the Organisation for Economic Co-operation and Development (OECD). These variables, together with collaboration, proved to be highly correlated as measures of international engagement; so we used them to create an index of openness and were able to assign values to 33 of the countries that we looked at (data available at go.nature.com/2fzrnt3).

To assess whether government R&D spending (as tracked by the OECD and Eurostat, the statistical office of the European Union) and our openness measure explained the relatively higher impact for smaller countries, we used a Pearson correlation analysis, which allows comparisons to be made across a large quantitative range, such as the publication output of the United States versus that of Singapore.

Public R&D funding is tied to publication output: the more money spent, the more articles produced (counting sole-authored, co-authored and internationally co-authored). But we found only a weak correlation between spending and impact. In other words, more government funds spent does not necessarily result in more citations. 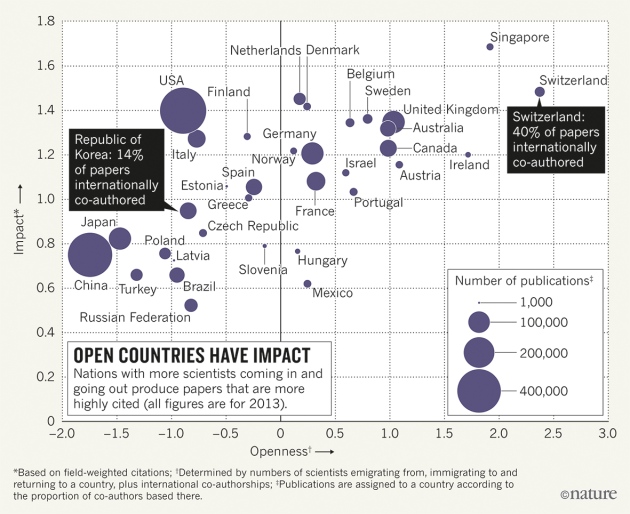 Countries that are highly 'open' and that produce high-impact research seem to benefit from participating in international collaboration. This is seen in the higher impact of smaller nations, which cluster in the top-right quadrant of the graphic (see 'Open countries have impact'). Singapore, the United Kingdom, the Netherlands, Switzerland, Sweden and Denmark all scored highly on this measure as well as on citations. The correlation between openness and citation impact was tight (r2 = 0.7 according to a regression analysis) regardless of R&D spending or numbers of articles published.

Countries with low openness and low impact include Russia, Turkey and Poland, China, Japan, Latvia, Lithuania, the Czech Republic and, against expectations, South Korea (which spends a higher percentage of its GDP on R&D than almost every country, including the United States) These countries are shown in the lower-left quadrant.

The United States scores highly on impact, but less so on openness — perhaps because of the magnitude of its scientific enterprise and its geographic distance from possible collaborators. Of our 33 countries, only 4 (the United States, Italy, Spain and Finland) have low openness and high impact, and only 2 (Hungary and Mexico) have high openness and low impact.

Our analysis suggests that openness is related to impact, although we recognize that correlation is not causation. Nevertheless, we note that many of the countries whose scholarship has high impact, and whose policies encourage international engagement, are from Europe. The EU has established the European Research Area (ERA). Its governments have been implementing measures to strengthen domestic research systems while also promoting both international collaboration and mobility. The EU's Framework programmes have similar aims — one of the current stated objectives of EU research policy is to be more “open to the world”.

Analysis of citation strength for countries in Europe shows that they have greatly enhanced their impact compared with the United States (see 'Open impact'). As a bloc, the EU now outperforms the United States. Both far exceed China in impact, although China's share of high-impact papers is growing rapidly5. Other countries that promote openness also perform well in terms of impact: examples include Singapore and Australia. 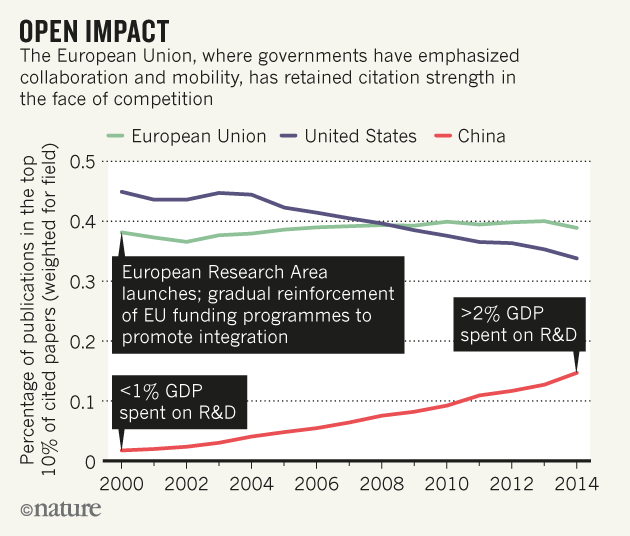 Some will argue that citation is not synonymous with quality or importance, but it does signal engagement and recognition. Studies dating as far back as 1992 show that international papers are, on average, more highly cited6. The countries that are engaging internationally are seeing a dividend in terms of attention to their research.

It may be that the exchange of ideas encourages greater creativity, or that a virtuous cycle of quality work attracts others to work with those in higher-impact countries. In fact, we had very similar results when we considered each component in our openness metric separately, although most of the effect of the mobility variables is mediated by international collaboration. Analytically, it makes sense to combine these into a single variable. However, other factors — such as the ease of obtaining visas or support to study in a country — are not explicitly incorporated.

In Japan, especially, output and citation impacts have remained flat since 2000. Japan is also among the least internationalized of leading nations, and this could be dragging on its performance. Lack of professional mobility, as well as language barriers, may be hindering engagement.

Our analysis suggests that national funding programmes should, whenever possible, move away from policies that fund only national researchers. In the longer term, countries could benefit more by funding the best science, wherever it is, and ensuring that domestically based scientists are linked with it. Restricting the movement of researchers — by limiting exchange opportunities or imposing visa restrictions, for example — could be counterproductive.

Just as industries make 'build or buy' decisions, so governments must make 'link or sink' decisions about research investment. Our data add to a growing body of work about the changing science system, indicating that science policymakers who seek to enhance impact should prioritize international exchange.

In data used for the graph ‘Open countries have impact’, some articles classified into more than one field were counted twice. The graph has been updated to show disaggregated counts. The categorization of countries has not changed.