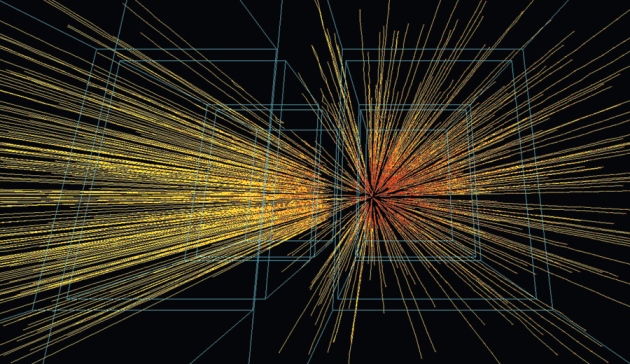 Freeview: experimental results from high-energy physics, such as this fireball of quarks and gluons, should soon be published in open-access papers.

The entire field of particle physics is set to switch to open-access publishing, a milestone in the push to make research results freely available to readers.

Particle physics is already a paragon of openness, with most papers posted on the preprint server arXiv. But peer-reviewed versions are still published in subscription journals, and publishers and research consortia at facilities such as the Large Hadron Collider (LHC) have previously had to strike piecemeal deals to free up a few hundred articles.

After six years of negotiation, the Sponsoring Consortium for Open Access Publishing in Particle Physics (SCOAP3) is now close to ensuring that nearly all particle-physics articles — about 7,000 publications last year — are made immediately free on journal websites. Upfront payments from libraries will fund the access.

So that individual research groups do not need to arrange open publication of their work, the consortium has negotiated contracts with 12 journals (see ‘Particles on tap’) that would make 90% of high-energy-physics papers published from 2014 onwards free to read, says Salvatore Mele, who leads the project from CERN, Europe’s high-energy physics laboratory near Geneva, Switzerland, and home of the LHC. According to details announced on 21 September, six of the journals will switch their business models entirely from subscription to open access. It is “the most systematic attempt to convert all the journals in a given field to open access”, says Peter Suber, a philosopher at Earlham College in Richmond, Indiana, and a proponent of open access.

The consortium invited journals to bid for three-year open-access publishing contracts, and ranked them by an undisclosed algorithm that weighed their fees against their impact factors and the licences and delivery formats they offer. Under the deal, the journals will receive an average of €1,200 (US$1,550) per paper. Physical Review D, the journal that publishes most papers in the field, negotiated a fee of US$1,900 per article “on the principle that we should maintain our revenue”, says Joe Serene, treasurer and publisher at the American Physical Society, which owns the journal. But the society’s prestigious Physical Review Letters missed out because its bid was too high, says Serene (the journal currently charges authors $2,700 for individual open-access articles). CERN and SCOAP3 will continue to negotiate individual open-access agreements with journals not included in the deal, and more could join when the contract is renegotiated in 2016.

Mele says that the goal of SCOAP3 is to switch the discipline’s journals to open access without researchers noticing any effect on their grant funding or on the way they publish papers. The consortium will pay the contracts from an annual budget of €10 million, which is funded not by authors or research grants, but by pledges from more than a thousand libraries, funding agencies and research consortia across the world. In effect, existing journal subscription fees are being repurposed to provide the open-access funds.

“It is the most systematic attempt to convert all the journals in a given field to open access.”

Before any contracts can be signed, however, publishers must reduce the price of their subscription packages to offset the income from SCOAP3 — a complex calculation to ensure that libraries don’t pay twice for the same content. Then SCOAP3 must collect its pledges — not a foregone conclusion, as some libraries may be tempted to renege, figuring that their institution won’t lose access to the free papers anyway.

Mele hopes that success could trigger a domino effect in fields such as astronomy and astrophysics. “I personally believe that once this is demonstrated to work, some variations, fine-tuning and adaptation of the idea will emerge,” he says.

But Serene and others caution that SCOAP3 may be hard to replicate. It has unique advantages in that most high-energy-physics papers are published in just a few journals, and that the field can be driven and coordinated by one central organization, CERN.

Suber notes the stark contrast between the quiet brokering of SCOAP3 and the battles playing out over mandates for open-access publication by research funders such as foundations and government agencies (see Nature 486, 302–303; 2012). “I call it the peaceful revolution,” he says.