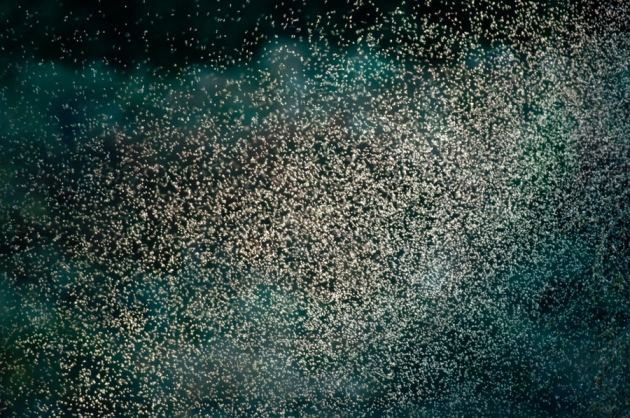 Midge swarms, such as this huge one photographed in South Africa, display 'emergent' behaviour in which they appear to have a common mind. But this can occur even with small numbers of insects.

To most people, a cloud of midges is an annoyance. To Nicholas Ouellette it is the key to a mysterious animal behaviour — the swarm.

Ouellette, who works on complex systems at Yale University in New Haven, Connecticut, and his colleague James Puckett, have found that swarms of these insects become self-organizing when their numbers reach just ten individuals.

Their paper, published on 13 August in Journal of the Royal Society Interface1, is part of a small but growing area of research producing data from real swarms to inform models of this behaviour.

Ouellette and Puckett set up laboratory colonies of Chironomus riparius midges, which live for only a few days after reaching adulthood and tend to fly only at dawn or dusk.

“A lot of people will say a swarm is just a whole bunch of insects,” says Ouellette. “I would like to say a swarm is somehow collective and self-organizing.”

The researchers used high-speed cameras to film the midges’ aerial activity and a computer program to reconstruct the flight paths of individual insects and to see when such collective behaviour emerged.

Midge swarms do not show the choreographed movement of fish schools or bird flocks, but their members remain in just a small portion of the space available to them. There is, says Ouellette, “a very clear boundary that separates where the swarm is from where the rest of the world is”.

From analysing the movements and locations of midges in 344 swarmings, the researchers determined that once a group of midges reached ten individuals, the statistics they were measuring — such as volume of space per individual midge and average distance between insects — became constant, marking the point that the individuals started behaving collectively.

“You don’t need a ton of individuals to see swarming. Once you get to about ten individuals the statistics don’t tend to change any more,” says Ouellette.

This creates a challenge for mathematicians who wish to create general models of swarming behaviour. To be accurate, these models must be able to simulate animal aggregations without requiring a huge number of individuals.

Leah Edelstein-Keshet, a mathematician who studies swarming at the University of British Columbia in Vancouver, Canada, says that the paper is “a very nice contribution to the field” and that the researchers are “pioneers, carefully tracking individuals flying in a three-dimensional swarm and sensibly using the data to examine how swarm size affects the collective behaviour”.

“We need more such specific examples with careful tracking of individuals,” she told Nature in an e-mail. “The agreement [between models and reality] is getting better all the time, because nowadays, folks are using the data to infer the behaviour, not trying to retro-fit the data to old models.”