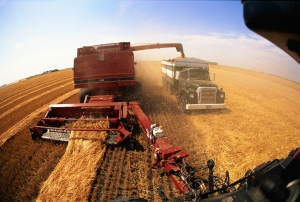 Agricultural production is the main emitter of carbon dioxide in the global food system.

The global food system, from fertilizer manufacture to food storage and packaging, is responsible for up to one-third of all human-caused greenhouse-gas emissions, according to the latest figures from the Consultative Group on International Agricultural Research (CGIAR), a partnership of 15 research centres around the world.

In two reports published today1, 2, the CGIAR says that reducing agriculture’s carbon footprint is central to limiting climate change. And to help to ensure food security, farmers across the globe will probably have to switch to cultivating more climate-hardy crops and farming practices.

“The food-related emissions and the impacts of climate change on agriculture and the food system will profoundly alter the way we grow and produce food,” says Sonja Vermeulen, a plant scientist at the University of Copenhagen in Denmark and a co-author of one of the studies, which estimates the emissions footprint of food1.

Vermeulen and her colleagues examined for the first time the carbon emissions for all stages of the global food system. Previous work has only looked at the contribution of agricultural production to greenhouse-gas emissions, including the release of nitrous oxide from soils from farming techniques such as tilling.

Using estimates from 2005, 2007 and 2008, the researchers found that agricultural production provides the lion’s share of greenhouse-gas emissions from the food system, releasing up to 12,000 megatonnes of carbon dioxide equivalent a year — up to 86% of all food-related anthropogenic greenhouse-gas emissions. Next is fertilizer manufacture, which releases up to 575 megatonnes, followed by refrigeration, which emits 490 megatonnes. The researchers found that the whole food system released 9,800–16,900 megatonnes of carbon dioxide equivalent into the atmosphere in 2008, including indirect emissions from deforestation and land-use changes.

“This is the first time this has been done. It’s a brave paper, considering the huge data limitations — this is why there is such a big range,” said Bruce Campbell, an ecologist and director of the CGIAR research programme on climate change, agriculture and food security.

In high-income countries such as the United Kingdom, post-production — including storage and transport — contributes a large proportion of the food system’s greenhouse-gas emissions, whereas in China, for example, fertilizer manufacture has the biggest role, the researchers found.

Increasing temperatures and the likelihood of flooding will challenge farmers’ ability to safely store and distribute food, boosting the risk of food-borne illnesses and diarrhoeal diseases, they add.

“Food safety will in future be a crucial issue. This is a different take from the usual focus on crop yields and emissions,” says Campbell.

In the second report2, Philip Thornton, an agricultural scientist at the International Livestock Research Institute,headquartered in Nairobi, Kenya, examined the potential effects of climate change on 22 of the world’s most important agricultural commodities, including wheat, soya beans and potatoes.

By 2050, climate change could cause irrigated wheat yields in developing countries to drop by 13%, and irrigated rice could fall by 15%. In Africa, maize yields could drop by 10–20% over the same time frame.

For some crops, improvements to heat resistance through conventional and transgenic breeding, for example, will help farmers to adapt. But for others, more radical changes are needed. Thornton says that potato-growing areas, including China and India, are likely to see yields drop significantly as temperatures rise, and he suggests that farmers consider growing crops, such as bananas, that do better in warmer climates.

Campbell says that the CGIAR will use the paper to help set its research agenda for the next decade and “identify which crops and which regions to focus investment on”.

He calls on governments meeting next month at the climate-change conference in Doha, Qatar, to agree on a way forward to tackle the challenges of mitigating and adapting to the effects of climate change on agriculture.