3D reconstruction of the left foot of the ancient primate fossil

The near-complete fossil of a tiny creature unearthed in China in 2002 has bolstered the idea that the anthropoid group of primates — whose modern-day members include monkeys, apes and humans — had appeared by at least 55 million years ago. The fossil primate does not belong to that lineage, however: it is thought to be the earliest-discovered ancestor of small tree-dwelling primates called tarsiers, showing that even at this early time, the tarsier and anthropoid groups had split apart. 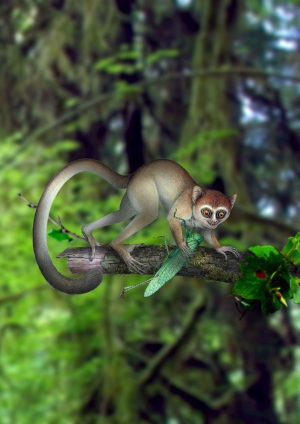 How the ancient primate might have looked, in its natural habitat of trees (artistic reconstruction).

The slender-limbed, long-tailed primate, described today in Nature1, was about the size of today’s pygmy mouse lemur and would have weighed between 20 and 30 grams, the researchers estimate. The mammal sports an odd blend of features, with its skull, teeth and limb bones having proportions resembling those of tarsiers, but its heel and foot bones more like anthropoids. “This mosaic of features hasn’t been seen before in any living or fossil primate,” says study author Christopher Beard, a palaeontologist at the Carnegie Museum of Natural History in Pittsburgh, Pennsylvania.

By analysing almost 1,200 morphological aspects of the fossil and comparing them to those of 156 other extant and extinct mammals, the team put the ancient primate near the base of the tarsier family tree. The creature is dubbed Archicebus achilles, in which the genus name Archicebus roughly translates as 'original long-tailed monkey', while the species name achilles is a wry nod to the primate's anthropoid-like heel bone.

The number of anatomical characteristics scrutinized by Beard and his colleagues is much higher than is typically covered by a single study, largely thanks to high-resolution scans of the well-preserved fossil and the team’s detailed, decade-long analysis. “This is really fantastic, impressive work,” says Zhe-Xi Luo, a vertebrate palaeontologist at the University of Chicago in Illinois. “Every detail that can be extracted from these fossils has been extracted.”

The primate's remains were recovered from a layer of shale formed from sediments deposited in a lake in what is now eastern China between 54.8 million and 55.8 million years ago, says paper co-author Xijun Ni, a palaeontologist at the Institute of Vertebrate Paleontology and Paleoanthropology in Beijing. Fragmentary fossils of primates had already been unearthed from around this era, says Beard, but those usually consisted of just teeth and bits of jawbones; the oldest well-preserved primate skeletons until the new find came from around 48 million years ago. 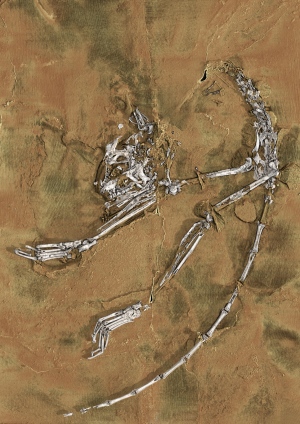 Reconstruction of the fossil of Archicebus achilles, based on microtomography scanning.

Because the fossil indicates that the tarsier and anthropoid primate groups split before that era, the anthropoid lineage is also at least that old, says Beard. He says that he and others had suggested a tarsier/anthropoid split of about this time previously, but based on thinner evidence.

Its long hindlimbs and grasping feet suggest that A. achilles lived in trees, with a tail thought to be at least twice its body length helping it to maintain balance as it leapt from branch to branch. The moderate size of the primate’s eye sockets hint that it was active in the day.

The size and shape of the primate's teeth — particularly the sharply pointed premolars, which were well adapted for shearing prey — strongly suggest that the tiny mammal fed mostly on insects. Such prey would have been abundant, because A. achilles evolved during an era when global temperatures were exceptionally high and jungles stretched as far north as the Arctic. “It was a great time to be a primate,” says Beard.

Because A. achilles sits near the base of the tarsier family tree, scientists say it probably resembles the yet-to-be-discovered creatures that lie at the base of most primate groups — including the anthropoid lineage that ultimately gave rise to humans. “If you retrace primate evolution to its beginning, [A. achilles] is what our ancestors most likely looked like,” says Luo.