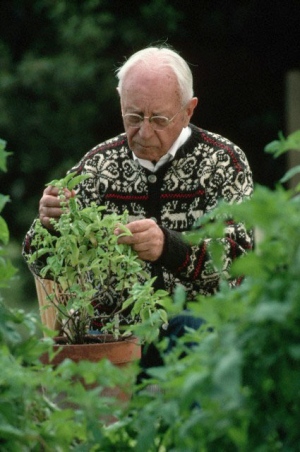 Wait a minute. There's something unusual about the subway seat you just claimed. It's awfully warm, and a peculiar odor seems to hover in the air nearby—a stale, musty odor tinged with something as acrid as mothballs. You know this aroma: it's "old person smell."

Anecdotally, the unique scent of the elderly lingers wherever they live and in any confined spaces they have recently occupied, such as taxis and elevators. Many different cultures have recognized the phenomenon—the Japanese even have a word for it, kareishuu—but the biological truth of old person smell remains uncertain. In a new study, blindfolded volunteers reliably recognized the aroma of the elderly by sniffing sweat-soaked armpit pads, although they had a much harder time correctly matching pads to the young and middle-aged, and they were not able to make fine distinctions about age based on scent alone. Contrary to the popular notion that old person smell is disagreeable, volunteers in the new study rated the odors of the elderly as much less unpleasant and intense than those of the middle-aged and young. Combined with earlier research, the new findings suggest that people retain a latent ability to gauge someone's age based on their odor, a talent inherited from evolutionary ancestors that might be linked to the ways animals recognize the sick and dying.

Researchers have shown that the body odors of some animals—including mice, black-tailed deer, otters, owls and rabbits—change with age and that animals can distinguish their young and old peers by smell. In other studies, investigators discovered that people, too, can tell the difference between old and young otters and rabbits by using scent cues.

Human body odor also changes with age, depending largely on the activity of various skin glands and how the substances they release interact with bacteria. The sebaceous glands, which secrete a waxy substance called sebum to lubricate and waterproof the skin, are particularly active during puberty and throughout most of adulthood. Likewise, apocrine sweat glands—which are only located in a few places, such as the armpits and genital region—rev up during puberty. Eccrine sweat glands, found all over the human body, exude a clear, odorless, salty liquid throughout life. All these fluids begin to stink when bacteria break down the various chemicals they contain—especially steroids and lipids—into smaller, odorous molecules that easily waft into the air. The more sweat on the skin, the more chemicals for the bacteria to break down, and the stronger the body odor.

Johan Lundström of the Monell Chemical Senses Center studies human and animal body odors and how the brain responds to smells. Every now and then, he gives scientific talks at an elderly care center in the greater Philadelphia area that—he realized one day—smells almost exactly like the nursing home his mother managed in Sweden when he was young. Perhaps the smell really did emanate from the residents. Knowing about earlier research on animal body odors and age, Lundström decided to test whether smell also informs how people evaluate age.

In their new study, Lundström and his colleagues sewed absorbent nursing pads into the armpits of T-shirts and asked volunteers of different ages to sleep in the shirts for five consecutive nights. The researchers divided the 44 volunteers into three groups: eight women and eight men between the ages of 20 and 30 (the young); the same number of men and women between 45 and 55 (middle-aged); and six women and six men between 75 and 95 (elderly). During the day, the volunteers stored the T-shirts in sealed plastic bags; avoided spicy foods, cigarettes and alcohol; and showered with odorless shampoo and soap.

After the fifth night, Lundström and his team collected and carefully quartered the sweaty nursing pads, placing four segments from each age group in different glass jars in preparation for a smell test. A different group of 41 young men and women volunteered their noses, taking a big whiff of the air at the top of a jar while blindfolded and rating both the intensity and pleasantness of the odor. Sometimes volunteers had to choose which of two odors most likely came from the older volunteer. Other times the volunteers had to label different jars "young," "middle-age" or "old-age."

Contrary to common complaints about "old people smell," the volunteers' blind ratings revealed that they found elderly people's odors both less intense and less unpleasant than odors from young and middle-aged people. Middle-aged man musk took top prize for intensity and unpleasantness, whereas volunteers rated the odors of middle-aged women most pleasant and whiffs of old man as least intense.

Not only did volunteers in Lundström's new study rate the scent of the elderly as less offensive than any other, they also had the easiest time singling out old person smell from a selection of odors. When the volunteers compared two jars containing pads from different age groups, they reliably recognized that the odors were different, but they were not particularly adept at deciding which scent came from the older person. When volunteers attempted to label several different jars by age group, they also often failed to correctly identify odors from the young and middle-aged—but they were much more successful at picking out the jars containing pads soaked in elderly sweat. Old people smell was often instantly recognizable. The findings appear May 30 in PLoS ONE.

Together, the evidence indicates that people recognize a characteristic "old people smell" not because of the aroma's intensity or offensiveness, but because of its uniqueness compared to the body odors of younger people. "I think it's true that old people smell a certain way," Lundström says, "but the idea that the smell is negative may largely be social stigma." An earlier study found that, compared with people aged 25 to 40, people over age 40 have higher levels of a fragrant organic compound known as 2-nonenal in their sweat and on their skin. The chemical, which the researchers described as having an "unpleasant grassy and greasy odor," might be "a major cause of the deterioration in body odor that has been observed with aging"—in other words, the biological explanation for why older people have a characteristic odor. But the compound has also been linked to the scent of cucumbers and aged beer, which are not distasteful to most people; others have compared old people smell to old book smell, which most people find benign at worst and enjoyable at best.

Compared with many other animals, humans have a lousy sense of smell. Determining exactly how people change their behavior based on one another's scents—or possibly pheromones—has frustrated and challenged scientists. Still, some evidence suggests that subtle chemical communication, much of it subconscious, helps people recognize family, changes women's reproductive cycles and makes it easier to empathize with others. As for the advantage of recognizing age by odor, "It might be a way to distinguish the sick from the healthy—not overt sickness, but underlying cell decay," Lundström says. "The older we get, the more natural decay we have. But no one really knows why animals or people have this ability."