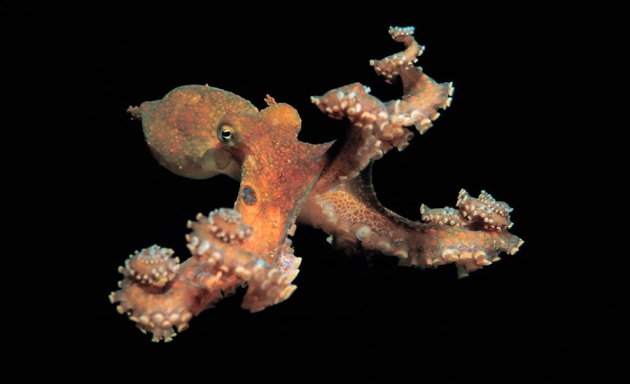 The octopus genome offers clues to how the creatures evolved intelligence to rival the craftiest vertebrates.

With its eight prehensile arms lined with suckers, camera-like eyes, elaborate repertoire of camouflage tricks and spooky intelligence, the octopus is like no other creature on Earth.

Added to those distinctions is an unusually large genome, described in Nature1 on 12 August, that helps to explain how a mere mollusc evolved into an otherworldly being.

“It’s the first sequenced genome from something like an alien,” jokes neurobiologist Clifton Ragsdale of the University of Chicago in Illinois, who co-led the genetic analysis of the California two-spot octopus (Octopus bimaculoides).

“It’s important for us to know the genome, because it gives us insights into how the sophisticated cognitive skills of octopuses evolved,” says neurobiologist Benny Hochner at the Hebrew University of Jerusalem in Israel, who has studied octopus neurophysiology for 20 years. Researchers want to understand how the cephalopods, a class of free-floating molluscs, produced a creature that is clever enough to navigate highly complex mazes and open jars filled with tasty crabs.

Surprisingly, the octopus genome turned out to be almost as large as a human’s and to contain a greater number of protein-coding genes — some 33,000, compared with fewer than 25,000 in Homo sapiens.

This excess results mostly from the expansion of a few specific gene families, Ragsdale says. One of the most remarkable gene groups is the protocadherins, which regulate the development of neurons and the short-range interactions between them. The octopus has 168 of these genes — more than twice as many as mammals. This resonates with the creature’s unusually large brain and the organ’s even-stranger anatomy. Of the octopus's half a billion neurons — six times the number in a mouse — two-thirds spill out from its head through its arms, without the involvement of long-range fibres such as those in vertebrate spinal cords. The independent computing power of the arms, which can execute cognitive tasks even when dismembered, have made octopuses an object of study for neurobiologists such as Hochner and for roboticists who are collaborating on the development of soft, flexible robots.

A gene family that is involved in development, the zinc-finger transcription factors, is also highly expanded in octopuses. At around 1,800 genes, it is the second-largest gene family to be discovered in an animal, after the elephant’s 2,000 olfactory-receptor genes. 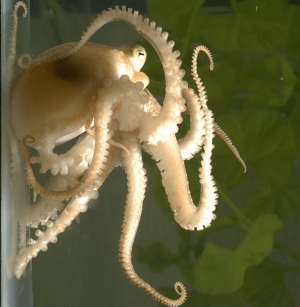 The analysis also turned up hundreds of other genes that are specific to the octopus and highly expressed in particular tissues. The suckers, for example, express a curious set of genes that are similar to those that encode receptors for the neurotransmitter acetylcholine. The genes seem to enable the octopus’s remarkable ability to taste with its suckers.

Scientists identified six genes for proteins called reflectins, which are expressed in an octopus's skin. These alter the way light reflects from the octopus, giving the appearance of a different colour — one of several ways that an octopus can disguise itself, along with changing its texture, pattern or brightness.

Another discovery hinted at the basis of an octopus’s intelligence. The genome contains systems that can allow tissues to rapidly modify proteins to change their function. Electrophysiologists had predicted that this could explain how octopuses adapt their neural-network properties to enable such extraordinary learning and memory capabilities.

The octopus’s position in the Mollusca phylum illustrates evolution at its most spectacular, Hochner says. “Very simple molluscs like the clam — they just sit in the mud, filtering food. And then we have the magnificent octopus, which left its shell and developed the most-elaborate behaviours in water.” 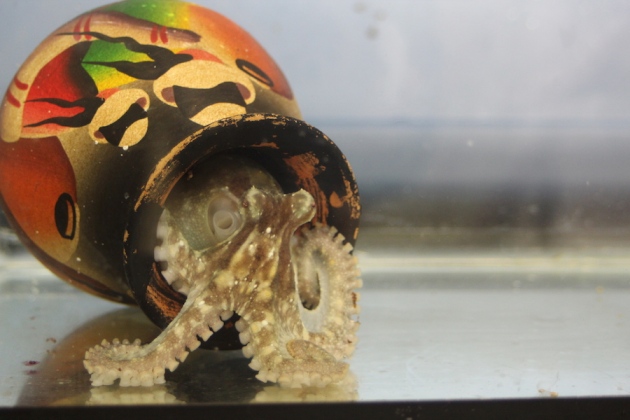 A young Octopus bimaculoides peers out of her den.