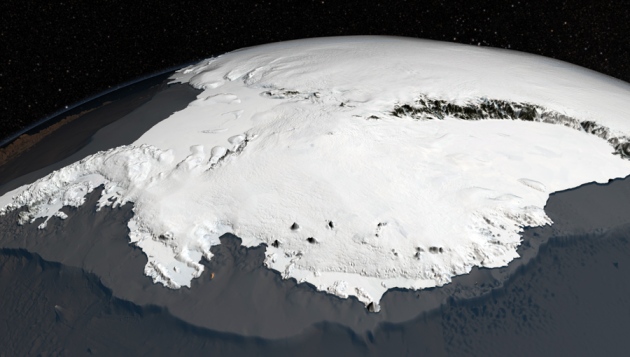 The Antarctic ice sheet (shown here in a three-dimensional NASA image that exaggerates the vertical scale) is losing more ice from oceanic currents eating at it from below than from large blocks of ice breaking off it.

They may be less dramatic than the events in which icebergs break off, but everyday interactions with warm ocean currents could cause more than half of the ice melt along Antarctica’s coastline.

Ice shelves are portions of the larger ice sheet that extend over the ocean, floating on seawater. Conventional wisdom once held that calving, the break off of large chunks of ice, was the main factor driving ice-shelf dynamics, but recent research has underscored the role of melting from below, or 'basal' melting. Capitalizing on newly available monitoring data as well as recent modelling, a team of scientists led by Eric Rignot at the University of California, Irvine, has for the first time quantified this effect for the entire continent.

The results, which appear in Science1, suggest that warm ocean currents are melting ice shelves predominantly at certain locations around the continent, to an extent that accounts for 55% of the annual meltwater. The findings will help scientists to tackle larger questions about how the Antarctic ice sheet might change in future and its contribution to global sea-level rise.

Rignot suggests that the ice shelves act like stoppers, stemming the slow flow of continental ice. “If they thin and disappear, then the continental ice will accelerate its movement to the sea,” he says.

The findings build on a paper published last year in Nature2 suggesting that wind-driven ocean currents are a primary factor in the thinning ice shelves. But Rignot and his colleagues are the first to incorporate a host of recent data into their measurements, including ongoing aerial surveys and a comprehensive analysis of previous data from satellites and other sources.

“This was quite a big gap in our understanding of how the ice sheets interact with their surroundings, and what it shows is that the oceans play a bigger role than we’d previously thought,” says Hamish Pritchard, a glaciologist at the British Antarctic Survey in Cambridge who led the Nature study. Other teams are working on similar analyses, Pritchard says, but “Eric won the race”. 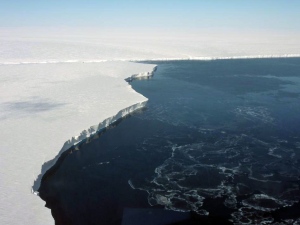 Despite being relatively small, Antarctica's Getz Ice Shelf produces more meltwater than ice shelves around the continent that are ten times its size.

Rignot’s analysis suggests that roughly half of the meltwater comes from ten small ice shelves along the southeastern part of the Antarctic Peninsula and West Antarctica, such as the Getz Ice Shelf (see picture at left); the analysis also identifies significant melting at six ice shelves in East Antarctica. The three largest ice shelves, which account for two-thirds of the ice shelf area around Antarctica, are responsible for just 15% of the total basal melting.

But although these latest data highlight the overall ice-shelf dynamics, they do not necessarily imply that the continent's cumulative ice loss is greater than previously thought: Nearly half of the ice shelves are thinning, but others are thickening or in a state of equilibrium. Nonetheless, the authors argue, the results do point towards ocean–ice interactions that are not being captured in current computer models.

Frank Pattyn, an ice-sheet modeller at the Free University of Brussels, says that knowing the basal melting rates will help to refine the models, but that the key is understanding how those rates change over time as the seafloor topography and ocean circulation evolve. “This is much more difficult to monitor,” Pattyn says, but is “essential” if scientists are to make accurate predictions of how the ice sheet will change.

Rignot questions whether today’s models are up to the task of projecting long-term ice-sheet evolution, but he says that scientists are slowly building a record of observations that can help pin down the processes involved and ultimately improve the equations that are used. “We are getting there,” he says, “but it will take some time.”