Pharmaceutical giant Novartis goes to the Indian Supreme Court next week, aiming to weaken the country’s drug-patent law by challenging a clause that prevents ‘evergreening’, a practice in which pharma companies continuously extend the life of a patent by tweaking the drug slightly.

Evergreening keeps drugs out of the reach of generic manufacturers, and therefore, say critics, out of the hands of patients who cannot afford some brand-name drugs. Novartis is also seeking a 20-year patent on a new version of its 11-year-old anticancer drug imatinib mesylate (Gleevec), which costs roughly US$30 for one 100-milligram pill. A generic version of the drug sells for as low as one-tenth of that cost. 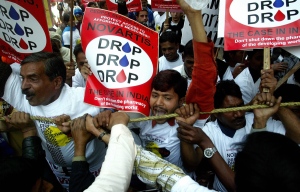 Novartis' attempts to change India's patent laws have met with protests in the country.

A win for Novartis would “have a chilling effect” production of generic drugs in India, affecting “all other essential and life-saving drugs, including those for AIDS and TB treatment,” says Leena Menghaney, an activist at the non-governmental organization (NGO) Médecins Sans Frontières (also called Doctors Without Borders), India, who is leading a public awareness campaign against the Novartis case.

When India signed up in 2005 to the World Trade Organization's agreement on trade-related aspects of intellectual property rights (TRIPS), designed to ensure patent protection, the country included a clause, 3(d), that states that a drug must show a marked difference in efficacy from previous versions to be patentable. “Whereas US patent offices often grant frivolous patents on routine pharmaceutical improvements to a drug, India's law is more stringent,” says Menghaney.

In 2006, the Chennai patent board ruled that Novartis’s variation of Gleevec was not novel enough to be patentable, and in 2007, the Chennai High Court dismissed Novartis’s challenge that clause 3(d) did not fall in line with the TRIPS agreement. However, in 2009, India’s Intellectual Property Appellate Board overturned the 2006 ruling and deemed the drug to be novel and inventive, but said that because the new version didn’t meet the criterion of enhanced efficacy required by 3(d), it still did not merit a patent.

Now Novartis is challenging 3(d) once more and trying again for a new patent on Gleevec. Anand Grover, co-founder and project director for the Lawyers Collective HIV/AIDS Unit in Mumbai, which is battling Novartis alongside the Indian generic-drug manufacturer Natco, says that Novartis is now arguing that section 3(d) relates to “discoveries” (of things already in existence but not previously found) and so doesn’t apply to its patent application, which is an “invention” (the creation of something new) under the Indian patent law.

“Novartis would like the Supreme Court to adopt a low-threshold standard whereby slight improvements will count as significantly enhanced efficacy,” says Brook Baker, a professor in the Program on Human Rights and the Global Economy at Northeastern University School of Law in Boston, Massachusetts. “If this low-hurdle standard is adopted, companies will be able to evergreen their patents in India much as they do in the United States.”

The pharmacy of the poor

A blow to India’s generic industry would also create a ripple effect throughout the developing world, says Baker. “India is a major exporter of generic medicines to developing countries, including 80% of the medicine now used to treat over 6.6 million people living with HIV/AIDS. India's status as the pharmacy of the poor and of the developing world is actually under attack.”

But Paul Herrling, head of corporate research at Novartis in Basel, Switzerland, insists that the case is “about the rewarding of innovation where markets exist, not about impeding access to medicines for poor patients”. He told Nature: “We think that Gleevec is a fundamental breakthrough in medicine. If 3(d) can be used to prevent the patenting of results of innovative biomedical research, it will certainly be a disincentive for both Indian research-based pharmaceutical companies and for foreign companies wanting to be active in India. This would be to the disadvantage of Indian patients.”

India’s defence of its generics industry remains strong — on 9 March it issued its first ‘compulsory licence’ of a patented drug, allowing local manufacturer Natco to produce a generic version of Bayer's sorafenib tosylate, a drug used against liver and kidney cancers. India’s patent controller decided that the company wasn’t selling the drug at a reasonable price for patients in India.

India is not the first to use this tool. In 2007 Brazil issued a compulsory licence on the AIDS drug efavirenz after failing to negotiate lower drug prices with Merck, the drug’s manufacturer.

Menghaney says that the compulsory licence is a victory for advocates of cheaper drugs. “This ruling puts companies on warning that patents are not granted merely to enable them to enjoy a monopoly; there is a consequence for excessive pricing and refusal to license.”

As India awaits the outcome of the Novartis case, Grover is aware that the stakes are high. “If we get knocked out, it’s game over, because there will be no difference between India’s patent law and that of any other country.”