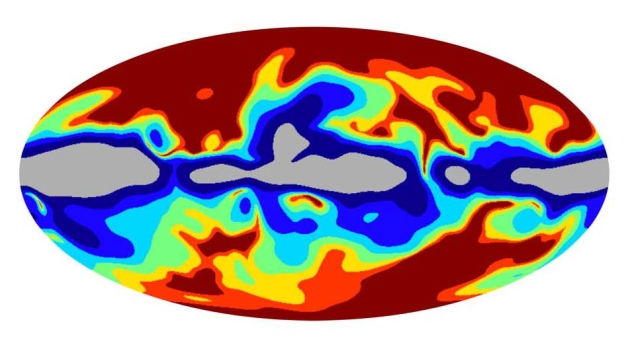 Preliminary data from the Planck probe on how galactic dust scatters microwave radiation, presented at an April 2013 meeting, are now being used to evaluate the strength of signals from the primordial Universe.

The astronomers who this spring announced that they had evidence of primordial gravitational waves jumped the gun because they did not take into proper account a confounding effect of galactic dust, two new analyses suggest. Although further observations may yet find the signal to emerge from the noise, independent experts now say they no longer believe that the original data constituted significant evidence.

Researchers said in March that they had found a faint twisting pattern in the polarization of the cosmic microwave background (CMB), the Big Bang’s afterglow, using a South Pole-based radio telescope called BICEP2. This pattern, they said, was evidence for primordial gravitational waves, ripples in the fabric of space-time generated in the early Universe (see 'Telescope captures view of gravitational waves'). The announcement caused a sensation because it seemed to confirm the theory of cosmic inflation, which holds that the cosmos mushroomed in size during the first fraction of a second after the Big Bang.

However two independent analyses now suggest that those twisting patterns in the CMB polarization could just as easily be accounted for by dust in the Milky Way Galaxy1, 2.

“Based on what we know right now… we have no evidence for or against gravitational waves,” says Uroš Seljak, an astrophysicist at the University of California, Berkeley, a co-author of one of the latest studies1.

But James Bock, a physicist at the California Institute of Technology in Pasadena and a co-leader of the BICEP2 experiment, says that although his group’s main paper “has been revised based on many referee comments and resubmitted” for publication, the evidence for gravitational waves “is certainly not being retracted”.

The critique comes on the heels of a presentation two weeks ago by Raphael Flauger, a theoretical physicist at New York University, who re-examined a map of dust polarization that the BICEP2 team had used in their analysis (see 'Gravitational wave discovery faces scrutiny'). Flauger concluded that the researchers had probably underestimated the fraction of polarization due to dust in the map, which was compiled from data gathered between 2009 and 2013 by the European Space Agency’s Planck spacecraft. Flauger says that when the dust is fully accounted for, the signal that can be attributed to gravitational waves either vanishes or is greatly diminished.

“I had thought that the result was very secure,” Alan Guth, the cosmologist who first proposed the concept of cosmic inflation in 1980, and who is at the Massachusetts Institute of Technology in Cambridge, told Nature after learning about Flauger's talk. “Now the situation has changed.”

That map figured in only one of the six models that the BICEP2 team used to examine the role of dust in their results.

But in a study2 posted on 28 May on the arXiv preprint server, Flauger and his co-authors David Spergel and Colin Hill, both of Princeton University in New Jersey, cast doubt on the remaining models, saying that all are based on a low estimate — between 3.5% and 5% — of the fraction of total polarization caused by galactic dust.

New information, based on more detailed Planck maps released after the BICEP2 team did their analysis, suggest that the fraction is closer to 8–15%, Spergel says. The higher percentage is an extrapolation, he acknowledges, because the newest Planck maps exclude the south polar region of sky that BICEP2 examined (see 'Milky Way map skirts question of gravitational waves').

The difference between 3.5% and 8% may seem small, notes Spergel, but it becomes significant because the signal detected by BICEP2 depends on the square of the polarization fraction, he says.

With those updated numbers, “there’s no evidence for the detection of gravitational waves,” Spergel declares. “It’s consistent with dust.” But a final determination cannot be made until more a precise dust map, expected to be released by the Planck team in October, is available, he adds.

“Dust could account for all or most of the signal” seen by BICEP2, says Paul Steinhardt, a cosmologist at Princeton University, who was not involved with any of the studies.

At the time of press, Bock told Nature he had not had time to read the paper by Flauger, Spergel and Hill, which the authors gave to him and other members of the BICEP2 team only a few hours before it appeared online.

In the second analysis, Seljak and his Berkeley colleague Michael Mortonson took a more conservative approach to scrutinizing the BICEP2 results. With the amount of polarization due to dust in the south polar region as yet unmeasured, Seljak and Mortonson restricted their analysis to a known quantity — the intensity of microwaves emitted by dust over different spatial scales on the sky. In assuming that the intensity of dust varies in the same way over all parts of the sky, including the South Pole, the researchers found no clear evidence that the BICEP2 signal should be attributed to gravitational waves.

Seljak and Mortonson also re-examined data on how the strength of the signal detected by BICEP2 varied with the frequency of the microwaves. The BICEP2 team argued that the intensity of the signal recorded at 150 gigahertz, when compared with data recorded by an older telescope, BICEP1, at 100 gigahertz, did not match the intensity pattern expected from dust. That finding seemed to favour gravitational waves over dust by an 11-to-1 margin.

But Seljak and Mortonson say that the BICEP2 team did not exclude data on small spatial scales in their frequency analysis. That is a problem, Seljak says, because on small scales, gravitational lensing — the bending of light due to massive objects — exactly mimics the twisting polarization pattern that gravitational waves imprint on larger spatial scales.

Accounting for the lensing signal, “the primordial gravity-wave signal is preferred to dust with odds of less than 2 to 1 — in other words, not significant odds at all,” says Seljak.

The BICEP2 team did not respond to several requests for comment on the paper by Seljak and Mortonson.

Seljak says that new data expected soon from the Keck Array, a telescope at the South Pole built by the BICEP2 team, could provide a litmus test for the true nature of the BICEP2 signal.

Bock says that he and his BICEP2 colleagues eagerly await the Planck map this autumn, and already have in hand better 95- and 150-gigahertz data from the Keck Array.