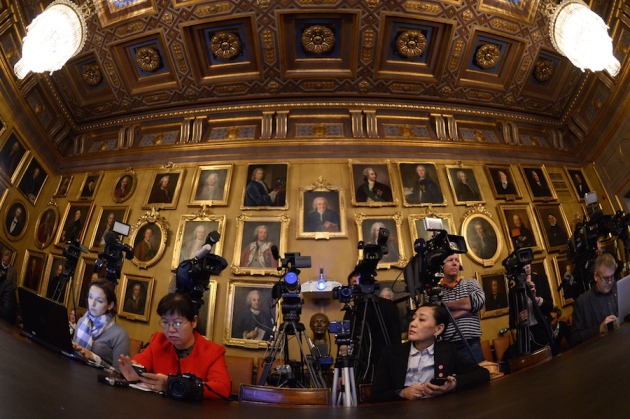 Journalists await the announcement of the 2014 Nobel Prize in Physics.

Nobel prize season is approaching, and scientists and other pundits have begun the annual ritual of speculating — with varying degrees of seriousness — about who will win this year’s awards.

At least one set of forecasters predicts that the prizes for chemistry, physics and physiology or medicine may buck recent trends. The awards will be announced starting on 5 October.

The annual predictions by Thomson Reuters, released this year on 24 September, name more women than ever before: four in total. Among the potential laureates for the chemistry prize are Emmanuelle Charpentier of the Helmholtz Centre for Infection Research in Braunschweig, Germany, and Jennifer Doudna of the University of California, Berkeley, who would share the prize for helping to create the CRISPR/Cas9 gene-editing technique.

The Thomson Reuters forecast — derived from an analysis of the most highly cited papers in each of the Nobel categories — identifies researchers whose work has been particularly influential. “It’s fun,” says David Pendelbury, a citation analyst at the company in Eugene, Oregon. “It's fun to guess.”

If Doudna and Charpentier won, it would be just three years after they published their seminal paper1. That is a small delay compared to the historical average: more than half of chemistry and physics prizes since 1985 have been given for work that is over 20 years old, according to an analysis that appeared in Nature last year2. 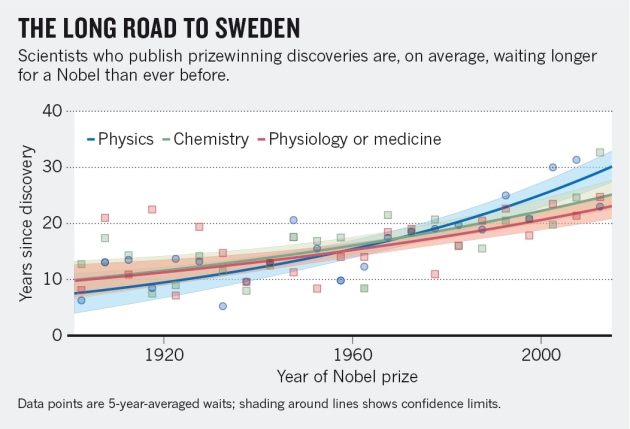 The Thomson Reuters list also includes two picks that would give the physics prize to a single person: Deborah Jin of the University of Colorado Boulder for her research on ultracold fermionic condensates, or Zhong Lin Wang of the Georgia Institute of Technology in Atlanta for his invention of two types of nanogenerator. The physics prize has not gone to an individual since 1992, and a woman has won it only twice.

Since it began in 2002, the Thomson Reuters forecast has picked 37 researchers who have gone on to win, although not necessarily in the year pinpointed by the firm. The forecast has correctly predicted the topic of the award in 21 out of 52 tries. (How well do you know the Nobels? Take our Nobel quiz.)

For soothsayers who are less quantitatively minded, the Internet provides many outlets for prognostication.

The society organized 3 brackets — chemistry, physics and physiology or medicine — that each paired off 16 nominees. Voters decided which half of a pair advanced in a given round. Charpentier and Doudna, who appeared in the chemistry bracket, were the competition’s most popular write-in candidates, Thorstensen says. But after a landslide win in the first round, the two CRISPR inventors were edged out in the second round by Michael Grätzel of the Swiss Federal Institute of Technology in Lausanne; he got the nod for his work on solar cells. Voting for the final round remains open until 27 September.

Sam Lord, a microscopy specialist at the University of California, San Francisco, who began making predictions on his Everyday Scientist blog in 2008, also picked Charpentier and Doudna for the chemistry prize. But later the same day, he doubled back. “I already regret predicting CRISPR,” Lord wrote in a comment on the original post. “Too soon.”

Those interested in parlaying their prophecies into financial gain may have to stick with the Nobel Prize in Literature. One prominent outlet for Nobel betting — British bookmaker Ladbrokes — stopped regularly offering odds on the science prizes more than three years ago.