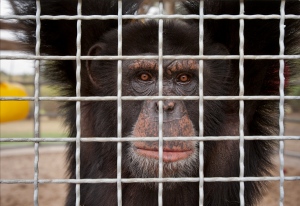 Most research chimpanzees would be retired under new recommendations.

The US National Institutes of Health (NIH) should dismantle a decades-old colony of 360 chimpanzees, retiring all but 50 or so of the animals to a national sanctuary, the agency was told on 22 January in a long-awaited report.

The report, from a working group of external agency advisers, also counsels the NIH to end half of 22 biomedical and behavioural experiments, saying that they do not meet criteria established in a December 2011 Institute of Medicine (IOM) report.

“Clearly there is going to be a reduction in the use of chimpanzees in research,” says working group co-chair Kent Lloyd, associate dean for research at the School of Veterinary Medicine, University of California Davis.

The report says that the NIH should begin planning the transfer of animals due for retirement to sanctuary housing “immediately”, and that a colony of about 50 animals is sufficient for future research. The report also sets high hurdles for chimp experiments, calling for the establishment of an independent committee that would vet individual study proposals after they have passed routine NIH scientific review. For cases in which the burden on the animals is high, the benefit to humans would have to be “very high” to pass muster with the committee, says Daniel Geschwind, the other co-chair of the working group and a geneticist at the University of California, Los Angeles.

Three of nine ongoing invasive experiments — involving immunology and infectious diseases — could continue, the report says, because they meet the IOM criteria. These require a study to be needed for public health, that no alternative animal model exists, that performing the study in humans would be unethical and that the animals be maintained in socially and physically appropriate habitats. The report also says that 8 of 13 behavioural research or comparative genomics studies could be allowed to continue, but in some cases only conditionally (the funding for these experiments would not be renewed without passing the independent committee review).

The working group — a subgroup of the NIH’s Council of Councils, an interagency advisory body — was chartered by NIH director Francis Collins a year ago to advise the agency on how to implement the recommendations of the IOM report, which found that most chimpanzee research was not necessary. The working group recommendations are not binding; Collins is expected to provide a response in late March, after a 60-day period of public comment. But the report signals yet another significant step in an ongoing retrenchment. Last month, the agency announced that it will retire 110 chimpanzees to the national Chimp Haven sanctuary in Keithville, Louisiana, after they had been first slated to move to an active NIH-supported research centre in San Antonio, Texas.

The working group’s recommendations apply to the 360 research-eligible chimps that are owned by the biomedical agency and housed at facilities in Texas and New Mexico. The fate of an additional 91 animals that the NIH pays to maintain, but does not own, was not clear; the agency cannot compel the retirement of these animals, which are housed at the Texas Biomedical Research Institute (TBRI) in San Antonio.

Animal-rights activists welcome the report. “A chimpanzee should no more live in a laboratory than a human should live in a phone booth,” says Justin Goodman, the associate director of laboratory investigations at People for the Ethical Treatment of Animals in Norfolk, Virginia. The TBRI issued a statement saying that the report’s recommendations “will slow urgently needed medical advances necessary to prevent and treat human diseases that afflict millions of Americans as well as hundreds of millions of people living in other countries”.

Alice Ra’anan, director of government relations and science policy at the American Physiological Society in Bethesda, Maryland, says that, although the IOM report deems most chimpanzee research unnecessary, “the flip side of that is: some is necessary”.  The report recognizes the need for the NIH to maintain a small chimpanzee colony, she says. “We have to have a sustainable capacity going into the future.”