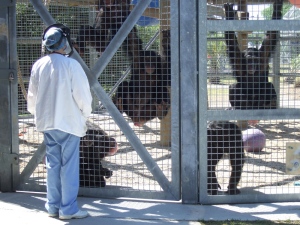 Chimpanzees at the New Iberia Research Center in Louisiana will not be available for federally funded invasive research from 2013.

Early on 21 September, Francis Collins called Wayne Pacelle, the president of the Humane Society of the United States (HSUS) in Washington DC, with news that the animal activist had been waiting for. Collins, director of the US National Institutes of Health (NIH), told Pacelle that the agency is to cease funding the troubled New Iberia Research Center (NIRC) in Louisiana, and will retire the 110 NIH-owned chimpanzees there.

The decision leaves just over 300 chimpanzees available for invasive research in two other NIH-supported research centres, and comes nine months after an NIH-solicited report from the US Institute of Medicine found that most invasive chimpanzee research was scientifically unnecessary.

In a statement, the NIH on 21 September said that the remaining population of chimpanzees can adequately serve current research needs, which include testing of monoclonal antibody therapies.

The NIH says that by August 2013, ten of the NIRC’s NIH-owned animals will be relocated to Chimp Haven, a federally funded sanctuary in Keithsville, Louisiana. The other 100 will move to the Texas Biomedical Research Institute in San Antonio, where they will be off limits for invasive research but accessible for behavioural studies and research using information collected through routine veterinary care.

The San Antonio centre currently houses 141 chimpanzees. The only remaining centre for NIH-funded invasive chimp research is the Michale E. Keeling Center for Comparative Medicine and Research in Bastrop, Texas, which has 167.

Pacelle welcomed the NIH's decision, calling it a “significant step forward in our goal toward ending invasive experiments on chimpanzees”. However, the HSUS — which in 2009 released an undercover video investigation that exposed repeated episodes of animal mistreatment at the NIRC — is pushing for more of the centre's animals to be sent to Chimp Haven.

The NIH says that the forested 80-hectare sanctuary will be at or near full occupancy with the addition of the ten NIRC animals, but the HSUS argues that the NIH should pay for more infrastructure at Chimp Haven to allow it to house more chimpanzees.

The NIRC’s longstanding contract to support NIH-owned chimpanzees was worth US$1.2 million in 2011. The current contract will expire in August 2013 and will not be renewed. The programme's principal investigator, Thomas Rowell, left the post of NIRC director in August.

But the NIH decision does not mean the end of the NIRC, which houses roughly 240 privately owned chimpanzees, and more than 6,000 macaques and other monkeys. The centre has a full roster of industry clients. “We look forward to expanding services and capabilities to support federal and private research and continuing to work with the NIH,” says Aaron Martin, communications director for the University of Louisiana at Lafayette, which owns the research centre.

The NIH is not the only US agency backing away from chimpanzee research. The US Centers for Disease Control and Prevention (CDC) said in a 10 September letter to the Physicians Committee for Responsible Medicine, an activist group based in Washington DC, that it no longer funds chimpanzee research. The CDC, which is based in Atlanta, Georgia, had as recently as 2010 been funding viral hepatitis studies in young female chimpanzees.

The Great Ape Protection and Cost Savings Act, a bill introduced into the US Congress in 2011, would phase out all federally supported invasive research on chimpanzees and retire the government-owned animals to sanctuaries.

This story originally stated that the NIRC's contract ended on 15 September 2012. In fact, it will run out in August 2013 and will not be renewed. The text has been changed to reflect that.