A NASA atmospheric simulation from a computer model that traces how carbon dioxide emissions disperse in the atmosphere.

Today just two satellites monitor Earth’s greenhouse-gas emissions from space. But if the world’s leading space agencies have their way, a flotilla of such probes could be launched beginning in 2030. The ambitious effort would help climate scientists to improve their forecasts — and it could also help to verify whether countries are upholding their commitments to reduce greenhouse-gas emissions.

But researchers will need to clear a daunting array of political and technical hurdles if they are to get the system — estimated to cost several billion dollars — off the ground. Competition for satellite launch slots is stiff: last year, for instance, the European Space Agency shelved plans for an advanced carbon-dioxide-monitoring probe in favour of a mission to measure plant growth. And scientists must still prove that satellite measurements of gases such as CO2 and methane can match the accuracy of data from observatories on Earth.

“We have a small fleet of satellites that are being launched, but these are all just scientific experiments,” says David Crisp, science team leader for NASA’s Orbiting Carbon Observatory-2 (OCO-2). “What we are trying to do now is just figure out how to monitor greenhouse gases from space.”

Scientists have access to data from a pair of pioneering satellites: OCO-2, which launched in 2014 and measures CO2, and Japan’s Greenhouse Gases Observing Satellite (GOSAT), which launched in 2009 and tracks CO2 and methane. NASA and the Japan Aerospace Exploration Agency are working to calibrate the instruments against each other and with a network of ground-based monitoring stations.

Both probes have a margin of error of about 0.5%, Crisp says. His team wants to reduce that to just 0.25% for the OCO-2 measurements.

Meanwhile, nations are queuing up a new suite of satellites to lay the foundations for a larger monitoring effort (see ‘Counting carbon’). China will launch a pair of CO2-monitoring satellites this year, and Japan plans to send up GOSAT-2 in 2018. NASA is looking ahead to OCO-3, which could launch as early as 2018. Unlike its predecessor, OCO-3 will not be a free-flying satellite, but a spectrometer built from OCO-2’s spare parts that will be installed on the International Space Station. 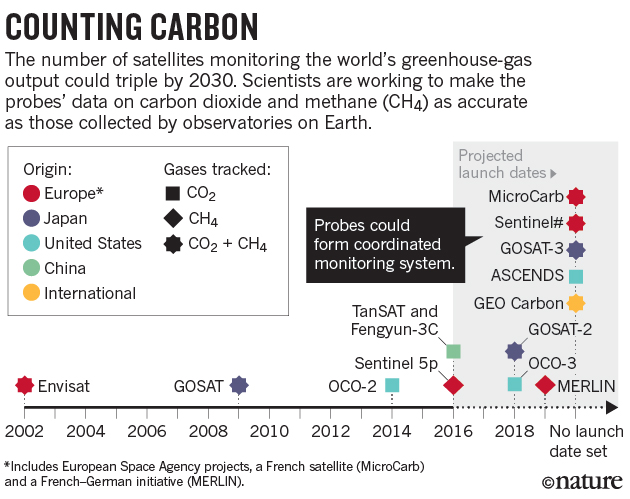 Crisp says that NASA scientists know how to build an instrument that is 20 times more powerful than OCO-2’s spectrometer, but that the agency does not have the funds to construct and launch it. “I can’t even compete for the money,” he says, “because it doesn’t exist.” At present, NASA is developing a satellite called ASCENDS that would use a laser to measure CO2; unlike OCO-2, it would be able to track the gas at night and during winter at high latitudes.

Together, these satellites will extend a continuous record of CO2 measurements that began in 2002 with SCIAMACHY, a spectrometer on the European Space Agency’s Envisat probe. The world’s space agencies want to transform this ad hoc system into a coordinated fleet of about six probes by 2030.

More than 60 agencies collaborated on a declaration finalized on 16 May that sets out a broad vision to develop and implement new monitoring technologies and to share the resulting data. France kick-started the effort last year, before December’s United Nations climate summit in Paris. At that meeting, nations adopted an agreement to curb heat-trapping emissions that also commits them to develop ways to verify whether they are meeting their climate goals. The nascent satellite programme could help nations to fulfil that requirement.

“It’s very general, but it’s a beginning,” says Jean-Yves Le Gall, the head of the French space agency, CNES. He says that the group is discussing how to distribute and use data from the system before its meeting in Mexico in September.

The space agencies’ efforts are a welcome surprise to many researchers. “I think it’s very important,” says Heinrich Bovensmann, a remote-sensing specialist at the University of Bremen in Germany. “Now we have to see what really comes out of it.”

“We’ve got training wheels on for the next decade.”

The current generation of satellites measure how much CO2 is in a given column of air. But what scientists and governments really want to know is where that CO2 came from. To pinpoint emissions produced by industrial activity, researchers must also determine how much CO2 is absorbed and released by land and ocean ecosystems.

This requires combining atmospheric CO2 measurements with accurate information about how the natural environment takes up and releases the gas, and plugging the data into detailed air-current models that can trace where the CO2 probably came from. In essence, the task requires developing something akin to current weather forecast systems — but run in reverse.

Achieving the precision needed to verify whether nations are meeting their emissions goals is a tall order, says Stephen Pacala, a climate researcher at Princeton University in New Jersey who led a 2010 report on space-based carbon monitoring for the US National Academies of Sciences, Engineering, and Medicine. He says that satellites would need to be more accurate than current greenhouse-gas inventories, which are calculated using a variety of data on fossil-fuel consumption and economic and land-use trends.

But Crisp and his colleagues remain confident that they can deliver greenhouse-gas data that will be useful for both scientists and policy­makers. “We’ve got training wheels on for the next decade,” he says. “Once we learn how to ride, we’ll build a bicycle.”