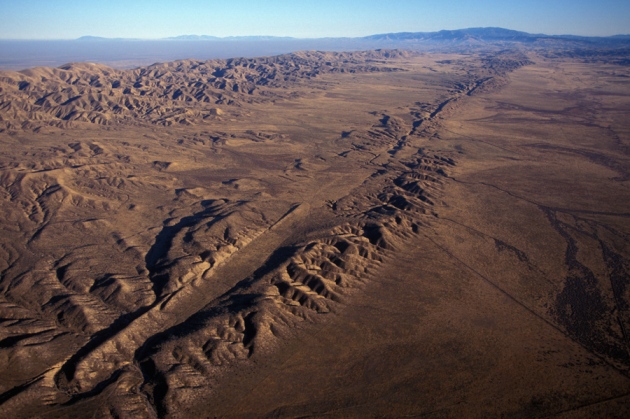 The San Andreas fault in California marks the meeting of the Pacific and North American tectonic plates.

Earth's tectonic plates may have taken as long as 1 billion years to form, researchers report today in Nature1.

The plates — interlocking slabs of crust that float on Earth's viscous upper mantle — were created by a process similar to the subduction seen today when one plate dives below another, the report says.

Starting roughly 4 billion years ago, cooler parts of Earth's crust were pulled downwards into the warmer upper mantle, damaging and weakening the surrounding crust. The process happened again and again, the authors say, until the weak areas formed plate boundaries. Other researchers have estimated that a global tectonic plate system emerged around 3 billion years ago.

The finding offers a possible answer to an enduring puzzle in geology: how Earth's tectonic plates emerged. The subsequent movement of the plates has erased much of the evidence of their origin, says Paul Tackley, a geophysicist at Swiss Federal Institute of Technology (ETH) in Zurich, Switzerland.

Prior studies suggested the age of the plates, based on evidence of subduction gathered from minerals preserved in ancient rocks. The oldest such specimens are 4-billion-year-old zircons found in the Jack Hills of Australia, which appear to have formed at temperatures and pressures that are indicative of subduction.

To go a step further and investigate how the plates formed, the study's authors developed a computer model of Earth's crust as it may have existed billions of years ago, on the basis of mineral grains found in mantle rock. The model included a low-pressure zone at the base of the crust, which caused a piece of the crust to sink into the upper mantle — mimicking conditions thought to have occurred early in Earth's history.

As the process repeated over time, it created a large tectonic plate with an active subduction zone. Over a much longer period, the same process could have created many tectonic plates, says co-author David Bercovici, a geophysicist at Yale University in New Haven, Connecticut. “We’ve got a physical mechanism to explain how it could have happened,” he says.

This stands in contrast to conditions on Venus, where similar subduction occurs but has not produced tectonic plates. Conditions on Venus are much warmer, allowing the crust to better heal after a piece sinks down into the mantle. Bercovici's model suggests that early subduction created weak spots in Earth's crust that are now plate boundaries. Plate tectonics is defined by the idea that strong plates are separated by weak boundaries, and action at those boundaries creates geological phenomena such as volcanoes, mountains and earthquakes, he notes.

“They produce a model that plausibly explains what we see,” says Michael Brown, a petrologist at the University of Maryland in College Park. It shows how to start subduction and how that could have progressed to global tectonics, and it provides an amount of time between the two — 1 billion years — that is consistent with the rock record, he adds.

Robert Stern, a geologist at the University of Texas in Dallas, contends that there is no firm evidence of plate tectonics earlier than 1 billion years ago, but says that their theory of the mechanism behind plate formation is “the first interesting example of how it might have occurred”.