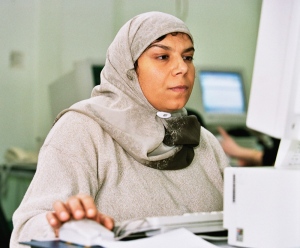 Arabic-speaking science students will have free access to educational resources under a new initiative.

A story by Nature Middle East.

The outgoing US Secretary of State, Hillary Clinton, last week launched a project that will lower obstacles to scientific education for Arabic-speaking people across the world.

In one of her last acts as America's top diplomat, Clinton launched the Open Book Project (OBP), which will make high-quality educational resources freely available online in the Arabic language.

The OBP – a joint initiative between the Arab League Educational, Cultural and Scientific Organization (ALESCO) and the US State Department – will focus mainly on science and technology. It came about after the first US-Arab League Dialogue last year.

Clinton said that the architects of the project hoped that by broadening access to information, people precluded from information by poverty or distance would be more likely to benefit. "Our hope is to lower geographic, economic, and even gender-based barriers to learning," she said at the project's launch in Washington.

Open educational resources (OER) can be accessed by anyone connected to the Internet. The content can be text, multimedia or audio-visual. The most notable come from universities, such as the Massachusetts Institute of Technology's (MIT) Open Courseware and also not-for-profit organisations, like the online education site, Khan Academy.

Materials in the programme will be released under an open licence, meaning creators or copyright holders are allowing it to be adapted and reused. Under this arrangement materials can be freely downloaded, printed and distributed.

The deputy assistant secretary for press and public diplomacy in the Near Eastern Affairs Bureau, Richard Schmierer, says the project was set up to respond to calls from students in the Arab world. "They have often noted concerns about the cost, quality, and availability of textbooks, and especially the fact that very few texts are available in science and technology fields," he says. "This programme addresses these concerns directly."

The OBP material, Schmierer explains, will only be available online initially but there are plans for distribution in other media.

Richard Rowe, director of the Open Learning Exchange who has established OER initiatives in Rwanda, Ghana and Nepal, says the traditional Arabic publishing industry may raise concerns about threats posed to its survival by free access.

"At first, the reaction seems to be that this is 'a nice thing'," Rowe says. "But now, as it seems to be taking hold and has the potential to affect the traditional publishing industry, resistance is growing to the idea that certain kinds of learning resources should be freely available."

However, regardless of resistance from publishers or potential cultural barriers, the fate of such initiatives will ultimately be determined by political will, he says. "That decision will be heavily influenced, not so much by the social benefits of this approach but by who speaks with whom in the hallways of governments."