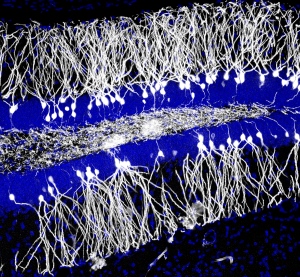 Newly-generated neurons (white) that integrated into the hippocampus, shown in this false-colour micrograph, had seemingly counterintuitive effects on memory.

For anyone fighting to save old memories, a fresh crop of brain cells may be the last thing they need. Research published today in Science suggests that newly formed neurons in the hippocampus — an area of the brain involved in memory formation — could dislodge previously learned information1. The work may provide clues as to why childhood memories are so difficult to recall.

“The finding was very surprising to us initially. Most people think new neurons mean better memory,” says Sheena Josselyn, a neuroscientist who led the study together with her husband Paul Frankland at the Hospital for Sick Children in Toronto, Canada.

Humans, mice and several other mammals grow new neurons in the hippocampus throughout their lives — rapidly at first, but more and more slowly with age. Researchers have previously shown that boosting neural proliferation before learning can enhance memory formation in adult mice2, 3. But the latest study shows that after information is learned, neuron growth can degrade those memories.

Although seemingly counterintuitive, the disruptive role of these neurons makes some sense, says Josselyn. She notes that some theoretical models have predicted such an effect4. “More neurons increase the capacity to learn new memories in the future,” she says. “But memory is based on a circuit, so if you add to this circuit, it makes sense that it would disrupt it.” Newly added neurons could have a useful role in clearing old memories and making way for new ones, says Josselyn.

The researchers tested newborn and adult mice on a conditioning task, training the animals to fear an environment in which they received repeated electric shocks. All the mice learned the task quickly, but whereas infant mice remembered the negative experience for only one day after training, adult mice retained the negative memory for several weeks.

This difference seems to correlate with differences in neural proliferation. Josselyn and her team were able to enhance memory persistence in newborn mice by genetically and chemically suppressing growth of new neurons after learning. And in adult mice, four to six weeks of regular exercise — an activity known to promote neuron proliferation — reduced the persistence of previously learned fear.

The genetic and chemical manipulations cannot be applied readily to humans, so the findings will be difficult to pursue in people, says Josselyn. But both mice and humans have ‘infantile amnesia’, or pronounced forgetting of early life experiences. Josselyn says that rapid neurogenesis in many young animals could help to explain the phenomenon across species.

The researchers also examined learned fear in guinea pigs and in Chilean rodents called degus — both of which have longer gestation periods than mice, and correspondingly reduced brain growth after birth. Baby degus and guinea pigs do not have infantile amnesia, but the researchers were able to mimic its effects in the animals through exercise or drugs that promote neuron growth.

“It's incredibly impressive. They covered everything from genetic and pharmacological interventions, to behavioral interventions, to cross-species comparisons," says Karl Deisseroth, a neuroscientist at Stanford University in California who is collaborating with the group on a separate project but did not contribute to the current study. Deisseroth, who in 2005 published the computational model Josselyn alludes to4, says he is excited to see strong experimental validation of the idea nearly ten years later.

Amar Sahay, a neuroscientist at Massachusetts General Hospital in Boston, says that most previous work, including his own, has focused on the effects of neurogenesis before memory formation. The latest work, by examining what happens after learning, paints a more complete picture of the relationship between neurogenesis and long-term memory management. “It’s a very exciting study,” says Sahay.