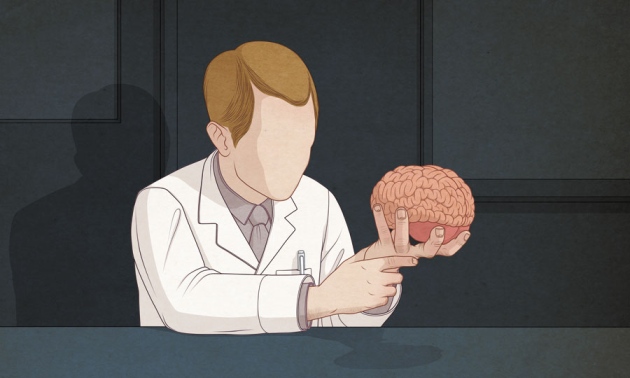 Roughly a year ago, I found myself at an elegant dinner party filled with celebrities and the very wealthy. I am a young professor at a major research university, and my wife and I were invited to mingle and chat with donors to the institution. To any outside observer, my career was ascendant. Having worked intensely and passionately at science for my entire adult life, I had secured my dream job directing an independent neuroscience research laboratory.

I was talking to a businessman who had family members affected by a serious medical condition. He turned to me and said: “You're a neuroscientist. What do you know about Parkinson's disease?”

My gaze darted to catch the eyes of my wife, but she was involved in another conversation. I was on my own, and I paused to gather my thoughts before responding. Because I had a secret.

It was a secret that I hadn't yet told any of my colleagues: I have Parkinson's.

I am still at the beginning of my fascinating, frightening and ultimately life-affirming journey as a brain scientist with a disabling disease of the brain. Already it has given me a new perspective on my work, it has made me appreciate life and it has allowed me to see myself as someone who can make a difference in ways that I never expected. But it took a bit of time to get here.

I remember the first time I noticed that something was wrong. Four years ago, I was filling out a mountain of order forms for new lab equipment. After a few pages, my hand became a quaking lump of flesh and bone, locked uselessly in a tense rigor. A few days later, I noticed my walk was changing: rather than swinging my arm at my side, I held it in front of me rigidly, even grabbing the bottom edge of my shirt. I also had an occasional twitch in the last two fingers of my hand.

I was 36 years old and it was the most terrifying time of my life, even without any of these mysterious symptoms. In the span of six months, I found myself in a job that I had spent 20 years preparing for, I became a father for the second time, I moved across the country to a town where we knew no one, and I was working alone in an empty lab wondering who left me in charge. I study the way that neuromodulatory chemicals such as dopamine affect neural activity and behaviour. And now, my own brain chemistry was rebelling against me.

I considered many possibilities. A brain tumour? Dystonia? Motor neurone disease? Huntington's disease? Multiple sclerosis? Was I just stressed out?

My diagnosis came from a young neurology fellow at one of the world's leading centres for the study of movement disorders. He felt more like a peer than an authority figure. He, too, spent a lot of time in the lab doing basic research and published papers in some of the same journals as me; we could have just as easily run into each other at a scientific meeting. As a result, the experience of my diagnosis was oddly collegial.

Right away, I wondered how long I could get away without telling my colleagues. I worried that I would be less likely to get the grants I needed to run my lab if the reviewers were not confident about investing in my future. I wondered whether students and postdocs would be afraid to join my research group. And, perhaps most importantly, how long I would be able to do experiments — the thing that I most love. Stiffness, shaking, fatigue, jerky movements, falls, drooling, laboured speech and the expressionless Parkinsonian mask. These could all be a part of my future.

I was diagnosed with Parkinson's more than two years ago. From that day, I have had a different relationship with the brain — my scientific focus for the past 20 years. I now know what it is like to have a brain disorder and can explore its manifestations first hand. Take the very peculiar symptom known as 'freezing'. Occasionally, when I attempt to lift my hand it well ... won't. Notice that I didn't say can't. There is nothing wrong with my arm. It is still strong and capable of moving, but I have to put effort, even focus, into getting it to move — frequently to such a degree that I have to pause whatever else my brain is doing (including talking or thinking). Sometimes, when no one else is around, I use my other hand to move it.

As a neuroscientist, it is simultaneously fascinating and terrifying to be directly confronted with the intersection of the neurophysiological and philosophical constructs of 'will'. The way my mind and body do battle forces me to reconsider the homunculus, a typically pejorative (among neuroscientists) caricature of a little man pulling levers inside our heads, reading the input and dispatching the output. Virtually all that we know about how the brain is organized belies this image, and yet there is a dualism to my daily experience.

Parkinson's, particularly in young people, is primarily a disorder of motor control, not of cognition. Still, my experience, however limited, leads me to speculate about what it is like to be trapped by a brain gone rogue. When one begins to lose the ability to interact with the world, and when one's faculties for clear perception and cognition are stripped away, what remains of the conscious self?

This brings me to one of the main reasons that I have kept my disease secret: the stigma of 'mental illness'. Because most people do not understand Parkinson's, it may be confused with cognitive disorders such as schizophrenia and Alzheimer's disease. I feel as sharp and productive as ever, but I wasn't sure that others would have faith in me at a time when my career is so fragile. So nearly every moment of my life became a performance, in which I tried to hide my symptoms. At work, at the grocery store, in my front yard, even in front of my kids — I am always keenly aware of my movements. And nowhere more so than at scientific conferences, such as at meetings of the Society for Neuroscience (SfN). You may not notice where my hands are, but I do. Often, I am sitting on them.

Does Parkinson's affect the way I do science? It does affect the day-to-day mechanics of experiments for me. The techniques used in my lab require considerable motor skill at times. I have had to modify how I do some things, including taking more time, compensating with my good hand or using a different grip on instruments. Still, it is pretty remarkable how capable I remain at the bench. The lesson in this for me is that 'lab hands' are more about experience, attention to detail and adaptation of methods than they are about raw dexterity. And the low-to-moderate doses of drugs that I take really help, as do sleep and exercise. By all indications, I will be able to continue research for many years, perhaps even indefinitely.

“It does affect the day-to-day mechanics of experiments for me.”

There is also the question of how this diagnosis affects my scientific direction. I am sometimes asked whether I will wholly or partly switch to studying Parkinson's disease. I suppose I might if the right project came along, but in general I remain focused on the questions that I have already set out for myself. I am also sometimes asked whether my diagnosis makes me impatient with the pace of discovery of cures. Here my answer is very clear. The dual perspectives of my condition and my position as an active researcher actually reinforce my belief in the importance of discovery science. I am keenly aware that those cures are possible only in the wake of decades of basic research. Above all, my diagnosis makes me want to do the best and most exciting science I can, because the privilege could disappear for any of us in the blink of an eye.

To tell or not to tell

Back at the dinner party, all eyes were on me waiting to hear my thoughts on Parkinson's. I wanted to tell my colleagues what I was going through. I wanted to look at our donor and say: “Funny you should ask that. Not only am I a neuroscientist, but I also have Parkinson's disease.” I wanted to launch into an eloquent monologue that put a personal face on the science of neurodegenerative disease. I wanted to conclude by saying, “And that is why basic brain research is so important.”

Instead, I dispassionately described the pathology and characteristic symptoms of Parkinson's. It was an intellectually engaging exchange, but it wasn't the conversation it could have been. This is one of the main reasons I decided to stop hiding.

Earlier this year, I told my department chair. Over the next few days, I told the administration, my lab and many of my colleagues. It took a lot out of me, but it ended up being one of the best decisions I ever made. Everyone at work was so supportive — I felt silly for having spent four years, since the onset of my symptoms, worrying about how they would react. In the subsequent months, it has become a non-issue for me in how I interact at work. Everyone treats me like any other colleague, and it is such a relief not to worry about who knows anymore. It is still uncommon for me to tell someone new, but I do not do anything to hide my condition, just enough to not call attention to it. For anyone reading this who is going through something similar, I am here to tell you that life is too short to run from who you are. Your colleagues might surprise you, and you can still be a great scientist despite a disability.

So why am I writing this piece anonymously? Because I don't want to be known to the scientific community as 'Parkinson's guy' before I am known as a scientist. That said, I'm not hiding any more, so if you care you can dig enough to find out who I am. I'm okay with that.