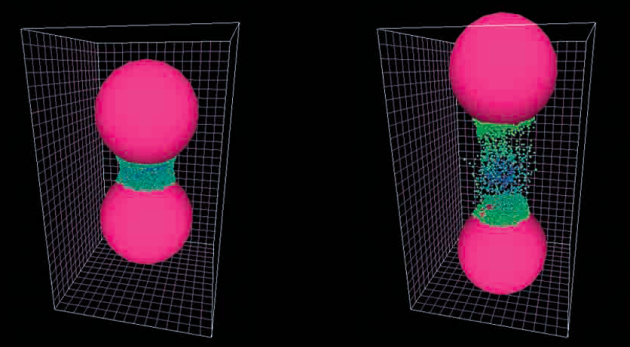 One of the most infamous near-Earth asteroids is held together by forces other than just gravity and friction. Researchers have found that asteroid (29075) 1950 DA is a loose blob of particles that clot together much as Moon dust collects on astronauts’ spacesuits.

Any mission to divert an asteroid on a collision course with Earth would need to take these newfound cohesive forces into account, suggest the findings, published in Nature1 on 14 August. This means that gently nudging an asteroid onto a new trajectory is potentially a safer option than blasting it to smithereens, Armageddon-style.

“You’d want to avoid interacting with the asteroid directly,” says Ben Rozitis, a planetary scientist at the University of Tennessee in Knoxville, and a co-author of the study.

Researchers have suspected that undetected cohesive forces help to hold some asteroids together — especially ‘rubble-pile’ asteroids, which are agglomerations of dirt and rock2. Some of these rotate slowly enough for the gravitational attraction between the particles to hold them together. But for faster-spinning asteroids, centrifugal forces would overwhelm the gravitational pull and rip the rocks apart.

Ben Rozitis tells Charlotte Stoddart about the forces holding together the asteroid 1950 DA.

Using information about how sunlight nudges the rock through space, along with measurements of its shape and the thermal properties of its surface, Rozitis and his team calculated its density. The rock turned out to be surprisingly lightweight, at just 1.7 times the density of water. That implied that the 1.3-kilometre-wide rock contains a lot of empty space, making it one of the rubble-pile group, Rozitis says.

If 1950 DA is a rubble-pile asteroid, then something more than gravitational attraction must be holding it together as it spins around. Calculations suggest it could spin no faster than about once every 2.2 hours if it were held together by gravity alone, but the asteroid goes faster than that, once every 2.1 hours. The researchers calculated that cohesive forces, exerting no more pressure than a coin resting in the palm of a hand, must be at work.

Understanding such forces could be important for NASA’s plan to drag an asteroid into lunar orbit to study it, or for commercial companies that claim they plan to mine asteroids, says Daniel Scheeres, an aerospace engineer at the University of Colorado Boulder who also wrote a related News & Views.

The forces would also be important if an asteroid were discovered to be heading towards Earth. One leading strategy to deflect it is a ‘gravity tractor’, a spacecraft that would fly alongside the asteroid, using its gravitational to pull the rock onto a new trajectory. Such an approach would be preferable to blasting the asteroid apart, says Rozitis, because nobody knows exactly how the cohesion would affect how the fragments blast apart.

“I just hope that an asteroid on a collision course with Earth will not be spinning rapidly and it will not be a rubble-pile asteroid,” says Bong Wie, an aerospace engineer at Iowa State University in Ames.