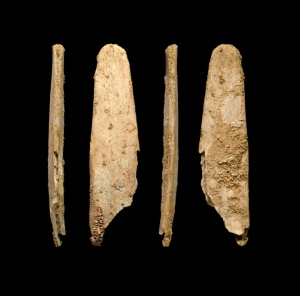 A bone tool found in a cave in southwestern France suggests that Neanderthals had sophisticated ways of working leather.

Excavations of Neanderthal sites more than 40,000 years old have uncovered a kind of tool that leather workers still use to make hides more lustrous and water resistant. The bone tools, known as lissoirs, had previously been associated only with modern humans. The latest finds indicate that Neanderthals and modern humans might have invented the tools independently.

The first of the lissoir fragments surfaced a decade ago at a rock shelter called Pech-de-l’Azé in the Dordogne region of southwest France. Archaeologist Marie Soressi of the Max Planck Institute for Evolutionary Anthropology in Leipzig, Germany, knew the tool at once, says her colleague Shannon McPherron.

The tools are also known as slickers and burnishers, says McPherron. Soressi contacted luxury-goods manufacturer Hermès in Paris, and found that their high-end leather workers use just such a tool. “She showed them a picture, and they recognized it instantly,” says McPherron. The company's line includes the wildly popular Birkin handbag, which sells for around US$10,000 and upwards.

McPherron says that a single artefact, however, was not enough for the researchers to draw broad conclusions. “You find one, and there’s always some doubt. You’re worried that it’s not a pattern — that it’s anecdotal behaviour.” But subsequent digs at Pech-de-l’Azé and nearby Abri Peyrony turned up further lissoir fragments, leading the researchers to conclude that Neanderthals made the tools routinely.

The lissoirs are not the first Neanderthal bone tools ever discovered. But McPherron says that they stand out from others: most bone tools are facsimiles of stone tools, but lissoirs take advantage of the physical properties of bone, such as its texture and ability to bend without breaking. Neanderthals probably fashioned the lissoirs from the long, flexible ribs of deer.

The researchers cannot be certain that Neanderthals used the bone tools to burnish hides. But McPherron points out that his team found only the tips of tools, which may have broken off after polishing leather. Furthermore, the team created its own lissoirs and used them to smooth a dry hide, generating small ridges on the implements similar to those found on the Neanderthal tools. The team's work is published this week in Proceedings of the National Academy of Sciences1. 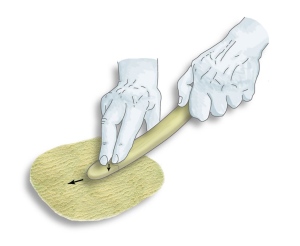 Neanderthals might have used the tools known as lissoirs, or burnishers, to make hides shinier or more water-proof.

McPherron says that the origin of the lissoirs is likely to be the most contentious aspect. There is little doubt that the tools belonged to Neanderthals, because modern humans did not live in Pech-de-l’Azé or Abri Peyrony. But uncertainties surrounding the age of the artefacts make it difficult to determine whether modern humans learned to make lissoirs by copying Neanderthals, or vice versa — or if the two closely related species invented the bone tools independently.

Different techniques dated the two sites to between 51,000 and 41,000 years old. The most recent date overlaps with the earliest known modern-human occupations of western Europe 42,000 years ago, but most archaeologists agree that only Neanderthals called Europe home at the time of the earliest date. McPherron is now looking for lissoirs at even older Neanderthal sites to settle the confusion.

Paul Pettitt, an archaeologist at Durham University, UK, thinks that the tools precede the arrival of Homo sapiens to Europe, so their presence “cannot be an isolated occurrence, but was part of an indigenous Neanderthal tradition”. The tools also point to the sophistication of Neanderthal fashions, Pettitt says — if not their taste in handbags.