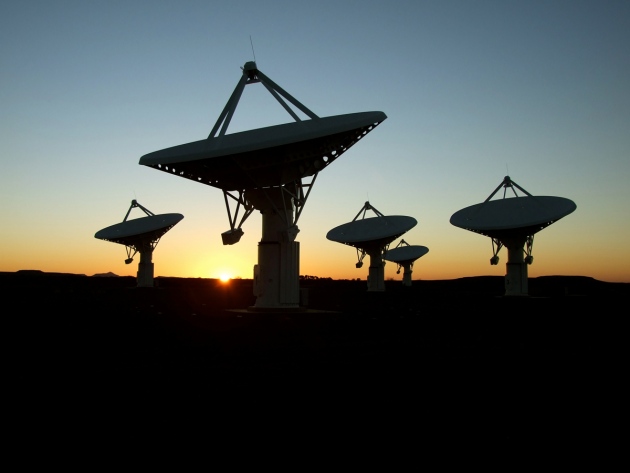 The Square Kilometre Array will be sited in both South Africa and Australia.

The battle for the world's largest radio telescope has ended in a draw.

South Africa and Australia will both host the Square Kilometre Array, a €1.5-billion (US$1.9-billion) project made up of 3,000 15-metre-wide dishes and an even larger number of simple antennas. The decision was announced at a meeting outside of Amsterdam in the Netherlands, after a vote by SKA's international board.

Under the terms of the deal, South Africa will receive most of the dishes, and Australia will host the low-frequency radio antennas.

"Science is the winner," says SKA board chairman John Womersley. By building on existing pilot projects in both countries, SKA will be made even more powerful, he says.

Officials in Australia and South Africa responded warmly to the news. "I think it's an excellent decision," says Philip Diamond, head of astronomy and space science at Australia's Commonwealth Scientific and Industrial Research Organisation in Marsfield. "We're really extremely delighted about this," adds Phil Mjwara, director general of South Africa's Department of Science and Technology.

When completed around 2024, the telescope will be able to image the Universe at the time when the first stars and galaxies began to form. It will be 50 times more sensitive than current instruments and capable of spotting a television signal from a planet orbiting a nearby star.

South Africa has been in a fierce competition with a joint bid from Australia and New Zealand. In March, South Africa narrowly won out in a scientific assessment. The science panel's decision has not been made public, but low construction costs and the high altitude of the site in the remote northern reaches of the country were believed to have given it the edge. Australia and New Zealand have argued that their site in western Australia would have better infrastructure and lower insurance costs.

In phase two, the remaining dishes will be assembled in South Africa, along with mid-frequency aperture arrays and the rest of the dipole antennas will be installed in Australia. This will give the Australian site a wide-field survey capability, whereas South Africa will be able to look deeply into a narrow part of the sky.

Splitting the site is politically expedient, but will not necessarily be cheap, nor easy. Each of the SKA's thousands of elements will transmit many gigabytes of data per second. Those data will pass through a correlator that will assemble them into a single image, then undergo further processing. As a result, both sites will require high-speed networking and powerful supercomputers, along with roads and buildings. The redundancy could significantly raise the costs of the project.

In phase one, the cost will not rise above 10% of the originally projected €350 million, according to Womersley. Each site has already invested around €120 million in their respective pilot projects, and the board determined that the added capability that those projects would provide make the additional investment worthwhile. "It may be politically expedient, but it's also scientifically driven," Womersley says.

Costs for the second phase seem less certain. "Because we don't have a detailed design yet for phase two it was next to impossible to estimate the costs," says Diamond. Still, he remains optimistic that they can be kept low because computing and networking resources are comparatively cheap.

With the siting issue resolved, the SKA organization will have to turn its attention to financing and the final design. Rather than providing funding directly, SKA's eight member states are likely contribute equipment and expertise, and Diamond says that they have already contributed €90 million between them.

"We've really got to get down into the detail of what we're going to build," he says.

Construction is expected to begin as soon as 2016 and first observations could be made by the end of the decade.