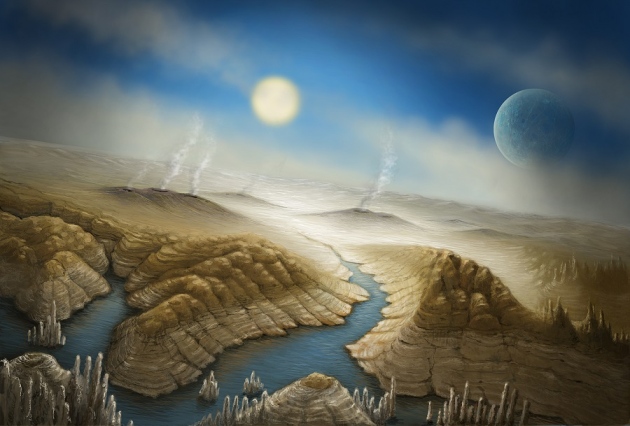 An artist's impression of exoplanet Kepler-452b, which is likely to be rocky, just as Earth is.

Astronomers have spotted the closest thing yet to the first true ‘Earth twin’ — a small planet orbiting the bright star Kepler 452, at a distance where liquid water could exist1.

“It is the first terrestrial planet in the habitable zone around a star very similar to the Sun,” says Douglas Caldwell, an astronomer at the SETI Institute in Mountain View, California.

The alien world is 60% larger than Earth and orbits its star at a distance similar to that between Earth and the Sun. The star itself lies 430 parsecs from Earth, in the constellation Cygnus. It is slightly brighter than the Sun, making its planet a better Earth analogue than planets announced last year and in January, both of which orbited dim, cool stars.

NASA announced the planet, dubbed Kepler-452b, on 23 July, as part of the latest harvest of worlds spotted by its Kepler spacecraft. From 2009 to 2013, Kepler stared at a small patch of sky looking for slight decreases in starlight that signalled a planet moving, or transiting, across the face of a star. The spacecraft has discovered more than 1,000 confirmed planets, including Kepler-452b, and more than 4,660 candidates.

The latest batch includes 11 other candidate planets that are all less than twice the diameter of Earth and orbit in their stars’ habitable zones, says Natalie Batalha, Kepler's mission scientist and an astronomer at NASA's Ames Research Center in Moffett Field, California. 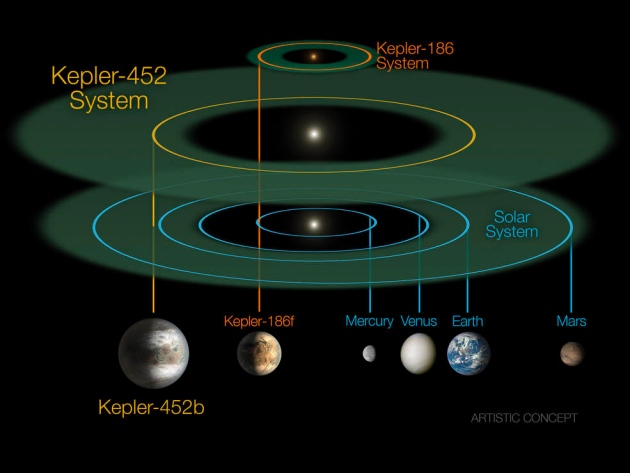 Kepler-452b and its star compared to the Solar System and a previously discovered Earth-like exoplanet.

Scientists cannot measure the mass of Kepler-452b directly, but modelling suggests that the planet is five times as massive as Earth. That would put it squarely in the category of rocky planets, which includes Earth, rather than gas giants such as Neptune. Kepler-452b whirls around its star once every 385 days, tantalizingly close to Earth's 365-day year.

The planet's star is about 1.5 billion years older than the 4.5-billion-year-old Sun, and Kepler-452b is about the same age. During its first 5 billion years, the planet would have received less energy from its star than Earth does, but it may now offer a glimpse at Earth's future. Kepler-452b's star is growing hotter and brighter as part of its natural evolution, so anyone living on the planet would see his or her world drying out — just as Earth will as the Sun evolves.

SETI Institute astronomers have listened for signals from extraterrestrials in the Kepler 452 star system, using the Allen Telescope Array in northern California — but with no luck so far, says institute astronomer Seth Shostak.

Kepler's latest batch of exoplanets comes from the first complete analysis of the spacecraft's original data. The craft collected those observations during the four years that it operated before a crippled reaction wheel cut its planned mission short. Kepler scientists say that they can probably still pinpoint more planets in the original data, by running analyses to reduce the signal-to-noise ratio — a project that will take them about a year.

“Imagine you're trotting through the weeds in a field, looking for precious stones on the ground,” Batalha says. “We're going through with a lawnmower so that the stones are easier to see.”

In the meantime, Kepler continues to hunt exoplanets in a more limited mode. The European Southern Observatory recently began a search for transiting planets from its telescopes in Chile. NASA plans to launch a satellite called TESS in 2017 to do the same from space.

Updated (24 July, 12:00 a.m. BST): Added a second comment from Batalha and information on other exoplanet-hunting efforts.