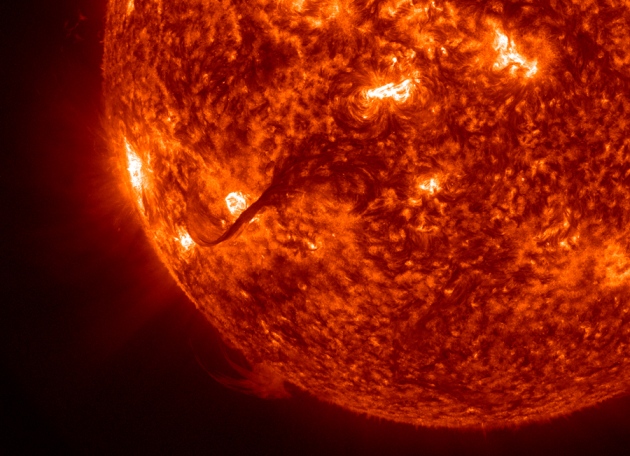 The IRIS telescope will zoom in on the chromosphere, pictured here by the Solar Dynamics Observatory.

For the most part, the Sun gets plenty of attention from astronomers. Its surface, or photosphere, bristles with sunspots and erupts with powerful flares. Its outer atmosphere, or corona, shimmers with gossamer arcs mapped out by magnetic field lines. But between these two charismatic regions lies a swathe some 1,700 kilometres thick — the chromosphere — that has largely been overlooked.

This region is about to have its day. On 26 June, NASA plans to launch the US$181-million Interface Region Imaging Spectrograph (IRIS). The instrument’s ‘eyes’, working in the ultraviolet spectrum and designed to follow the flow of matter and energy in the chromosphere, will help astronomers to work out how the photosphere and corona are linked — including how temperatures soar from some 6,000 °C at the solar surface to more than 1 million degrees in the corona. The chromosphere is “a missing piece of the puzzle”, says Bart de Pontieu, the IRIS science lead at the Lockheed Martin Solar and Astrophysics Laboratory in Palo Alto, California.

Other missions have looked at the chromosphere before, including the Sunrise 2 high-altitude balloon observatory, which landed on 17 June after a five-day flight in the Arctic. But IRIS will hone in specifically on the chromosphere with greater spatial and temporal resolution than many of its predecessors.

IRIS will take images every five seconds, will obtain spectra every one to two seconds and will be able to discern objects as small as 240 kilometres across. “It’s just staggering the dynamics you can see when you have that kind of resolution,” says Scott McIntosh, an IRIS co-investigator at the National Center for Atmospheric Research in Boulder, Colorado.

That resolution will help researchers to map out small, finger-like jets of plasma that were discovered in 2007. Using data from the Japanese Hinode satellite and NASA’s Solar Dynamics Observatory, de Pontieu and his colleagues tracked these ‘type II spicules’, which rapidly funnel mass and energy up through the chromosphere and could be a significant factor in the coronal heating problem. But they appeared and died away in minutes — faster than anyone had expected (B. de Pontieu et al. Science 331, 55–58; 2011). “Suddenly it became clear that this new class of events was very important all over the Sun,” says Alan Title, a solar physicist at Lockheed Martin and IRIS principal investigator.

IRIS’s 20-centimetre telescope and imaging spectrograph are designed to study phenomena that change as rapidly as these spicules. If all goes to plan, an aircraft carrying IRIS will take off from Vandenberg Air Force Base in southern California before releasing a Pegasus rocket that will launch IRIS the rest of the way into space. IRIS will fly in a polar orbit, 660 kilometres above Earth’s surface, constantly facing the Sun. Its narrow field of view will be trained on just a small part of the chromosphere: about 1% of the Sun’s disk.

First light is expected about three weeks after launch, with science data arriving several weeks after that. The IRIS team plans to start by answering some long-standing questions about the chromosphere, says McIntosh, such as how many photons are emitted as solar plasma rises up through the chromosphere and how many form as it falls back down, cooling and condensing along the way.

Title says that one of the reasons IRIS is happening now is because modelling work carried out over the past decade has given solar physicists the confidence that they could actually understand the data flowing from a chromospheric mission. The mission team includes modellers such as Mats Carlsson of the University of Oslo, who says that IRIS will help him to understand why his models don’t come up with the right amount of heating for the upper chromosphere. “Finally we have some hope of being able to understand these things, by combining simulations and observations,” says Carlsson.

The spacecraft will begin its mission at an opportune time: the Sun is now at the peak of its 11-year cycle of activity, although this peak is much less impressive than the last one. By one measure of solar activity — the amount of radiation emitted by solar storms to reach Earth — the current maximum looks about the same as 1996’s solar minimum, says Dean Pesnell, a solar physicist at NASA’s Goddard Space Flight Center in Greenbelt, Maryland.

IRIS didn’t necessarily have to fly at a solar maximum, but it will be a boon should the Sun flare up during the two-year mission, says de Pontieu. One of the mission’s scientific goals is to better understand how kinked magnetic field lines at the Sun’s surface trigger big eruptions of matter and energy. IRIS will be able to track these large flares up into the corona, connecting the dots through the earliest phases of a flare’s life cycle.

And there is another way in which the mission’s timing will be auspicious. In November, the comet ISON is expected to have a close brush with the Sun. IRIS, along with other solar missions, will be in a prime position to watch this happen and could spot unexpected events. There is precedent: in December 2011, a comet named Lovejoy flew through the solar corona, and surprised physicists with the way its waving tail interacted with the Sun’s magnetic field.