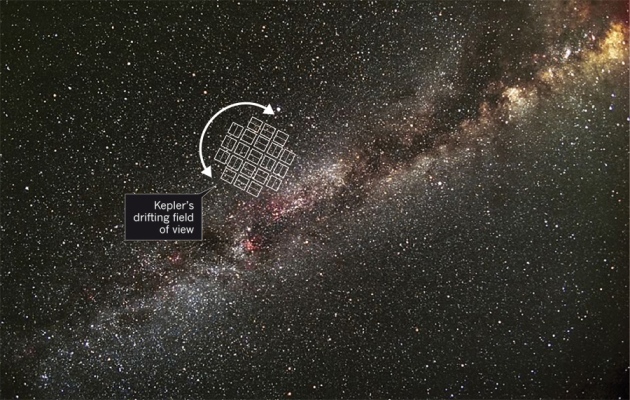 Kepler’s field of view is now drifting because of a failure of two of its four reaction wheels.

On 15 August, the agency ann­ounced that it would stop trying to revive the failed reaction wheels that gave the planet-hunting telescope its precise pointing ability. That essentially brings an end to the main goal of the 4-year-old mission, which has found 3,548 candidate planets by looking for tiny dips in starlight that indicate a planet’s passage, or transit, across that star.

But the agency left room for hope: two weeks earlier, it had asked astronomers to submit ideas by 3 September on how the hobbled spacecraft might still perform good science. Nature has learned about some of the options in the running, out of the dozens of proposals expected.

Ideas range from a survey of potentially hazardous near-Earth objects to a study of Jupiter-sized exoplanets in large orbits. Kepler scientists will sort through the proposals and decide by 1 November which ones, if any, to recommend to NASA headquarters for further review.

To secure funding from the space agency, the Kepler team will have to show that the studies could not be done by other telescopes. This will be no easy task — especially given that engineers are not sure how well Kepler can perform with just two of its four spinning reaction wheels, which act as stabilizing gyroscopes.

With three working wheels (a fourth was a spare), Kepler was able to exactly counter­balance the persistent push of sunlight, locking on to targets with such precision that light from a particular star always fell on the same tiny fraction of an individual pixel. But the wheels have a history of poor performance, and in July 2012 one failed — followed by another in May (see go.nature.com/4w1ufr). Although the craft’s thrusters can still act as a crude version of a third wheel, they cannot replicate the pointing accuracy that three wheels provided, and the telescope’s focus will drift. Over time, starlight will start to fall on different pixels with slightly different sensitivities. “Every single day, it’s as if you’re going to use a different detector, a different telescope,” says Kepler scientist William Welsh of San Diego State University in California.

Kepler’s drift could be minimized by keeping it pointed in the same plane in which the craft orbits the Sun. But that presents a complication. Some of the best science is expected to come from follow-up observations of the field of about 150,000 stars that Kepler has been focused on, and that star field does not lie in the plane.

In one proposal, offered up by Welsh and his colleagues, the craft would continue to stare at this original star field to search for Jupiter-sized planets. Such bodies are sufficiently large that when they pass in front of their parent star they produce a dip in light that can be detected by Kepler even in its compromised state.

Welsh’s group would target Jupiters for which Kepler has recorded only a few transits — those that take more than a year to orbit their star. It usually takes a minimum of three transits to confirm the existence of a planet. Catching the third transit could make the difference between a possible and a definitive discovery.

The craft is too shaky to discover an Earth analogue from scratch, but Welsh suggests that it might also be possible for Kepler to add statistical significance to Earth-sized candidates for which transits have already been captured. And David Hogg, an astronomer at New York University, believes that, over the course of many months, Kepler’s drift could be used to map out the different light responses of the pixels. That calibration, if detailed enough, could be enough for Kepler to resume its hunt for Earth analogues, says Hogg.

“We’re in a real quandary. We just don’t know what Kepler can do.”

Daniel Fabrycky, an astronomer at the University of Chicago in Illinois, has an alternative follow-up study in mind. He and his colleagues have proposed looking at planetary systems in which densely packed planets are affected by one another’s gravitational pulls — creating periodic cycles in which the timing of transits are first advanced and then delayed. The light dip during a transit reveals only the size of the eclipsing planet, but knowledge of transit-time variation yields the planet’s mass, which is crucial for working out the density and composition of the bodies. Like Welsh, Fabrycky wants Kepler to zero in on planetary systems with long orbits, for which the full cycle of these transit-timing variations has not yet been seen.

But Andrew Gould, an astronomer at Ohio State University in Columbus, says that he is sceptical about using the craft to simply follow up on its original tasks when its pointing precision has been degraded by a factor of as much as 1,000. “People really have to break out and come up with new ideas,” he says.

Perhaps taking such advice to heart, Fabrycky’s team has a second proposal: putting Kepler to work not as a planet hunter, but as a sentinel for near-Earth objects, including asteroids several hundred metres in diameter that might be on a collision course with Earth. A survey of space rocks would take advantage of Kepler’s large field of view. And at least part of the study could be completed with Kepler looking for targets within its orbital plane, so as to optimize its pointing.

Gould has proposed another scheme, in which Kepler would survey stars towards the Milky Way’s central bulge for signs of planets, using a technique known as microlensing.

Microlensing relies on a prediction of Einstein’s theory of general relativity: the gravity of any massive object bends light. Like a magnifying lens, a foreground star bends and brightens light from stars behind it. A single foreground star, or microlens, produces a characteristic brightening curve, but if that lensing star has a planet, the curve will have an additional wiggle.

Researchers have already used microlensing to reveal some 40 planets towards the centre of the Galaxy, but the observations typically do not reveal masses. By observing microlens planets using Kepler and ground-based telescopes at the same time, differences in transit duration and brightness emerge that can yield the planets’ mass. However, the survey could be performed for only about five weeks of the year because of limited chances to view the Galactic Centre without interference from the Sun.

If any of the proposals recommended by the Kepler team seems worthwhile to NASA, they will be examined early next year by a review panel of external scientists. At that stage, a repurposed Kepler would face its biggest hurdle — a competition for the limited pot of funds against nine other astrophysics missions, including the Hubble Space Telescope and the Fermi Gamma-ray Space Telescope. On receiving recommendations from the review panel, NASA will make its final funding decisions next June.

Not everyone is rooting for Kepler. Doug Finkbeiner, an astronomer at the Harvard-Smithsonian Center for Astrophysics in Cambridge, Massachusetts, wants NASA to support missions that are still healthy. He has used Fermi to discover two galaxy-sized bubbles of ionized gas blowing from the centre of the Milky Way, and is counting on continued funding for the γ-ray telescope. “My very biased and self-interested perspective is that I hope we let Kepler die,” he says.

This article originally inflated the size of asteroids that Kepler could watch for — they would be several hundred metres in diameter rather than several hundred kilometres. The text has now been corrected.