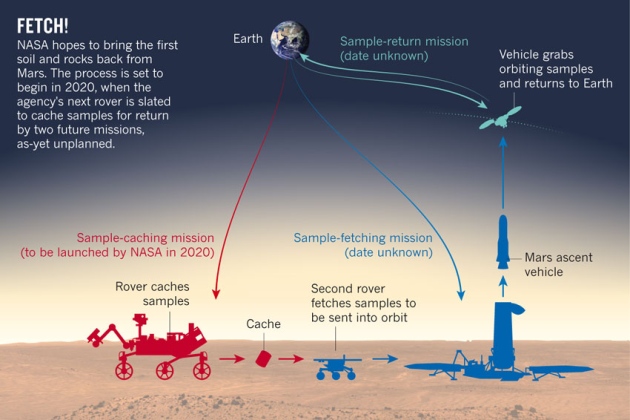 NASA’s Curiosity rover is in the prime of its life, exploring the rocks, soil and air of Mars. But the agency is already planning its successor — and this time, the scientific stakes are higher.

On 14 May, planetary geologists will gather in a hotel near Arlington, Virginia, to begin hammering out where NASA might send its next Mars rover, set to launch in 2020. The plan is to build a machine that is nearly identical to Curiosity, and equip it with fresh instruments to probe the Martian surface.

Although NASA has yet to finalize details, the next rover will almost certainly have a hugely important, unprecedented job: to collect and store rocks and soil for a future spacecraft to bring back to Earth. It would be the first ever sample return from Mars.

“The next 20 years of Mars exploration hinges on where this rover goes,” says Philip Christensen, a planetary scientist at Arizona State University in Tempe. “It has to tell us something fundamental about the broader history of Mars.”

NASA’s workshop this week will discuss possible landing sites. Many look familiar: they were on the longlist of sites for Curiosity’s landing in 2012. Such locations include Mawrth Vallis, an ancient valley strewn with minerals formed in water, which would help with the rover’s main goal of finding and exploring environments that could once have been suitable for life. The European Space Agency is also considering the site for its ExoMars rover, which will launch in 2018 (see Nature 508,19–20; 2014).

Other possibilities for 2020 include several ancient, now-dry lakes and deltas where flowing water once laid down sediment. These areas, including Eberswalde Crater, were among the top candidates for the Curiosity mission. They were passed over in favour of Gale Crater, where the rover is laboriously trekking towards a 5-kilometre-high mountain of sediments. Curiosity has yet to detect concentrated amounts of organic material, but the rich river-laid sediments in Eberswalde are likely to offer that bounty, says geologist Ross Irwin of the Smithsonian Institution in Washington DC.

The 2020 rover will also have the crucial extra task of collecting samples. Scientists have talked for decades about getting their hands on Martian rocks to look for signs of past life. They have studied meteorites that originated on Mars, but no space agency has yet been able to bring back samples directly, in part because of the cost and in part because of technical failures (see Nature 479, 275–276; 2011).

NASA’s plan for bringing back Martian samples would involve a succession of missions over many years (see ‘Fetch!’). Step one would need a rover to collect and store roughly 30 narrow cylinders of rock and soil, either on board or on the ground. In step two, an unmanned rocket would fly to Mars and deploy another rover to fetch the samples and then blast them into orbit. Step three would be to capture that orbiting package and fly it back to Earth.

Being able to look at a chunk of rock from a particular location and understand its context would be a crucial step forward, says John Mustard, a planetary geologist at Brown University in Providence, Rhode Island. “If samples were returned, the science that could come out of that would be equivalent to when the Apollo samples came back from the Moon,” he says. “It changes everything.”

Some scientists hope that the 2020 rover will visit new locations, whereas others want to return to sites explored by previous rovers such as Curiosity or Spirit. Both approaches have benefits, says Dawn Sumner, a geologist at the University of California, Davis. “With a new site there are more unknowns, but that means we are likely to learn more about the diversity of Mars as a planet,” she says.

Much depends on what instruments the rover will carry. Fifty-eight teams have submitted proposals; in July or later, NASA will select a handful of designs. Curiosity’s tools include an instrument that it deployed on 5 May to drill into a sandstone rock named Windjana. The rover has already drilled at two other sites, which yielded signs that an ancient lake bed once existed at Gale Crater.

The destination of the 2020 rover will not be constrained by science alone: engineers must be able to manoeuvre the craft to the ground safely. They may use a variant of Curiosity’s ‘sky crane’ descent, in which thrusters guided the rover to a precise location.

This week’s workshop is the first step in narrowing down the list of landing sites, but the final decision might not be made until 2019. “It will be a tremendously interesting and fascinating time,” says Matthew Golombek, a planetary geologist at the Jet Propulsion Laboratory in Pasadena, California, who is leading the site-selection process. “The most important thing for this spacecraft is not so much to learn about the rocks on Mars, but to learn enough to know if those rocks have the stuff in them that you want to bring back to Earth.”