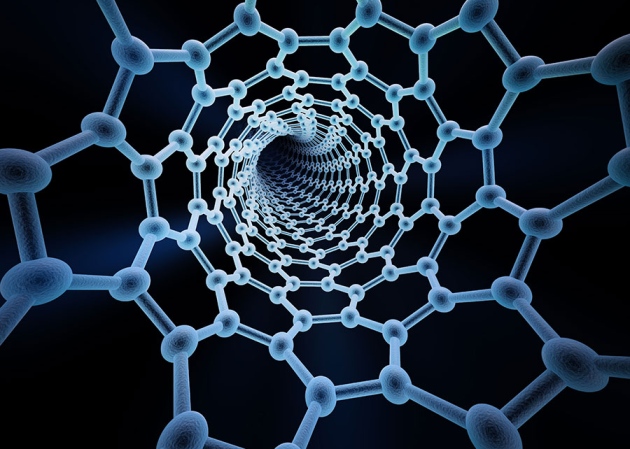 Carbon nanotubes can be used to detect levels of biological molecules in vivo.

The future of medical sensors may be going down the tubes. Chemists are developing tiny devices made from carbon nanotubes wrapped with polymers to detect biologically important compounds such as insulin, nitric oxide and the blood-clotting protein fibrinogen. The hope is that these sensors could simplify and automate diagnostic tests.

Preliminary experiments in mice, reported by scientists at a meeting of the American Chemical Society in Boston, Massachusetts, this week, suggest that the devices are safe to introduce into the bloodstream or implant under the skin. Researchers also presented data showing that the nanotube–polymer complexes could measure levels of large molecules, a feat that has been difficult for existing technologies.

“Combining carbon nanotubes with these attached templates imparts the unique ability to detect larger molecules, which has been challenging because we don't have good tools for recognizing them,” says bioanalytical chemist Heather Clark of Northeastern University in Boston. Although it is important to thoroughly investigate the sensors' compatibility with the human body, she notes that “as this exciting technology moves forward, it will be interesting to learn more”.

Efforts to develop long-lasting implantable sensors have been stymied by the human body's inclination to protect itself and to recycle biological material. Devices can become wrapped in scar tissue or have their components broken down by the body.

“Anything the body makes, it is meant to degrade,” says chemical engineer Michael Strano, whose lab at the Massachusetts Institute of Technology (MIT) in Cambridge is behind much of the latest work1. “Our vision is to make a sensing platform that can monitor a whole range of molecules, and do it in the long term.”

Strano’s team builds sensors by coating carbon nanotubes — single cylinders of graphene — with various polymers of different configurations. Then the team screens them against libraries of molecules that the researchers want to detect. The approach takes advantage of nanotubes’ natural ability to fluoresce: when light hits a sensor, the nanotube dims or brightens depending on whether it is bound to a molecule of interest.

To design one sensor, MIT researchers coated nanotubes with a mix of polymers and nucleotides and screened for configurations that would bind to the protein fibrinogen. This large molecule is important for building blood clots; its concentration can indicate bleeding disorders, liver disease or impending cardiovascular trouble. The team recently hit on a material that worked — a first for such a large molecule, according to MIT nanotechnology specialist Gili Bisker. Bisker said at the chemistry meeting that the fibrinogen-detecting nanotubes could be used to measure levels of the protein in blood samples, or implanted in body tissue to detect changing fibrinogen levels that might indicate a clot.

The MIT team has also developed2 a sensor that can be inserted beneath the skin to monitor glucose or insulin levels in real time, Bisker reported. The team imagines putting a small patch that contains a wireless device on the skin just above the embedded sensor. The patch would shine light on the sensor and measure its fluorescence, then transmit that data to a mobile phone for real-time monitoring.

Another version of the sensor, developed3 at MIT by biomedical engineer Nicole Iverson and colleagues, detects nitric oxide. This signalling molecule typically indicates inflammation and is associated with many cancer cells. When embedded in a hydrogel matrix, the sensor kept working in mice for more than 400 days and caused no local inflammation, MIT chemical engineer Michael Lee reported. The nitric oxide sensors also performed well when injected into the bloodstreams of mice, successfully passing through small capillaries in the lungs, which are an area of concern for nanotube toxicity. Iverson, who is starting her own lab at the University of Nebraska–Lincoln, plans to further develop the nitric oxide sensors for cancer treatments. For example, surgeons might use the device to determine whether they have removed every tumour cell from a patient.

"You hear that a surgeon will say, ‘I think we got it all,’” Iverson says. “If we can detect a single inflamed cell, then they'll know they got it all."