Technology that its parent company says will sequence a human genome in just 15 minutes opened its first data run to scrutiny today.

Oxford Nanopore Technologies, based in Oxford, UK, revealed the initial results from its GridION system at the Advances in Genome Biology and Technology meeting in Marco Island, Florida. The firm expects to start selling its new machine in the second half of this year and also plans to launch the world’s first miniaturized, disposable sequencer — the MinION — which will retail for less than US$900. 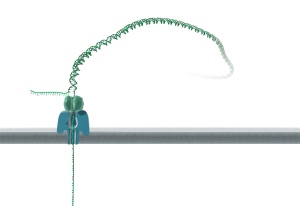 Fast track: nanopore sequencing identifies individual bases as a strand of DNA is passed through a pore.

Given its flexibility, scalability and low entry price, “this technology could have a seriously disruptive effect on the sequencing industry,” says Daniel MacArthur, a geneticist who blogs about the genomics industry.

That industry is already seeing significant jockeying for position with Swiss drug giant Roche last month launching a takeover bid for the manufacturer of the sector’s dominant technology: Illumina of San Diego, California (see Roche takeover bid poses challenge to Illumina). In the same month, up-and-coming company Ion Torrent Systems of Guilford, Connecticut, vowed to begin selling a machine by the end of the year that can sequence an entire human genome in a day for less than $1,000 per sequence.And last April, Pacific Biosciences of Menlo Park, California, launched its own sequencing technology.

Oxford Nanopore’s system uses nanopore sequencing to rapidly read DNA sequences. A strand of DNA is fed through a biological pore and the various bases are identfied by measuring the difference in their electrical conductivity as they pass through the pore (see Personal genomes: Standard and pores).

The launch of the nanopore machines marks the end of a decades-long wait. Nanopore technology was first mooted in the early 1990s, and as it has taken so long to get to the market, many scientists have reserved judgement on the technique’s capabilities until they can see the results for themselves. But upon seeing some of the data presented today, some scientists, at least, are cautiously enthusiastic, in part because, they note, Oxford has refrained from hyping its technology until now.

“I think it is all credible,” says Chad Nusbaum, co-director of the Genome Sequencing and Analysis Program at the Broad Institute in Cambridge, Massachusetts. “I would bet they are even underplaying it because they don't want to risk overpromising. It is attractive in that it could put pressure on the market to innovate and lower prices.”

That first taste of sequence arrived in the shape of the genome of a virus, the Phi X phage. Clive Brown, chief technology officer at Oxford Nanopore, told today’s meeting that the company’s system can sequence the entire 5.4-kilobase genome of the virus in one continuous read. However, the machines being launched later this year will initially aim to deliver reads of 100 kilobases. That is still much longer than the fragments typically delivered by today’s machines, and so should provide a more accurate picture of a genome’s true structure, by allowing researchers to generate continuous sequences of regions that now are read out as short pieces of DNA, Brown said.

The potential advantages of the nanopore system are that it could deliver real-time seqeuncing of single molecules at low cost, and should not damage the DNA, so in theory the same molecule can be reanalysed, said Brown.

The Oxford machines will be configured as scalable computer clusters, so that new ‘nodes’ can be added to them, so that users can customize the machines. The initial system will feature a nodes containing 2,000 nanopores that can read DNA at a rate of hundreds of kilobases per second, the company said. Next year, the company will begin selling nodes containing 8,000 nanopores; 20 of these combined would theoretically be able to sequence an entire human genome in 15 minutes, says Gordon Sanghera, Oxford’s chief executive.

Sanghera, adds that the company’s systems will be priced such that large genome centres would pay $25 to $40 per gigabase of sequence this year. That would mean a cost of just a few thousand dollars to sequence a human genome to the standard 30-fold coverage.

The technology has a 4% error rate, meaning that 4% of the bases are read incorrectly, but Brown says that the company is working to cut this down to 0.1– 1% by the time the system launches, which would make it more competitive with current systems.

It is unclear how Oxford Nanopore will affect the landscape of companies that are already pushing genomics into the clinic (see Sequencing set to alter clinical landscape). The firm has not released any data sequenced from human genomes, so it is unclear how its technology would perform with genomes more complex than those of viruses. (The human genome contains more than 3 gigabases of DNA.)

"It's a long way from Phi X to routine human genomes at the accuracy and completeness that are now needed as this moves to the clinic,” says Kevin Ulmer, who has worked in the sequencing industry for decades. “We'll need to see more from sequencing large, complex genomes and then understand the real cost comparison with other platforms.”