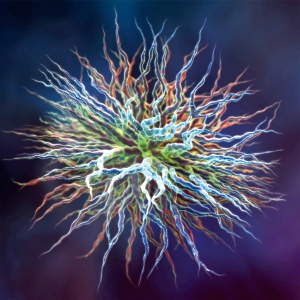 By tacking drugs onto molecules targeting rogue brain cells, researchers have alleviated symptoms in newborn rabbits that are similar to those of cerebral palsy in children. Cerebral palsy refers to a group of incurable disorders characterized by impairments in movement, posture and sensory abilities.

In general, medicines tend to act broadly rather than influence certain sets of cells in the brain. “You don’t expect large molecules to enter the brain, and if they do, you don’t expect them to target specific cells, and immediately act therapeutically — but all of this happened,” says study co-author Rangaramanujam Kannan, a chemical engineer at the Johns Hopkins University School of Medicine in Baltimore, Maryland. The paper is published today in Science Translational Medicine1.

According the US Centers for Disease Control and Prevention, approximately 1 in 303 children have cerebral palsy by age 8, which usually results from neurological damage in the womb, caused by, for example, a kink in the umbilical cord that briefly dimishes the foetus' oxygen, or maternal infection. Such injuries lead to the activation of immune cells in the brain called microglia and astrocytes, which cause further inflammation and exacerbate the damage.

Calming the cells is difficult, because anti-inflammatory drugs don’t easily cross the blood–brain barrier. And those that do tend to diffuse nonspecifically.

“What’s amazing here is that the authors target the drug directly to the microglia,” says Mike Johnston, a paediatric neurologist at the Kennedy Krieger Institute in Baltimore.

The team affixed an anti-inflammatory drug, N-acetyl-L-cysteine (NAC), to synthetic, snowflake-shaped molecules called dendrimers, and injected the conjugates into the bloodstream of newborn rabbits with experimentally injured brains. The dendrimers transported the drug across the blood–brain barrier and released it directly into the activated microglia and astrocytes, halting further inflammation and improving motor function. Control rabbits given NAC alone lost additional brain cells and stumbled in their hops.

The cause of the dendrimers’ attraction to immune cells is unknown. Don Tomalia, director of the National Dendrimer Nanotechnology Center in Mt Pleasant, Michigan, who invented dendrimers in 1979, says, “It’s a mystery as to why these dendrimers intrinsically target inflamed microglia and astrocytes, but it’s brilliant that this happens.”

Taming brain inflammation with targeted drugs would add a sorely needed alternative to current therapies for babies born at risk of cerebral palsy. At the moment, newborns with signs of a brain injury — such as seizures or problems breathing or feeding — are often kept with a reduced body temperature of 33.5 °C for three days, which reduces their chance of developing the disorder by 40%, says Johnston.

Sujatha Kannan, a paediatrician at Johns Hopkins School of Medicine and an author of the study, adds that the new approach could be combined with another potential treatment for cerebral palsy — stem-cell therapy to rebuild damaged nerve tissue. “We feel the best approach would be to suppress ongoing inflammation, and then add on regenerative therapy with stem cells,” she says.

Furthermore, because researchers have recently found that microglia have a role in other neurological ailments, such as multiple sclerosis and Alzheimer’s disease2, the finding could be applied in other contexts. Already, dendrimers are being used in studies on the treatment of diseases ranging from genital herpes to cancer. “People told us not to bother with this experiment because no one thought you could release drugs directly into immune cells in the brain,” says Kannan, who reported previously that dendrimers injected into rats' eyes targeted microglia3. “But somehow,” he says "these dendrimers are special.”