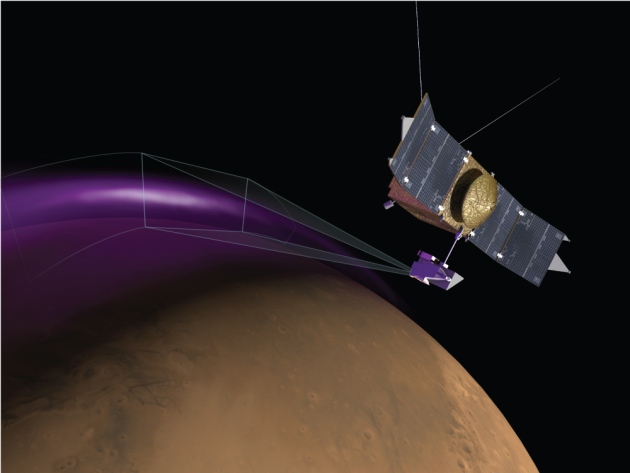 The MAVEN spacecraft (artist's impression) arrived at Mars in September 2014 to study the planet's atmosphere.

NASA's MAVEN spacecraft has discovered a dust cloud billowing over Mars, up to 1,000 kilometres above the planet's surface. The dust does not threaten spacecraft orbiting the red planet, but the unexpected finding poses big challenges to atmospheric researchers, who are trying to explain where the cloud came from.

“This is the first discovery of dust or debris at orbital altitudes around Mars,” says Bruce Jakosky, a planetary scientist at the University of Colorado Boulder and the mission's principal investigator. “It's hard to understand how this stuff got here.”

Jakosky reported the finding on 18 March at the Lunar and Planetary Science Conference in The Woodlands, Texas. But the dust cloud was not the only new finding from the MAVEN (Mars Atmosphere and Volatile Evolution) craft, which has also discovered a diffuse, aurora glowing above Mars's northern hemisphere.

The spacecraft arrived at Mars last September to fly through and study the planet's upper atmosphere. One of its instruments, called the Langmuir Probe and Wave instrument, measures the densities and temperatures of electrons. It has picked up small whiffs of plasma that form when dust hits the spacecraft and vaporizes, says Jakosky. Similar tiny impacts have been measured elsewhere in the Solar System by other spacecraft, such as the Voyager and Cassini probes, but have never previously been found at Mars.

The dust seems to be concentrated between about 150 and 500 kilometres above the Martian surface, and there is more on the day side, the hemisphere lit by the Sun, than on the night side of Mars. It has been seen ever since the spacecraft arrived at Mars, so it is not related to Comet Siding Spring, which whizzed past the planet in October and dumped a load of fresh dust in the Martian atmosphere.

The dust may have come from earlier comet visits, or have arrived from outside the Martian system in another way. Another possibility is that it is being shed from Mars's moons, Phobos and Deimos. It might even have been kicked up from the surface somehow.

Separately, MAVEN has spotted a diffuse aurora unlike anything seen before at the planet. Mars does not have a planet-wide magnetic field as Earth does, so it does not have regular northern and southern lights like those seen above Earth's poles. However, in 2005 the European Space Agency's Mars Express team reported auroras glowing above patches of the Martian surface that have a magnetic field1.

For five days in December, MAVEN saw another dim aurora, which the team dubbed the “Christmas lights”. Rather than being focused above specific magnetic features, it was distributed across the entire northern hemisphere. It appeared at the same time as a storm of charged particles was blasting from the Sun and past Mars: the particles penetrated deep into Mars's atmosphere, down to altitudes where the aurora appeared, so the solar storm might have caused the aurora.

Jasper Halekas, a space physicist at the University of Iowa in Iowa City, says that the MAVEN findings are already rewriting what scientists know about the magnetic realms around Mars. “It's not your grandfather's magnetosphere,” he says.