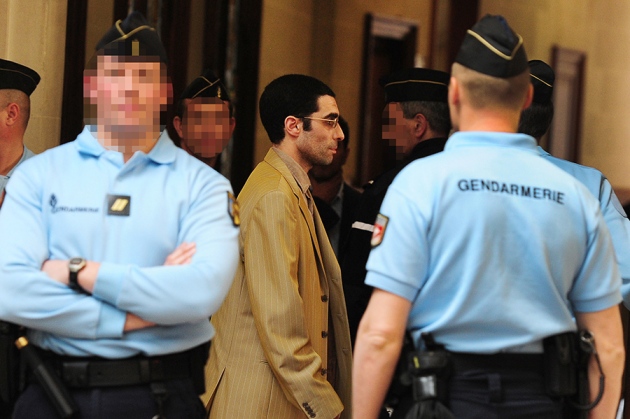 Adlène Hicheur at his trial in France in 2012. The physicist moved to Brazil a year later, but has now been deported to France, to the dismay of his colleagues.

At around lunchtime on 15 July, police removed particle physicist Adlène Hicheur from his home in Rio de Janeiro and escorted him to the airport. That evening, they commanded him to board a flight to Paris, accompanied by three Brazilian police officers. From there, he was transported to his parents’ home in the small southeastern town of Vienne and placed under house arrest. He must report to police three times a day and cannot leave home between 8:00 p.m. and 6:00 a.m..

Two months later, the reasons for Hicheur’s sudden deportation remain a mystery. In 2012, a French court convicted him of plotting with al-Qaeda’s North African branch to carry out terror attacks on military and economic targets on French soil. Hicheur and his supporters, including scientific colleagues, maintain his innocence and say his trial was a miscarriage of justice. Brazilian authorities had discussed his past with scientists before allowing the physicist to come to work in Brazil in 2013.

Once back in France, Hicheur was placed under house arrest using state-of-emergency powers introduced following a spate of terrorism attacks; officials there say that he still constitutes a security threat.

His colleagues, with the backing of several institutions, are ramping up their pleas to Brazilian authorities to explain the reasons for the deportation. They are concerned that it violated Brazilian law and breached Hicheur’s human rights. Neither Hicheur nor his institution, the Federal University of Rio de Janeiro (UFRJ), has been given a justification for his deportation, UFRJ colleagues say, and Hicheur had no chance to contest its legality.

“His deportation without any explanation is something that makes me feel ashamed for my country,” says Ron Shellard, director of the Brazilian Center for Physics Research (CBPF) in Rio de Janeiro. “If there is no objective reason for this extreme act, the Brazilian government should revoke the act of deportation and request the French authorities to send him back to Rio.”

At the airport, Hicheur repeatedly requested that he be sent to Algeria (the nationality on his Brazilian work visa) or anywhere other than France, fearing that he would be confined under the state-of-emergency laws, says Ignacio Bediaga, a physicist at the CBPF. Bediaga and three UFRJ officials had rushed to the airport and remained with Hicheur until his flight took off. “In my opinion, Dr Hicheur was illegally extradited, at the request of the French government,” Bediaga says.

Collaborators at CERN, Europe’s particle-physics laboratory near Geneva, Switzerland, and at other European laboratories, have also expressed solidarity with Hicheur. And an international group of researchers has written to French President François Hollande, asking him to intervene to lift the physicist’s house arrest — but has received no reply. Neither French nor Brazilian authorities had responded to Nature’s requests for comment by the time this article went to press.

Hicheur says his latest problems began in January, when the Brazilian magazine Epoca splashed his French conviction on its front page under the headline “A terrorist in Brazil”. A deluge of media coverage followed. “I was an invited professor at the UFRJ with a smooth, peaceful life, until the craziness reached me again,” Hicheur says.

“His deportation without any explanation is something that makes me feel ashamed for my country.”

After Hicheur’s deportation, the justice ministry issued a brief statement saying little more than that the decision was based on a recommendation by the federal police, and that Hicheur’s presence was an “inconvenience to the national interest”. In an interview with the newspaper Folha de S.Paulo, justice minister Alexandre de Moraes said Hicheur had not communicated with terrorist groups, or committed any crime while in Brazil. But he said he felt it was “absurd” to allow someone who had been convicted of terrorism-related offences to live and work in the country. “Furthermore, he is a nuclear physicist, who, in a laboratory, has all the material at hand,” he added — apparently unaware that Hicheur studies the physics of fundamental particles.

But Shellard says that he discussed Hicheur’s past with Brazil’s foreign office when he and others invited the physicist to Rio in 2013. Because Hicheur had served his prison term in France, and had recommendations from leading scientists, officials had no problem with his coming to Brazil.

Concern over the case is growing. On 1 September, researchers at the UFRJ’s Laboratory of Elementary Particles petitioned Brazil’s justice, science and education ministries to release Hicheur. The petition has now been signed by more than 300 people: mostly Brazilian physicists, but also a large contingent of researchers from European institutes. And on 5 September, a general assembly of the particle-physics section of the Brazilian Society of Physics — held at the society’s annual meeting in Natal — agreed unanimously to send a letter to de Moraes, expressing concern that the society’s board still hasn’t received an explanation for the deportation, two months after it was first requested.

Bediaga and other researchers are convinced that repressive measures in the run-up to Rio’s Olympic games, combined with media coverage of Hicheur’s earlier conviction, were linked to the decision to deport the physicist.

Nadine Borges, a lawyer and human-rights expert at the UFRJ, says that she is taking up Hicheur’s case in a personal capacity. In France, Hicheur’s lawyers filed in July to have his house arrest lifted, but the request was quickly rejected by a Grenoble tribunal. Hicheur says he now will appeal to a higher court.