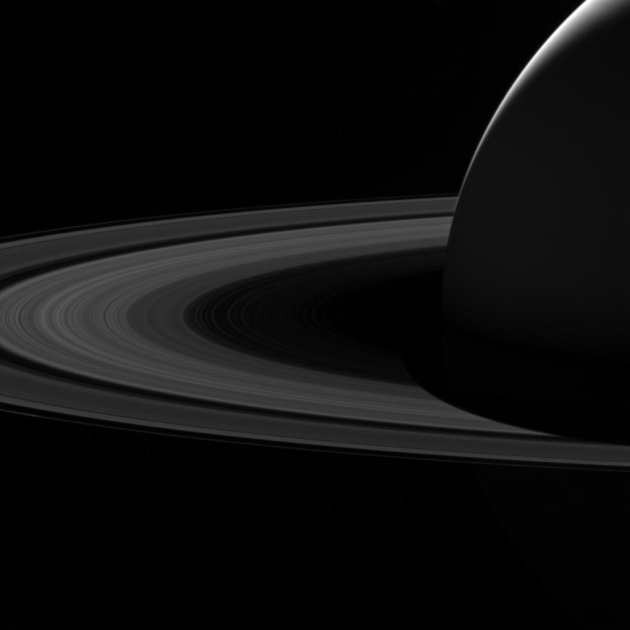 Saturn's rings are made of whirling bands of ice and dust.

NASA's Cassini spacecraft continues to yield surprising discoveries, more than a month after it burned up on its mission-ending dive into Saturn. New data from the probe suggest that Saturn's majestic rings are showering tiny dust particles into the planet's upper atmosphere, where they form a complicated and unexpected chemical mix.

A mass spectrometer aboard Cassini detected the strange chemistry as the probe spent its final five months looping between Saturn and its rings.

“We really hit the jackpot,” said Mark Perry, a planetary scientist at the Johns Hopkins University Applied Physics Laboratory in Laurel, Maryland. He reported the findings on 17 October at a meeting of the American Astronomical Society’s Division for Planetary Sciences in Provo, Utah.

Mission scientists had expected Cassini's mass spectrometer to spot the signature of water molecules as the spacecraft slipped between the planet and its rings. In the 1970s and 1980s, NASA's Pioneer and Voyager missions found fewer charged particles than expected in Saturn’s uppermost atmosphere. On the basis of those data, researchers proposed in 1984 that water molecules coming off the rings — mostly in the form of ice — act as catalysts to strip charged particles from the atmosphere1. Cassini's final months gave scientists their first opportunity to test this idea directly.

But it wasn't evidence of water that jumped out at Cassini's science team. Data from the mass spectrometer revealed a witch’s brew of chemicals, including methane, a molecule that could be carbon monoxide and more-complex molecules. The concentrations of these chemicals are greatest around Saturn’s equator and at high altitudes, which suggests that the material is shedding off the planet’s rings.

The deeper the probe went into the atmosphere, the stranger the measurements became. Cassini’s closest swings past Saturn's surface revealed a panopoly of heavy molecules, Perry told conference attendees. The scientists have not yet pinpointed each type of molecule, but clearly, there is much more than just water around.

By analysing the types of material that could be coming off the rings, Perry’s team concluded that the debris must be fragments of tiny dust particles, which measure just 1 to 10 nanometres across but are relatively heavy. When these particles spiralled off the rings and slammed into Cassini’s mass spectrometer, they shattered into smaller pieces.

Exactly how those particles make the journey from the rings to the atmosphere remains to be seen. “We have a lot of work to do to understand how they are getting in there,” Perry said. “None of the models predict this.”

On these final plunges, pulled along by Saturn’s gravity, Cassini was zooming along at more than 30 kilometres per second — a speed more than four times greater than the mass spectrometer was designed to withstand. “These are higher speeds than anything it has ever seen,” noted Linda Spilker, a planetary scientist at the Jet Propulsion Laboratory in Pasadena, California, and Cassini’s project scientist.

At such enormous speeds, anything that Cassini rammed into would have splintered into bits.