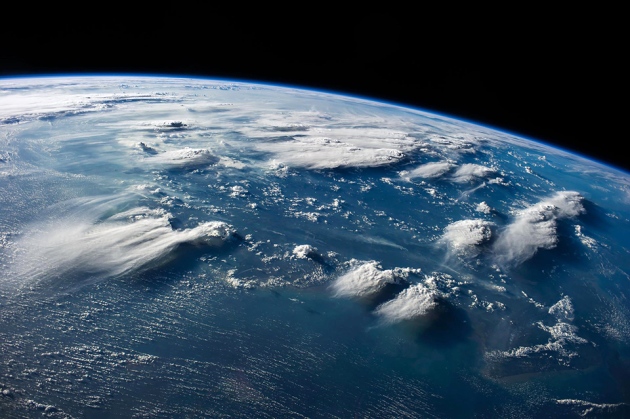 If oriented just right, ice crystals in clouds can reflect enough sunlight to be seen from over a million kilometres away.

Mysterious flashes of light that show up on satellite images of Earth's landmasses have puzzled researchers for a couple of years. Now, scientists have finally pinpointed the culprit: ice crystals floating high above the planet's surface.

The finding could help refine ideas of how clouds regulate the Earth's temperature. And it could aid scientists looking for Earth-like exoplanets orbiting other stars. Glinting exoplanets may contain water and be “potential Earth twins”, says Tyler Robinson, a planetary scientist at the University of California, Santa Cruz, who wasn't involved in the study.

Alex Kostinski, a physicist at Michigan Technological University in Houghton, and his colleagues solved the mystery using images from an instrument on board the Deep Space Climate Observatory (DSCOVR). The satellite launched in 2015 and is parked 1.5 million kilometres away from Earth.

Space-based instruments have captured such glints before, but never from this distance, the team reported this week in Geophysical Research Letters1. In fact, “we didn’t expect to see it this far away”, says Kostinski. “It’s quite amazing.”

A hint of sunlight

These flashes, which researchers call glints, occur when sunlight bounces off a smooth, mirror-like surface such as a body of water or flat ice crystals in a cloud. These reflections only occur at specific latitudes, where the angle of light from the Sun to Earth matches that between Earth and the observing spacecraft.

Kostinski and his colleagues mapped out the latitudes at which glints could occur and the places where bright spots appeared over land on DSCOVR-produced images, and found that they matched. That suggested the flashes were glints and not lightning strikes or glitches in the instrument that produced the images.

“At that point, we began to suspect ice crystals in clouds because they’re flat,” says Kostinski. “But how do you prove it?”

The absorption from glints on the DSCOVR images matched that expected from reflections off an object 5–8 kilometres off the ground. This suggested that mirror-like ice crystals in mid to high-altitude clouds were behind the mysterious flashes of light.

Some of the flashes collected by a camera on DSCOVR were so bright that they temporarily overwhelmed the instrument’s sensors, even at 1.5 million kilometres away. “That’s a really strong signal,” says Mark Swain, an astrophysicist at the Jet Propulsion Laboratory in Pasadena, California.

“That’s super exciting,” he says, because it means these glints might be bright enough to detect if they appear on exoplanets. These flashes could be a marker that helps researchers determine whether an exoplanet has water or not.

These other worlds are so far away that any perceived glints would probably come from oceans or larger bodies of water, not from tiny ice crystals in the atmosphere, says Robinson. “The patch of the planet that has the ice cloud on it is likely going to be itsy-bitsy,” he says — unless a planet is covered in ice clouds.

Still, these results have got exoplanet researchers fired up. “What’s exciting to me is the potential for this effect with different materials other than water ice, and different types of exoplanet atmospheres,” says Swain. Then the effect could “be stronger and that might have ramifications for how we study exoplanets in the future”.