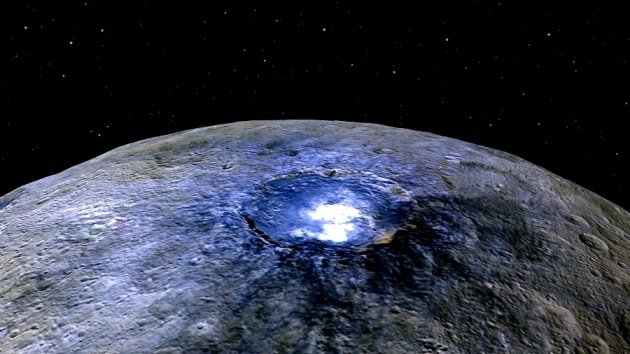 The verdict is in — mostly. The bright spots on the dwarf planet Ceres are probably made of salt, NASA’s Dawn spacecraft has found.

Mixed with the salt are bits of rock and frozen water. When sunlight hits the blend, the ice sublimates into a misty haze above two of Ceres’s craters, researchers report in the 10 December issue of Nature.

But mission scientists are not sure how the salt, ice and haze are interlinked. “The whole picture we do not have yet,” says Andreas Nathues, a planetary scientist at the Max Planck Institute for Solar System Research in Goettingen, Germany, and the paper’s lead author1.

Dawn has also found ammonia-rich clays on Ceres, a second Nature paper reports2. Ammonia is more common in the frigid outer Solar System than in the asteroid belt where Ceres reigns. The discovery suggests that Ceres may have collected bits of outer Solar System material — or even that it was born near Neptune before migrating inward.

Both papers are the first major published results from Dawn. The spacecraft, which launched in 2007, visited the asteroid Vesta in 2011–12 and arrived at Ceres in March.

At 950 kilometres across, Ceres is not only the largest asteroid in the Solar System, but also a protoplanet whose origin and evolution may help researchers to better understand how other planets formed. Scientists previously calculated that roughly one-quarter of Ceres is water, which may lurk as an icy shell beneath the dwarf planet's dark surface.

The bright spots are the first direct glimpse of that underground ice. Dawn has catalogued more than 130 such spots, most of them within impact craters. The brightest lies in the 90.5-kilometre-wide Occator Crater, and the second-brightest is in the 10-kilometre-wide Oxo Crater. (Features on Ceres are named after agricultural deities.) 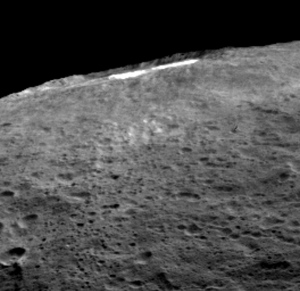 Dawn spotted haze only in Occator and Oxo, Nathues says. The spacecraft’s camera captured it glimmering beneath the rims of the craters in the morning sun, then vanishing by afternoon. The haze probably forms when sunlight warms the surface, causing ice to sublimate and carry dust and ice particles upward. When the surface cools, the sublimation ceases and the haze disappears. In 2014, researchers analysing measurements made by the Herschel Space Observatory reported water vapour in the atmosphere of Ceres near Occator3.

Some kind of geological process seems to continually feed ice to the surface, replenishing what is lost, Nathues says. Occator and Oxo are both relatively young craters, and the other bright spots on Ceres might represent older impacts where outgassing has stopped.

Dawn will never be able to spot the haze again. The spacecraft could only photograph it from an oblique angle as it first approached Ceres.

Nathues’ team also looked at spectra of light reflecting off the bright spots. Those measurements suggest that the spots contain salt, which is most likely to be a type of magnesium sulfate.

Alexandra Witze talks about the Dawn mission to Ceres.

In the second study, other Dawn scientists reported finding ammonia bound up in clay minerals across the dark surface. Scientists had reported hints of ammonia on Ceres before, based on ground-based spectral studies4, but these data could also be interpreted as coming from other minerals, says Andrew Rivkin, a planetary scientist at the Johns Hopkins University Applied Physics Laboratory in Laurel, Maryland.

The new spectra confirm the presence of ammonia. Normally ammonia is found far out in the outer Solar System, beyond Neptune, says team leader Maria Christina De Sanctis, an astronomer at the Istituto di Astrofisica e Planetologia Spaziali in Rome.

One possibility is that ammonia-rich space rocks fell onto Ceres, which was large enough to have sufficient heat from its radioactive interior to partially melt and process the debris into ammoniated clays, says Carol Raymond, a planetary scientist at NASA’s Jet Propulsion Laboratory in Pasadena, California, and deputy principal investigator on Dawn. “That’s a pretty nice story,” she says.

Many questions remain. De Sanctis and her colleagues are analysing new spectral data on the bright spots, which may support or rule out the presence of salts. “It’s really enticing,” she says.

Dawn is currently spiralling down to its final mapping orbit, which it will reach on or before 18 December. From there it will study Ceres from a distance of about 385 kilometres until the mission runs out of money to operate the spacecraft or it can no longer point itself in the right direction.