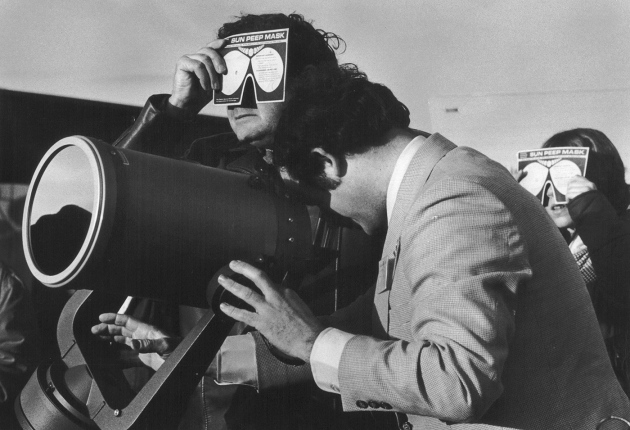 Over the centuries, scientists have used total solar eclipses (such as one in 1979, above) to make fundamental advances.

When the Moon’s shadow races across the continental United States on 21 August, researchers will be waiting — in planes, on mountaintops and at other carefully chosen vantage points along the roughly 110-kilometre-wide path of totality. Thanks to the sheer number of observers, solar physicists hope to learn more from this latest total solar eclipse than from any previous such event, and to use that knowledge to develop tools for next time.

“The beauty of eclipses is, each time you find something and then the next time you try to look for something else to enhance your science,” says Shadia Habbal, a solar physicist and long-time eclipse chaser at the University of Hawaii at Manoa in Honolulu.

Total solar eclipses, which occur about once every 18 months, provide the best chance to study the Sun’s corona — the ethereal wisps of superheated plasma that are usually obscured by glare from the solar surface (see ‘Citizen science’). Solar researchers typically use instruments called corona-graphs that physically block the Sun’s disk and reveal the surrounding corona. But corona-graphs, which are installed on satellites and ground-based telescopes, are not ideal; to protect other instruments from potential damage caused by stray sunlight, they obscure an area slightly larger than the solar disk, blotting out a bit of the corona. 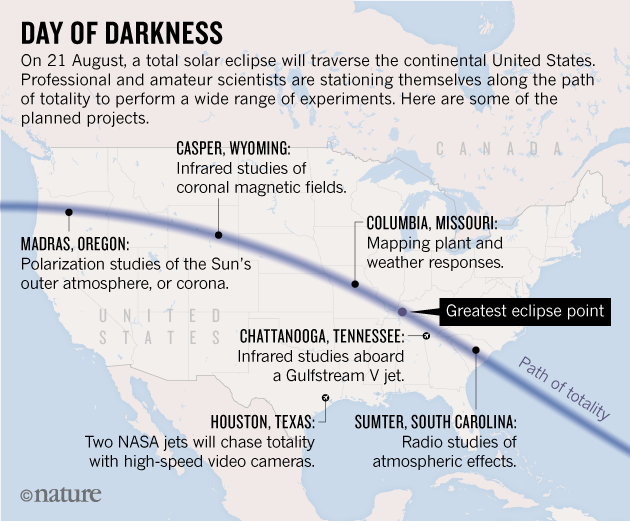 The Moon blocks the Sun perfectly during a total solar eclipse, enabling better views of the corona than when using a coronagraph. Over the centuries, astronomers have used eclipses to make fundamental advances, such as discovering helium and confirming Albert Einstein’s general theory of relativity (J. M. Pasachoff Nature Astron. 1, 0190; 2017).

During the coming eclipse, one major effort will use a US National Science Foundation Gulfstream V plane to probe magnetic flows in the solar corona at infrared wavelengths, which can be difficult to measure from the ground (see ‘Day of darkness’). In the past, researchers have focused on studying the corona at ultraviolet wavelengths from space, and at visible wavelengths from the ground. But now, infrared detectors have become sensitive enough to begin opening a new window on the corona, says Jenna Samra, a graduate student at the Harvard-Smithsonian Center for Astrophysics (CfA) in Cambridge, Massachusetts, who helps to lead the project.

Infrared studies reveal more about the corona’s magnetic fields, where energy is unleashed in powerful currents from the Sun’s surface up into the atmosphere. “We’ve been missing this piece of the puzzle,” says Chad Madsen, a postdoctoral fellow with the project at the CfA. The infrared instrument aboard the plane will gather detailed spectral information at several locations around the solar corona. The distance between certain lines in the spectrum reveals the strength of the magnetic field in that location — information that can’t be measured directly otherwise.

Pilots will fly the plane to a height of about 15 kilometres, to escape any clouds, and will catch about 4 minutes of totality on its path through Missouri, Kentucky and Tennessee. Testing equipment such as the infrared spectrometer on the plane will allow scientists to develop next-generation technologies that could be flown into space to gather data cheaply and quickly for a range of scientific applications, says Scott McIntosh, director of the National Center for Atmospheric Research’s High Altitude Observatory in Boulder, Colorado.

Similarly, NASA is sending two jets, once used to monitor space-shuttle launches, to chase totality. They will carry high-speed video cameras to capture the movement of the corona’s wispy filaments. “Ideally, we’re going to discover some mechanism that carries enough energy into the corona to heat the corona,” says Amir Caspi, an astronomer at the Southwest Research Institute in Boulder who is leading the effort. “Until now, that’s been very elusive.”

“I have not been an eclipse chaser until now, but this is certainly sparking the bug.”

The jets will fly one after the other, and together will collect data from more than seven minutes of totality. Along with taking infrared measurements, they will create the first-ever thermal map of the planet Mercury and hunt for vulcanoids — small asteroids that might lie between Mercury and the Sun.

Meanwhile, researchers will fan out across the ground for additional studies — such as Habbal’s long-running work to make temperature maps of the solar corona. This year, she will have 30 people at 5 sites across the western United States using enhanced detectors to look for spectral lines from superheated elements such as iron and argon. “This tells us about the chemistry of the corona,” she says, data that are otherwise hard to gather.

In a valley in Idaho, a French team will analyse spectral lines in the corona, in part to support the infrared work of the CfA team, says Serge Koutchmy, an astronomer at the Institute of Astrophysics in Paris. The group will also use new light-detecting instruments to continue a project to measure the Sun’s radius — which is not known precisely — by studying how the star’s light dips as the Moon slips on and off its face (P. Lamy et al. Solar Phys. 290, 2617–2648; 2015).

Depending on how things go, the 21 August eclipse may spawn a new generation of eclipse scientists. “I have not been an eclipse chaser until now, but this is certainly sparking the bug,” says Caspi. “I’m very much looking forward to trying to do this thing again.”