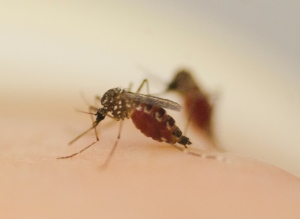 An Aedes aegypti mosquito on the arm of Leslie Vosshall, a biologist who studies the species' sense of smell.

Mosquitoes that are genetically modified to lack some of their sense of smell cannot tell humans from other animals and no longer avoid approaching people who are slathered in bug spray. These findings, published online today in Nature1, could help scientists to design insect repellents to combat malaria, dengue and agricultural pests.

Some mosquito species will feed on most animals that they encounter. Aedes aegypti, the mosquito that carries dengue and yellow fever, and Anopheles gambiae, which hosts the malaria parasites, are choosier: they prefer humans.

“They love everything about us,” says Leslie Vosshall, a neurobiologist at The Rockefeller University in New York, who led the latest study. “They love our beautiful body odour, they love the carbon dioxide we exhale and they love our body heat.”

Mosquitoes have specialized sensing systems for detecting carbon dioxide and body heat, but body odour is the only one of these features that distinguishes humans from other warm-blooded animals.

Vosshall’s team genetically engineered A. aegypti mosquitoes to lack the gene orco, which makes a protein that helps build the receptor molecules that sense many smells.

A series of experiments showed that without the Orco protein, the mosquitoes struggled to distinguish the smell of honey from that of glycerol (an odourless liquid of similar consistency), and humans from other animals. “It’s sort of like a game show where the mosquitoes are released into a box and we ask them to choose door number one, where there’s a human arm, or door number two, where there are our beloved guinea pigs,” says Vosshall.

The mutant mosquitoes that did pick the scent of the human arm, however, did not hesitate to approach it. Vosshall says that orco and the smell receptors that it produces are important for picking between hosts, but not for finding and feeding on them.

The engineered mosquitoes were also unable to smell the insect repellent DEET (N,N-diethyl-meta-toluamide) from a distance. A normal mosquito would avoid DEET, but the mutants were shown to land on a human arm slathered in the repellent. But on landing, instead of settling in for a blood meal, they fled, suggesting that DEET can deter mosquitoes not just via its smell but also via direct contact.

Vosshall’s team is now trying to work out which other sensations repel mosquitoes. “It’s unbelievable to me that people have been spraying DEET on skin for upwards of 60 years. We don’t have any clear idea of how or why it works, and that as a scientist just drives me crazy,” she says.

Laurence Zwiebel, a molecular entomologist at Vanderbilt University in Nashville, Tennessee, says that Vosshall's study shows that DEET does not work by simply blocking the smells that are conveyed by Orco, because mosquitoes without the gene are still attracted to humans. A more probable scenario is that DEET jams a mosquito’s sensory system, he says. “We all know being in a room with too much sensory stimulation is pretty aversive.”

Male mosquitoes genetically engineered to produce unviable offspring have shown promise in field trials in reducing populations of A. aegypti. But Vosshall and Zwiebel dismiss the idea of releasing mosquitoes that cannot discriminate between humans and other animals.

Instead, the work underscores orco as a possible target for a new generation of insect repellents. Zwiebel’s team is developing molecules that overactivate the protein2, in an attempt to see whether it scrambles insects' sense of smell. Almost all insects have orco, so a chemical that targets the gene could help to keep pests away from economically important crops.

“We’re not looking to kill these insects, per se, we just want them to feed on something else,” says Zwiebel.